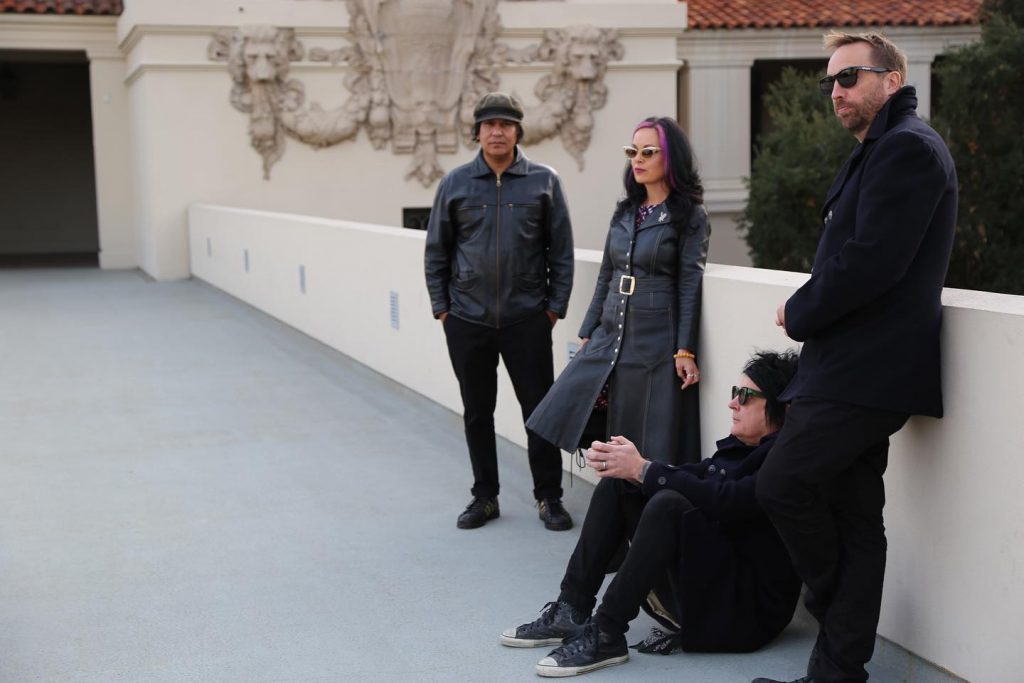 Los Angeles based alternative/post-punk/desert rock outfit All Souls featuring Tony Tornay (Fatso Jetson, Josh Homme’s Desert Sessions) Antonio Aguilar and Meg Castellanos (both Totimoshi) and Erik Trammell (Black Elk) unveil a music video for the latest single »Winds« taken from their new studio album, »Songs For The End Of The World«, which was released on October 2nd, 2020 via Sunyata Records.

Video is directed by Josh Graham / Suspended In Light.

All Souls formed in Los Angeles in the winter of 2016 and have gone from playing local gigs to performing in theaters and arenas. They were recently hand-picked to tour with Tool, The Jesus Lizard, Melvins and Meat Puppets.

All Souls creates songs that are lyrically dark, infused with the band’s unique style and perspective on the state of today’s world. Their music has been described as intelligent, majestic, exciting and original. They are unafraid to bridge into big open spaces discovering new wastelands; ultimately stepping from dark to light.

Throughout 2016, the quartet recorded what would become their self-titled debut album, during intermittent sessions at Sound of Sirens Studio in Los Angeles with producer Toshi Kasai known for his work with Tool, Foo Fighters and Melvins.

Following tours with the likes of Red Fang, The Sword, Kvelertak and Torche, the band released »All Souls« in 2018 via Sunyata Records – the label founded by iconic Screaming Trees and Mad Season drummer Barrett Martin. Earmarked by Spaghetti Western-style expanse and rough-and-tumble riffing, the music proudly bears the wild wear-and-tear of the ’90s Palm Desert scene with a twist of psychedelic voodoo and metallic edge.

For Aguilar and Castellanos, the music spoke to a dormant primal need that harked back to their time in the fan favorite underground mainstay Totimoshi.

All Souls just completed second album which they recorded in 2019, »Songs For The End Of The World«, reunites them with Kasai. This follow-up recording is an evolution for the band. Aguilar’s distinctive vocals are at times lyrically bleak and deeply personal, set against a musical backdrop that challenges listeners with inventive songwriting and ethereal melodies. Tornay’s explosive drumming matched with Trammell’s innovative guitar and Castellanos’ low end and feminine back-up vocals lend to their power and unique approach. One could say they are connecting the dots between Led Zeppelin to The Pixies, Soundgarden to The Cure all the while carving their own road with authenticity.