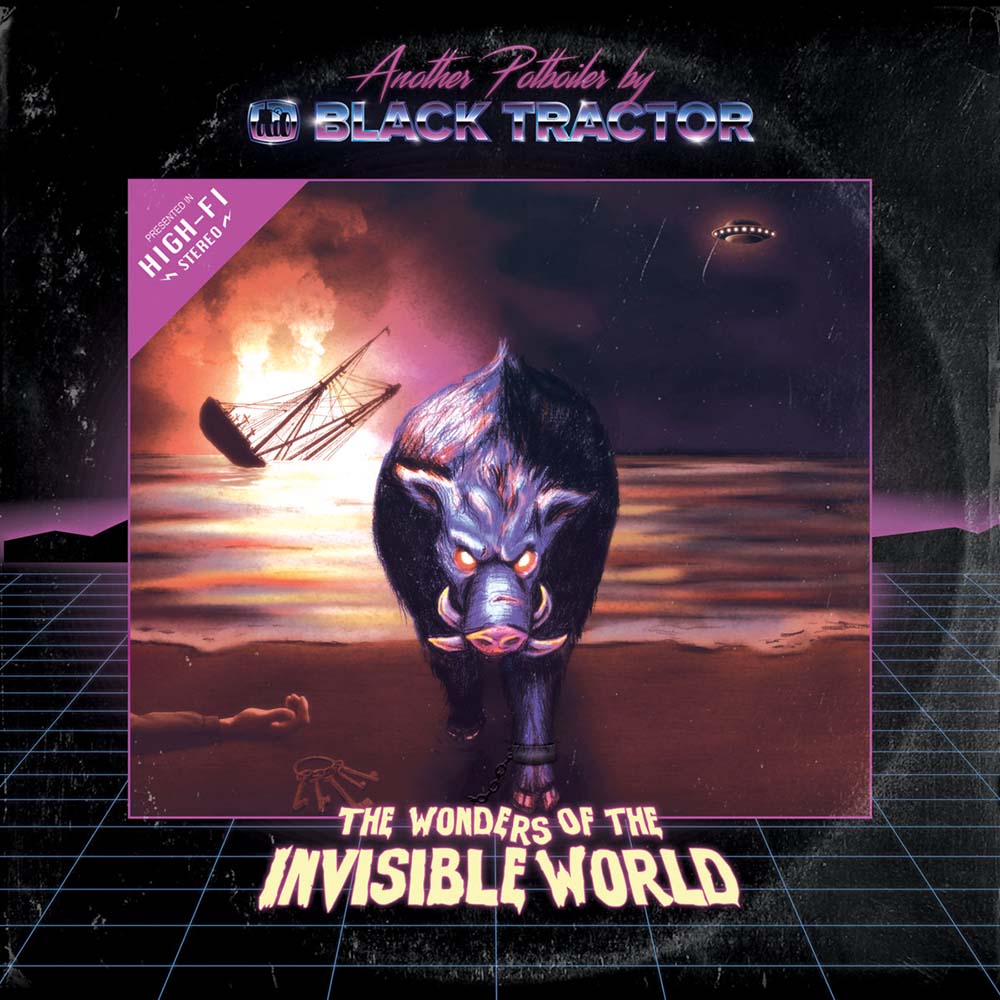 Cincinnati, Ohio based rockers Black Tractor are releasing their album, »The Wonders Of The Invisible World«, on vinyl tomorrow.

»The Wonders Of The Invisible World« was originally released on August 20th, 2019.

Rock n’ roll and blasphemy have long sauntered hand-in-hand, but some bands like to see how far they can push the boundaries. Cincinnati’s Black Tractor, who have been chugging along at their own pace for twenty years, are no strangers to contention – their latest in four releases, entitled »The Wonders Of The Invisible World«, is chock full of the absurd and inappropriate, backed by a soundtrack that is, in their words, “heavy enough for the fellas but danceable enough for the ladies”. Released originally back in 2019, it’s time now for this unique and remarkable record to come out on vinyl.

Peeling back the onion-like layers of the music takes some doing, but each brings its own reward. The surface level reveals a stoner rock/metal sound akin to Alabama Thunderpussy and Orange Goblin, where fun-loving riffs collide with screaming solos and melodies. Buzz and Tungsten, the new faces in the band, bring the heavy in the rhythm section, allowing El-Sid and Rock High to rock out. There’s no set formula – the spectrum of genres stretches from punk rock acoustic folk, 70s AM ballads to head-spinning noise rock, and yet all packaged in a cohesive way.

Leading the wild goose chase is the roupy, crazed voice of frontman Johnny Potatoes. His lyrics, confronting humanity’s complex relationship with God, take on a distinctly Garth Ennis Preacher vibe in the swirl of sex, alcohol, and broken homes. There’s a twisted sense of humor that permeates tracks like »What God Made Pockets For« and »Just Like Fay Wray«, and it goes deeper as the record unfolds. By the time we hit »Hosanna« (a torture country ballad) and »The Third One« (a stomper about burning witches), the full vision of Black Tractor has unfolded into a disturbing insight into society.

It’s not just on record that the band court controversy. The band’s initial album release show was a sacrilegious spectacle “mimicking Bible Belt tent revivals and charlatan clergymen who would empty the pockets of their naive flock”. The show since then has grown exponentially to include, among other things, drunken monks, lascivious nuns, and a raised pulpit with lasers. Sounds like fun.

Black Tractor may refer to their records as ‘potboilers’ in self-deprecation, but there’s more than meets the eye here. If genre-bending is your bag and you don’t bat an eye at controversial lyrics, then »The Wonders Of The Invisible World« are yours for the tasting.