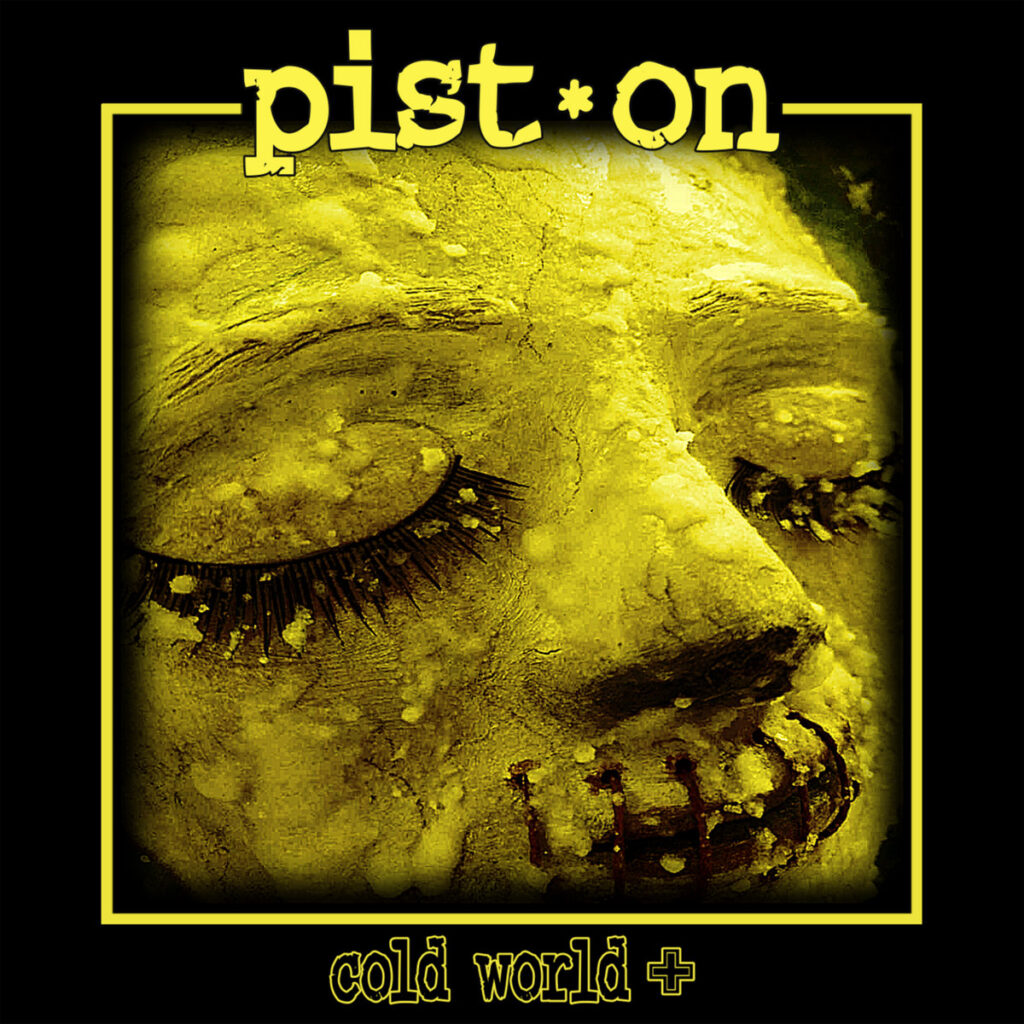 Brooklyn alternative metal veterans Pist.On have signed with M-Theory Audio for the expanded CD edition of »Cold World« EP including several bonus tracks, which will be released on July 29th, 2022.

Says the band: “Check it out Pist Army people! We’re happy to announce that we’ve partnered with M-Theory Audio for the physical release of our »Cold World« EP. It will be available as a specially expanded CD, titled »Cold World+«, with additional tracks including the »Saves« EP, four previously unreleased demo tracks from 1999 and 2021, and »Exhume Her« from the Metal Blade compilation, »Metal Massacre XII«. Release date is set for 29th July.
The »Cold World+« CD is available for pre-order now at www.smarturl.com/piston. Keep checking in for updates.”

Rejuvenated Brooklyn alternative metal powerhouse Pist.On has signed with M-Theory Audio. The band – who released two albums in the late 1990’s and were stalwarts of the era’s Brooklyn heavy metal scene – reunited for live performances in 2018, and last month, digitally released the »Cold World« EP, their first new music in over 20 years. M-Theory Audio will be releasing the EP physically as a specially expanded CD edition later this year titled »Cold World+«. Additional bonus tracks will include their self-released 2001 EP »Saves«, four previously unreleased demo tracks from 1999 and 2021, and »Exhume Her«, the band’s contribution to Metal Blade’s 1995 compilation, »Metal Massacre XII«.

States frontman Henry Font, “We’re happy to be partnering with M-Theory. Looking forward to working together and the CD release is a great opportunity to take another step forward on the Pist.On journey.” 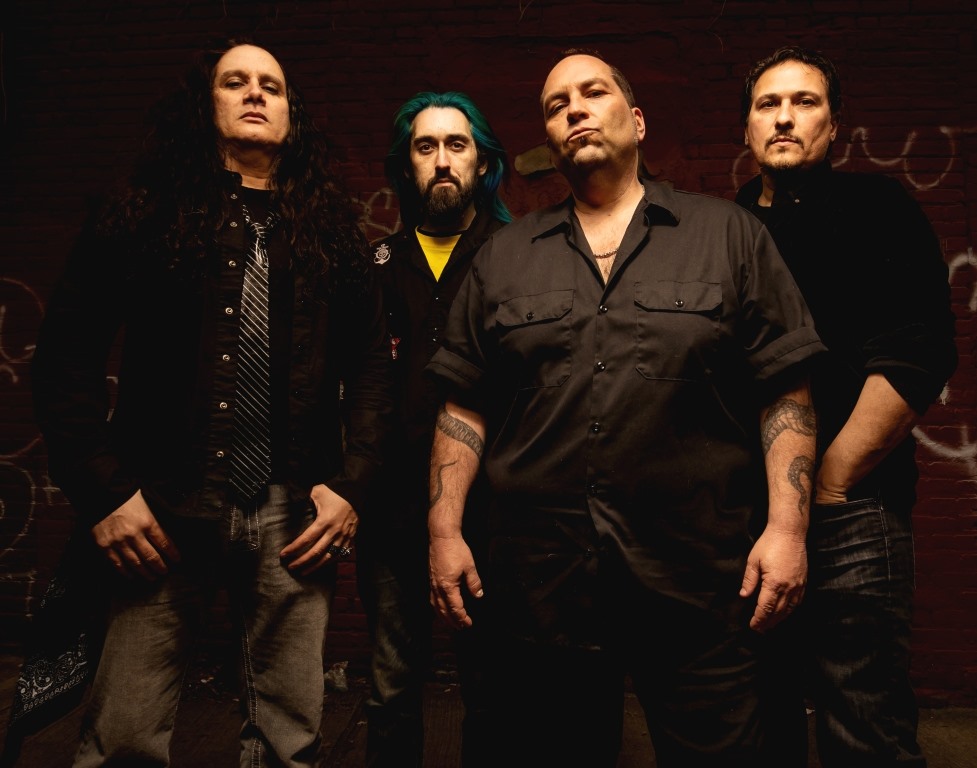 Pist.On was birthed out of the same early 1990’s Brooklyn heavy metal scene that gave rise to seminal acts of the time such as Type O Negative and Life Of Agony. The group’s blend of down-tuned groove-metal riffs, alternative-metal songwriting, and gothic aura saw them gain a fanatical following within the scene, attracting the attention of Type O Negative keyboardist/producer Josh Silver. Two demos – the latter of which was produced by Silver – and incredible live performances soon followed, culminating in the release of Pist.On’s 1996 debut record, »Number One«, also produced by Silver. A retrospective review of »Number One« from Sputnik Music recommended the album for those that “like the groovy chugs of Crowbar mixed with the haunting gothic pathos of Type O Negative, all while still sounding like it could’ve played on Grand Theft Auto: San Andrea’s Radio X.”

Subsequent touring alongside Type O Negative and Marilyn Manson saw Pist.On further build their reputation as an exciting act on the rise, attracting the attention of Atlantic Records who re-released »Number One« a short time later. Further touring alongside bands as diverse as Korn, Clutch, Fu Manchu, Queensrÿche and The Misfits saw the band continue to gain new fans. Pist.On released their 1999 follow-up, »$ell Out«, on Mayhem Records/Music For Nations. More live shows and the band’s self-released 2001 »Saves« EP came in the aftermath, followed by the group deciding to take time out from the business that year. Though never officially splitting up, the intended short break turned in to an unplanned hiatus lasting more than fifteen years.

In 2017 Pist.On eased their way back into working on new music retaining the core of the »$ell Out« line up, with Henry Font on vocals/guitar, guitarist Burton Gans and drummer Jeff McManus together with new bassist Jack Hanley (ex-The Deadlyz).

The group made a return to the live stage in 2018 with appearances at high profile European festivals Sweden Rock and Graspop Metal Meeting followed by shows in the USA. The reformed Pist.On also commemorated the comeback with a digital re-release of their 2001 EP, »Saves«, and made their return to the United Kingdom for more live performances in March 2019.

Pist.On unveiled their first new studio recordings in March 2022 with the digital release of their new EP, »Cold World«. The songs were recorded at Flatline Audio in Denver, Colorado, produced, mixed, and mastered by Dave Otero (Allegaeon, Cattle Decapitation, Khemmis). UK’s Metal Hammer described the new EP as “a fun-loving mix of the ominous and the infectious” while The Razor’s Edge declared the new music from Pist.On as “an E.P. of opposites: it is both traditional and contemporary, hard edged and melodic, and vicious and amiable, and manages this without sounding jarring or disjointed”.

Out July 29th, the CD version of »Cold World+« is available for pre-order now at www.smarturl.com/piston. The jewelcase version compact disc with 12-page booklet, which includes liner notes and lyrics.

More information on the upcoming CD issue of »Cold World+« and Pist.On’s additional plans for 2022 will be revealed in the weeks to come!