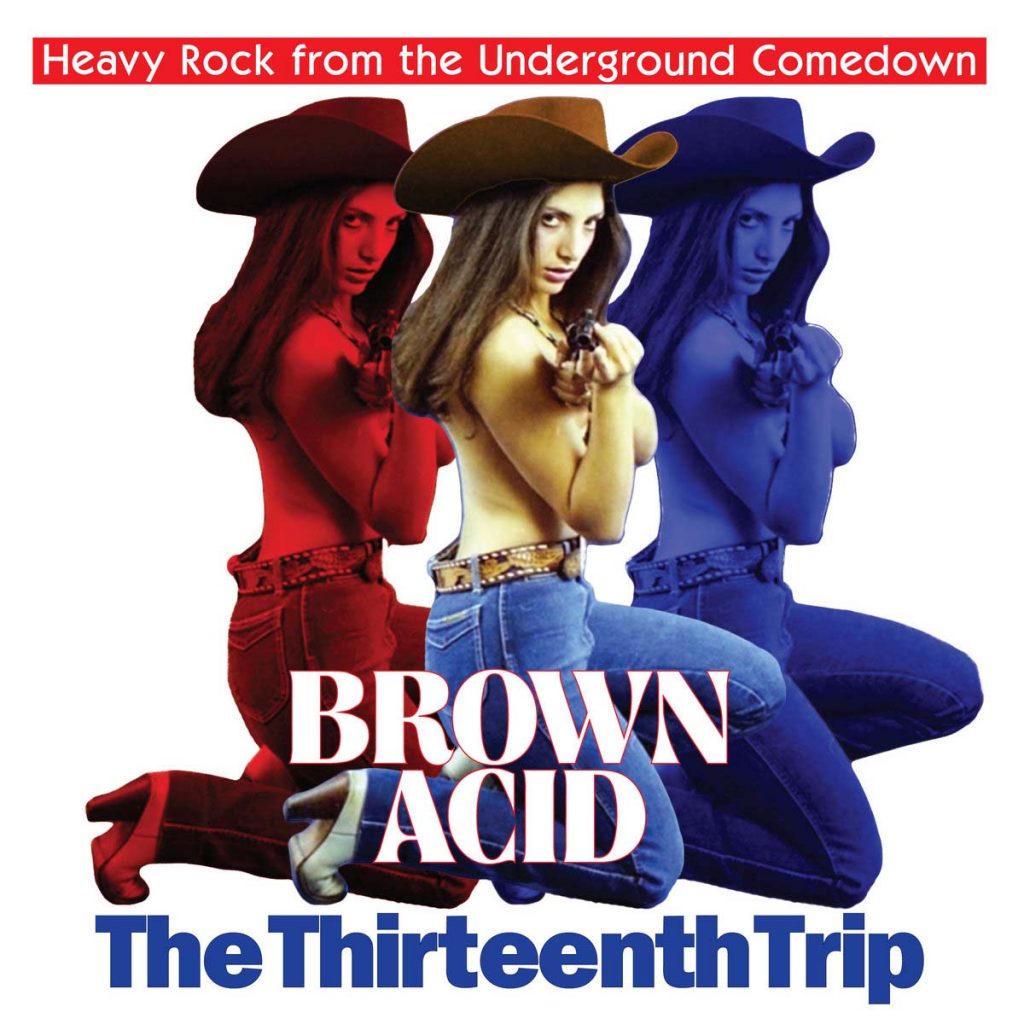 Listen to the first track »Run Run« by Montreal’s Max taken from the forthcoming »Brown Acid: The Thirteenth Trip« release.

About »The Thirteenth Trip«:

Max, from Montreal, QC – originally known as Dawn, before Tony Orlando & Dawn forced a name change – kick things off with »Run Run« from their lone 1970 single. It’s a hard-hitting rocker with scale climbing crunching guitars and powerful Bonham-esque drumming. Sadly, the band didn’t last long due to poor management and various other factors, so this is the only surviving document according to guitarist Gerry Markman. And what a document it is, paired with the A-side »The Flying Dutchman«.

You might remember Ralph Williams and the Wright Brothers from their track »Never Again« on »Brown Acid: The Tenth Trip«. Here they make their return to the series with the A-side of their 1972 Hour Glass Records 45, which sounds like Blue Cheer mangling Roy Orbison’s »Pretty Woman« (that’s right, several years before Van Halen actually did so.) Alas, Ralph and these Wright Brothers soon disappeared from terrestrial airspace.

»Feelin’ Dead« is extremely heavy blues from this also extremely rare 1974 single by Detroit, MI’s Master Danse, which was only released as a promo 45. Think Led Zeppelin’s »Since I’ve Been Loving You« and you’re on the right track. A little dose of Hendrix acid blues and a heartfelt groove, and you’ll wonder why this single never even made it to official release. The unavoidable tell in the lyric, “help me get this damn thing out of my arm” hints at the post-Vietnam heroin epidemic as a potential clue why we never heard more from Master Danse.

Folks, Gary Del Vecchio is »Buzzin’« hard on this one, and from what sounds like an in-studio party of yelps and chatter at the start of the song, it seems that the whole band was in on the festivities. The funky blues riff, reminiscent of Led Zeppelin’s »Heartbreaker« and rollicking rhythmic changes certainly keep the buzz a rollin’.The recording is technically credited as Gary Del Vecchio with Max, though not the same band as the one that kicks off this Trip.

John Kitko’s 1973 heavy psychedelic rager »Indecision« is the only recording known to exist by the mysterious artist. The Twin Record Productions release features a different artist, Tom Poff on the B-side, which is truly a shame, considering the smoldering ashes Kitko leaves of the turntable by song’s end. It starts out more like a late 60s Acid Rock jam before leaping into a blazing double-time gallop, whipped into a frenzy by wailing, neck-pickup guitar squeals and Kitko’s barely audible howls.

Tampa, FL’s Bacchus made their Brown Acid debut way back on the very first Trip with »Carry My Load«. This 1972 B-side, »Hope« is a huge sounding swinging rocker replete with roadhouse piano bolstering the chunky riffs and confident vocals. After relocating to Southern California a few years later, the band morphed into Fortress, an 80s melodic metal act whose »Hands In The Till« album of Pomp Rock on Atlantic Records still draws chatter today.

Orchid’s »Go Big Red« is perhaps the most garage-y sounding offering here, with loose rhythms and straightforward stop-and-start riffing. Nonetheless, the stomping energy and fried-amp guitar tone make this one a charming skull thwack. The band’s 1973 single on American Records, backed with a cover of Johnny Russell and Voni Morrison’s »Act Naturally« (popularized by Buck Owens and the Buckaroos) is their only release, so the world never did see this Orchid fully blossom.

By the title alone of Dry Ice’s »Don’t Munkey With The Funky Skunky« you know you’re in for a good time. The 1974 barnstormer seems aimed to the novelty tunes crowd, with its kooky lyrics and silly-voiced spoken catchphrase break, “peeyew, you’ll be sorry if you do.” But, the Ohio band’s maniacal drumming, crunching guitars and, of course, drug euphemistic lyrics make it a shoo-in for the »Brown Acid« series of erudite rock’n’roll.

Good Humore’s swaggering 1976 rocker »Detroit« is a slick and smooth paen to the Motor City. It most likely doesn’t predate »Detroit Rock City« by Kiss, also released in 1976, and it has more rock’n’roll swing, but it could fit comfortably alongside the era’s arena anthems. Not much else is known about the one-off release on P.V. Records, but songwriter Mike Moats is noted to also have been a recording engineer in later years and this well produced track sounds like a labor of love.

About the »Brown Acid« series:

Some of the best thrills of the Internet music revolution is the ability to find extremely rare music with great ease. But even with such vast archives to draw from, quite a lot of great songs have gone undiscovered for nearly half a century — particularly in genres that lacked hifalutin arty pretense. Previously, only the most extremely dedicated and passionate record collectors had the stamina and prowess to hunt down long forgotten wonders in dusty record bins — often hoarding them in private collections, or selling at ridiculous collector’s prices. Legendary compilations like »Nuggets«, »Pebbles«, ad nauseum, have exhausted the mines of early garage rock and proto-punk, keeping alive a large cross-section of underground ephemera. However, few have delved into and expertly archived the wealth of proto-metal, pre-stoner rock tracks collected on »Brown Acid«.

Lance Barresi, owner of L.A.-based Permanent Records and the Permanent Records’ Roadhouse has shown incredible persistence in tracking down a stellar collection of rare singles from the 60s and 70s for the growing compilation series. Partnered with Daniel Hall of RidingEasy Records, the two have assembled a selection of songs that’s hard to believe have remained unheard for so long.

“I essentially go through hell and high water just to find these records,” Barresi says. “Once I find a record worthy of tracking, I begin the (sometimes) extremely arduous process of contacting the band members and encouraging them to take part. Daniel and I agree that licensing all the tracks we’re using for »Brown Acid« is best for everyone involved,” rather than simply bootlegging the tracks. When all of the bands and labels haven’t existed for 30-40 years or more, tracking down the creators gives all of these tunes a real second chance at success.

“There’s a long list of songs that we’d love to include,” Barresi says. “But we just can’t track the bands down. I like the idea that »Brown Acid« is getting so much attention, so people might reach out to us.”