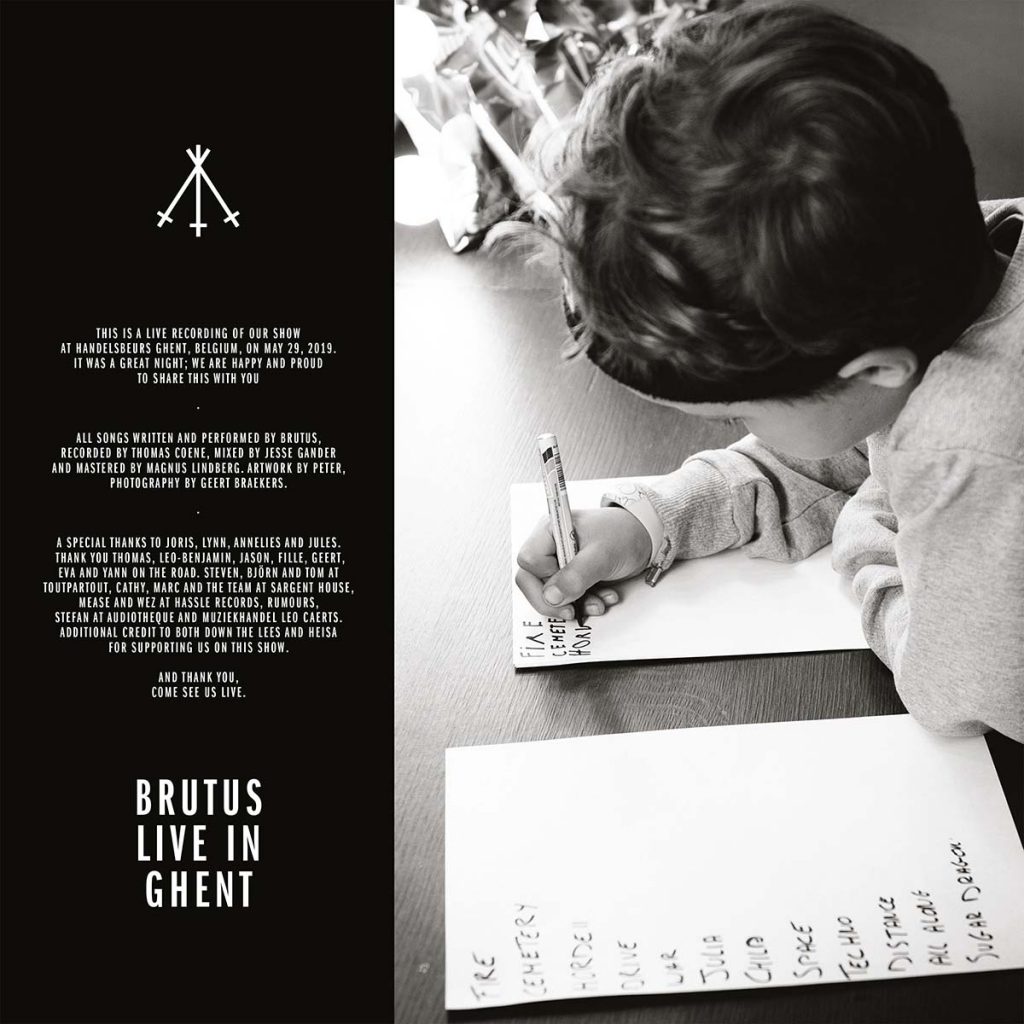 Brutus on their new release: “When the world went into lockdown, a year of live music disappeared before everyones eyes. As a remedy, we took the time to look back on what we had already done with this band and collected the footage we had of our previous shows. Painful and healing at the same time.

That’s when we stumbled upon the recordings of our show at Handelsbeurs in Ghent, May 2019. A hometown show we fully recorded and filmed after a period of touring, in front of all our family and friends. We really love that show, almost every song could be a better version than the studio album.

»Fire« and »Sugar Dragon«, opening and closing tracks of the set, are already up on YouTube, and now we also give you »Cemetery«. Stay tuned, you can expect more video of this show in the near future.

We know it’s just a recording and not even close to the real feeling we all had that night, but maybe it can give you some comfort in these hard times. We know by experience watching live shows can also be painful, but let the positive energy survive. Take care, stay safe.”

Sargent House also comments: “Live music and events have changed as we know is since early March 2020, when the world went into lockdown. We now take the time to look back on previous shows and release live music from Brutus’ last sold out show in Ghent, Belgium. »Live In Ghent« will be out everywhere October 23rd. Vinyl double LPs in standard black as well as orange are available for pre-order at Hello Merch.”

Stefanie, Stijn and Peter teamed up to start Brutus in 2013. They all met while playing in different bands from the same region of Leuven, Belgium. In merging their different ideas and musical tastes they have formed a strong union, both musically and personally.

Drummer/vocalist Stefanie mixes black-metal blast beats with math-rock flourishes whilst belting out the most impassioned vocals, shifting from deceptively melodic to out-right larynx-punishing in the blink of an eye. Guitarist Stijn Vanhoegaerden takes ethereal post-rock tones to hardcore punk levels of speed and energy aside Peter Mulders powerful sub-frequency shifts. It’s the way in which the band mixes post-rock construction, metal dynamics with hardcore energy and prog rock all the while lacing it with pure pop melodies that make Brutus’ sound so unique and all their own.

Brutus’ debut album »Burst« was released in 2017 by Hassle Records in UK and Europe, and then later by Sargent House for USA and the rest of the World. In 2017-2018 they have toured extensively all over Europe, playing many large festivals as well as direct support to Russian Circles, Thrice and Chelsea Wolfe on their European tours.

With a new studio album »Nest« released in early 2019, they are ready for more. Trouble comes in threes, so does Brutus.