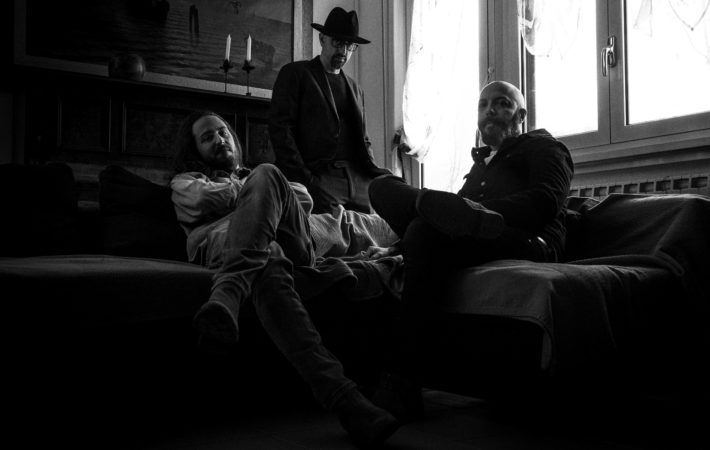 Italian heavy psych rockers Cripta Blue sign with Argonauta Records for the release of their debut album in September 2021.

Cripta Blue is an Italian power trio like many bands of the ’60/’70s, the project was conceived to create personal and original music, inspired by Budgie, Black Sabbath, Blue Cheer, Wicked Lady, May Blitz and more modern groups like Witchfinder General, Saint Vitus and Pentagram. Cripta Blue is a sort of band dedicated to heavy blues, primordial doom and jam sessions.

• Andrea Giuliani – vocals and bass, artistic producer and music journalist for italian musical magazine Classix! and CLassix Metal – continues to be the leader of the band Talismanstone, a weird psychedelic doom duo with bass andr drums, authors of a cult album, »Lovecraftopolis«, and having played like support act for important bands of the doom scene such as Electric Wizard, Sleep. Naam, Om, Alternative 4 and A Storm Of Light. They are also mentioned in the book of the Italian journalist Stefano Cerati: »Heavy Metal, 50 anni di musica dura«.

• Federico Bocchini – producer and guitarist – was for almost 10 years with the thrash metal band Rising Dark that they played with famous bands of the scene of the NWOBHM like Grim Reaper and Praying Mantis.

• Silvio Dalla Valle – drums – founded and played in Desert Wizards, a psychedelic rock band from Italy, from 2007 until 2019, with 4 vinyls gone out for the important cult label Black Widow from Genoa, Italy. They played around with The Atomic Bitchwax, Wicked Minds, The Trip and the good friends Butterd Bacon Biscuits.

Hailing from Ravenna, Italy, up & coming heavy psych rock trio Cripta Blue has inked a worlwide record deal with Argonauta Records for the release of their debut album in September 2021!

Cripta Blue were formed in 2019 by members of bands like Desert Wizard, Thrash act Rising Dark and Talismanstone. Being no strangers to the heavy music scene and following their noisy musical passion, the trio plays a revitalizing blend of psych rock, brutal heavy blues and old school sounds of the NWOBHM doom rock era between Blue Cheer, May Blitz and Saint Vitus. The baritone voice of bassist and vocalist Andrea Giuliani are shrouded by acid and fuzz rock soundscapes, full of power blues with the soul of doom.

Cripta Blue’s first and self-titled album is slated for a release in September through Argonauta Records, and one can only sense, this debut may be a strong contender for several Best-Of 2021 lists. Watch out for many more updates and first album singles to follow in the weeks ahead!