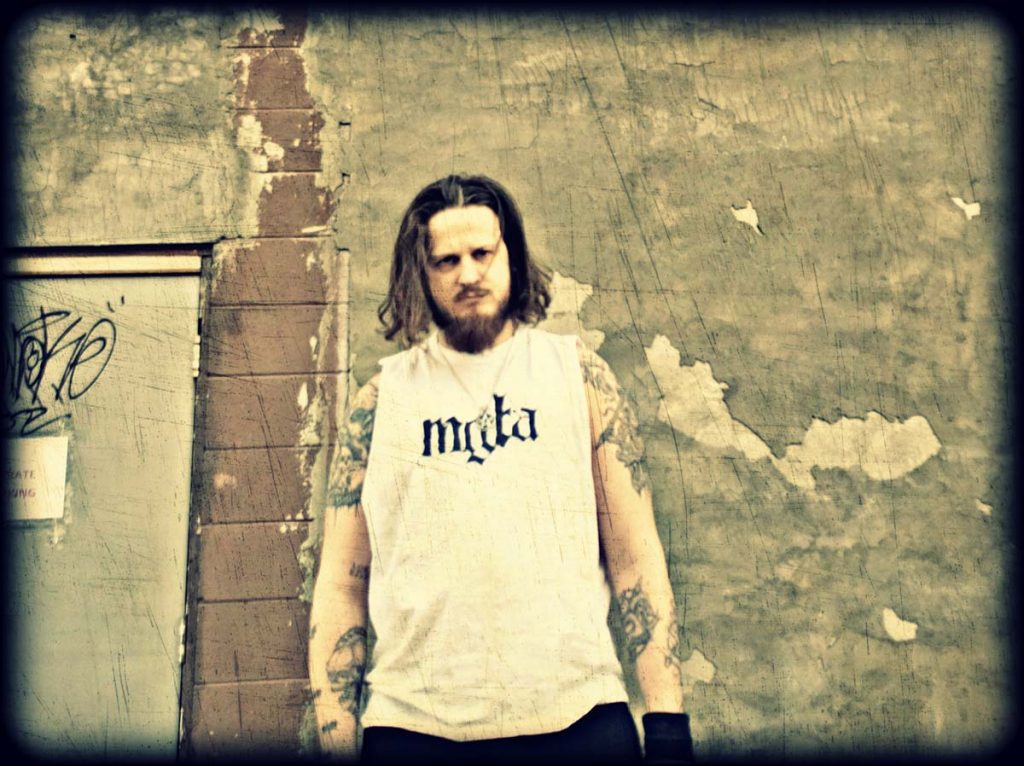 Flooding forth with misery and hate comes the first album from Discarded Self, the Canadian solo project from Jarret “Fuzzgod” Beach, who’s also a member of the bands Destroy My Brains and Ashes Of Yggdrasil. Created during a time of personal isolation, the album »Discarded Self« ranges from tales of the macabre to introspective trips into self-loathing and personal degradation that dredge up terrible memories of the past to drown in personal regret. There is no hope for the future here.

»I Smell Pipes«
“The opening track of the album is actually written about a close friend I used to have when I was younger. It is describing a short chapter of his life, which in turn was the end of his life. He was a good friend but became a fiending drug addict »I Smell Pipes« was actually a quote he used to say when he would arrive at a party, and it signaled for all of the other crackhead/jib users to go into a room a light up rock and crystal all night. What started off as what he called fun recreational drug use, turned into full on lying, cheating, stealing, robbing, rock bottom living on the streets drug use. He passed away with a needle in his arm banging speedballs. I wrote the song with more fun style riffs, because that was the last thing I remember about him before he disappeared and wound up succumbing to his chemical addictions. He used to be a fun guy. Hard drugs are no joke, there are only two ways it will go for you, if you want to live that kind of life. The lucky ones go to jail and sober up. The unlucky ones die, or live a long time as a worthless drug fiend. If you are having trouble with addictions talk to someone and seek help. The alternative is more than most likely going to be a coffin. I wrote this song with a heavy heart, and it was really hard to record the lyrics.”

»Orbitoclast«
“The song »Orbitoclast« is a collection of riffs and vocal ideas I actually started this project with. It starts off slow, but gets straight down to it with a thrashy section that has shredding vocals bleeding all over it. For those that aren’t aware, an Orbitoclast is the instrument that is hammered into a person’s brain, when they were the poor individual who received a lobotomy in the late 40’s early 50’s. The song is of course about the horrifying practice of lobotomy, but has an extra hidden meaning. It’s a metaphor for giving your trust to someone who doesn’t have your best interests in mind, and only their own personal interest, with no concern of who they damage along the way.”

»Push The Knife«
“»Push The Knife« is a slow moving look into the mind of someone who is sick with depression and touches on the topics of suicide/blood sacrifice. How it feels like you don’t want to exist in society, and you want to disappear and be forgotten. The song was originally titled »Staple«, and is essentially about barely holding your life together like a “bent staple with one arm” as the lyrics suggest. The song takes a horrible turn as the protagonist of the story performs a blood sacrifice of themselves in an attempt to become a demon, and seek revenge upon the whole world who has wronged them throughout their life. This song features Ashes Of Yggdrasil’s lead guitarist Brett on the drums, and backup vocals as well.” 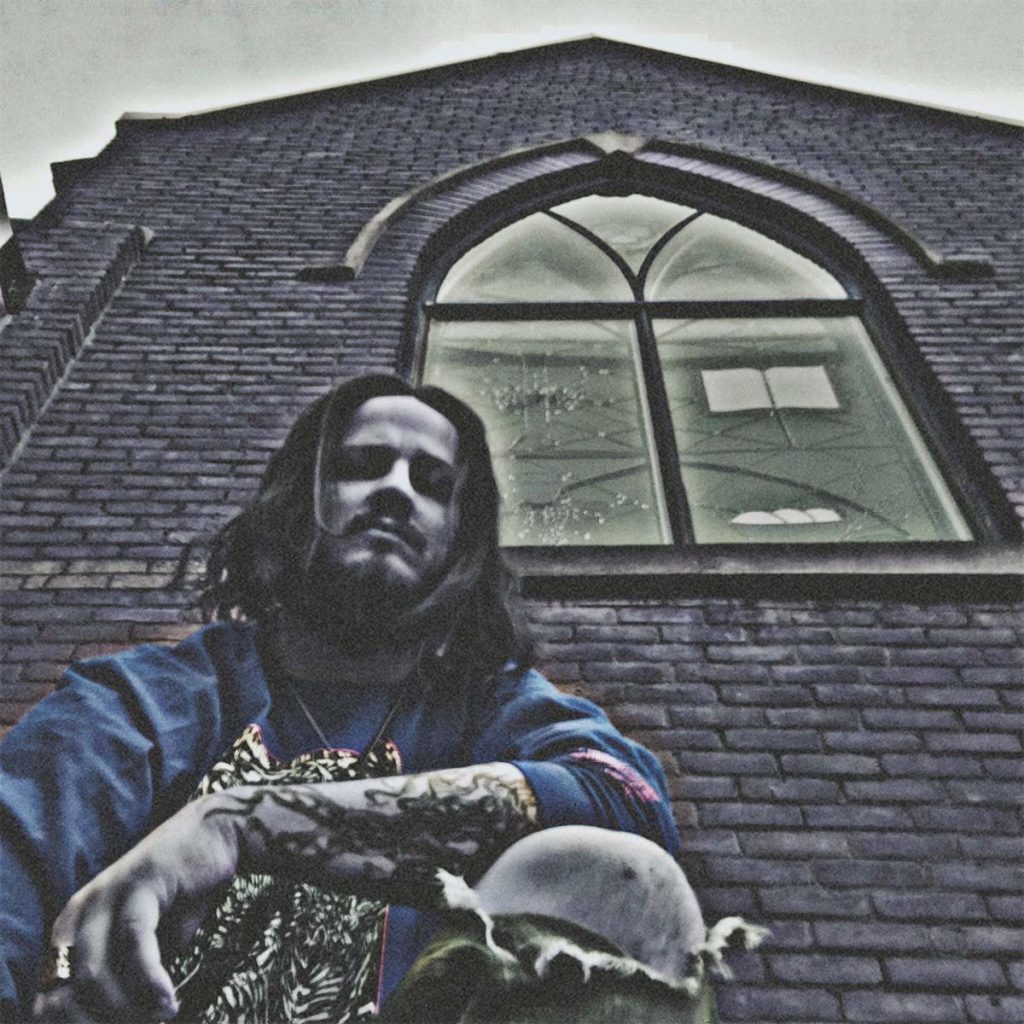 »On The Unlevel«
“This song is my hate fueled message to the government. I wrote this whole album in 2020, and being the naturally rebellious person that I am, the government control, restrictions, and lockdowns are not anything I ever pictured happening in my life and the damage they have caused to our society is mindblowing. If you feel the same as me, I strongly suggest looking up the lyrics to this song to understand the anger seething from within me when I was writing this. »On The Unlevel« is an attack against oppression, control, racism, division, and lies. Things can’t continue like this, and everyone needs to work together to repair all of the damage, and seriously think about the crucial changes that need to be made in our world if we are ever going to see it the same way it was, or better than it was. This is a true rebellion song.”

»I’m Weak«
“»I’m Weak« is an ode to all those who are born into this world as a person with crippling disabilities, mental health problems, or sub-par lesser functioning beings, that are unable to accomplish anything in life, and the feelings that are often associated with that, which are often followed by self doubt, self loathing, low personal esteem, drug abuse and suicide. »I’m Weak« is a tribute to a close friend who lived with all of the above named issues, and is no longer a part of this plane of existence. They will remain unnamed. This song embodies what the band name Discarded Self is all about.”

»Cultist Of The Pentagram«
“The track »Cultist Of The Pentagram« is about those who follow the rebel and master Satan, and their efforts to complete Satan’s work, in destroying God and his followers. This song is a complete assault on the world’s organized religions, and their slaughters and atrocities committed against their fellow men, women and children of earth, in the name of their so called God. The true liar and evil presence that plagues our realm we exist in.” 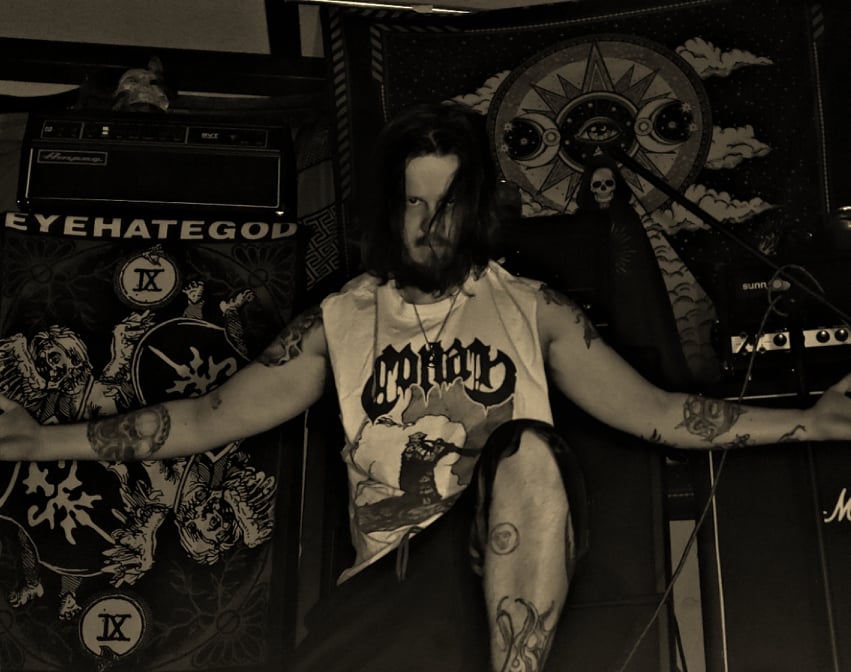 »Abused (e)Motionless«
This song was another personal and painful song to write. It is about the many forms of abuse from a loved or trusted person. The damage and trauma caused is generally irreversible, unforgettable, and leads to all sorts of problems throughout the person who was abused’s life. It is a deep look into the person’s mind, and how fucked up they can become from it. If you or someone you know is being abused, be brave and get out of that situation. Reach out, someone will be there to help.

»Dance Upon The Dead«
“I’ve been watching a lot of serial killer movies for I don’t know, the last 25 years haha. I used those types of films for the inspiration of this song. This song was written coming from the perspective of a husband or father of a victim of a serial killer. It is clearly a revenge song, and describes the hate and rage that would be felt by the families of the victims. It’s a disgusting dive into that reality, and ends in a way that quenches the thirst of pure revenge.”

Bonus track, »Upside Down« (Fistula cover)
“I wanted to pay tribute to a band I love and admire, so I recorded a cover of Fistula’s song »Upside Down«. Almost every single time I’m hanging with friends I always make them listen to Fistula. Almost everyone I know now knows about them, so that’s really awesome. That also must mean I drink a lot! Haha! The original song »Upside Down« is a real simple one, so I wanted to really spice it up and added a few things, yet kept it the same, and my drummer Jadan, who is also a big Fistula fan, does a two and half minute drum solo at the end of the track. If you are reading this, and you haven’t heard of Fistula. Do yourself a favour and just turn my Discarded Self album off and check them out. You are going to get simply destroyed!”