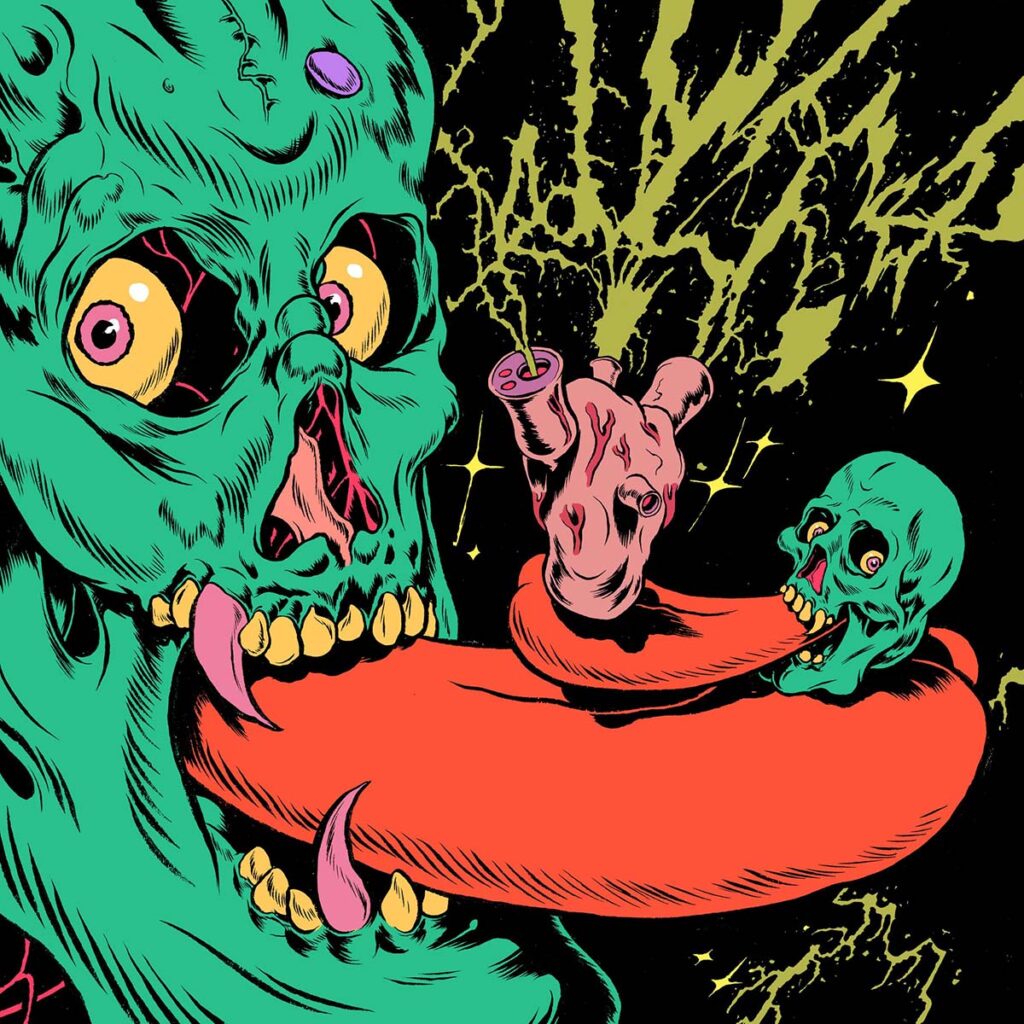 Greek noise rockers Krause have announced their new album, »The Art Of Fatigue«, which will be released on May 20th, 2022 via Venerate Industries.

Watch a music video for the lead single »The Stuff Of Tired Eyes«!

Tracklisting:
01. Ignorant Acts Of Crippled Vision
02. Crowdfunded Assassination
03. Sloppy Human Excess
04. The Stuff Of Tired Eyes
05. Talentless But Connected
06. Steeped In Disaster
07. Bootstrap Reactionaries And Alienated Intelligentsia
08. Ceremonial Aspects Of Everyday Bloodbaths
09. Stressworld
10. Hot Bods And Prohibition
11. The Things I Love Affront Me with The Effort It Takes To Love Them

Greek noise rockers, Krause, have announced their third full-length, »The Art Of Fatigue«, which is set for release via Venerate Industries on 20th May. The album represents another switch in the band’s sound, delivering a scattered and relentless listen which showcases their undeniable presence and sonic expression.

Ahead of the album release the band have delivered a trippy, animated music video for first single, the savage »The Stuff Of Tired Eyes«.

Premiered via Metal Injection you can now watch the full video on YouTube!
Stream the single: smarturl.it/icexbz
Pre-order »The Art Of Fatigue« here: venerateindustries.store/krause

Comments the band on the new single: “Far from being representative of the new record, »The Stuff Of Tired Eyes« is more of an outlier. The only instance of clean singing on the record but still pretty damn brutal, and we love the dynamics on it.”

Heavy-as-all-hell Athens, Greece noise rock quartet Krause emerged in 2016, exploding onto an unsuspecting scene with the release of their debut LP »2am Thoughts« (Riot Season, 2017). Following in 2019 came the the equally well received »The Ecstasy OF Infinite Sterility«, a brutal, sparsely melodic monolith of an album. In 2020 the band released »The Vague Outlines Of Almost Recognisable Shapes / The Fraternity Of Lost Men-Children« 7-inch, which served as a harbinger of things to come. Two monumental slabs of uncompromising sonic violence gave an inkling of where Krause’s future sound was heading. 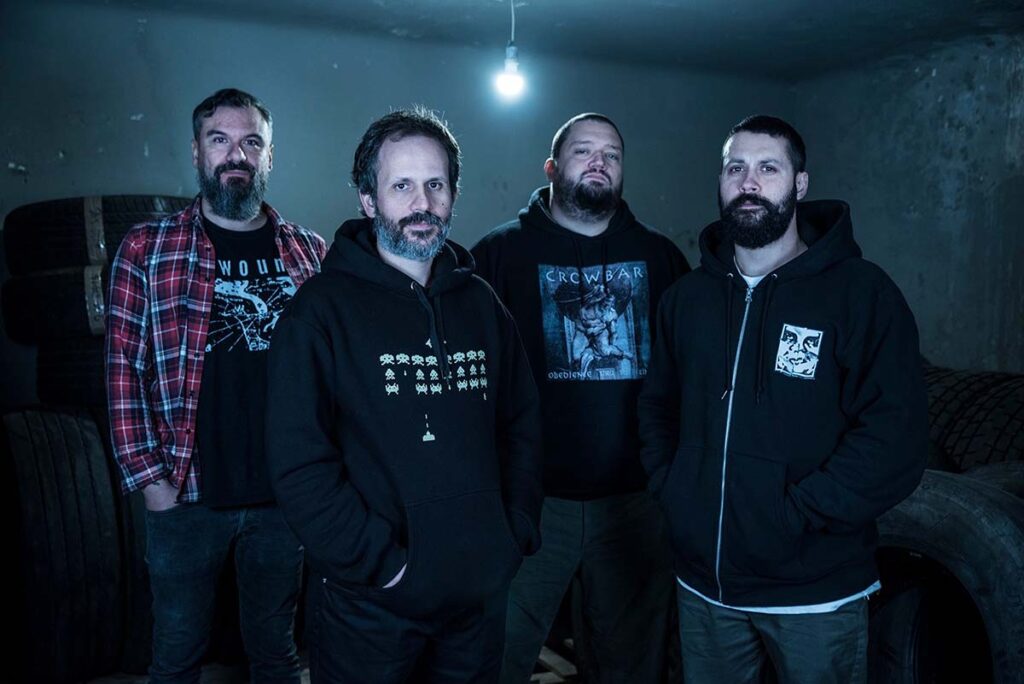 Featuring veterans of various scenes and genres (active and past members of VULNUS, Cut Off, Rita Mosss, Casual Nun, Progress Of Inhumanity, Dusteroid and Straighthate), Krause play AmRep/Touch and Go inspired heavy noise rock and put on an equally unforgiving live show to go with it.

Now, with their brand new full-length »The Art Of Fatigue« set for release in May, Krause are ready to lay down the next chapter in their noise-riddled, twisted, devastating course and meticulously take apart every single one of your expectations. The savage full-length may be the band’s archetypal statement of intensity and despair made sonic.

On the upcoming album, the band comment: “The tracks are essentially about urban decay and our disgust with politics, society and human life amidst the pandemic and the ongoing crisis. We are all rather misanthropic and pessimistic as people, so our lyrics tend to either be stories of urban isolation or reflect our disappointment with our own selves and humanity under capitalism. Our opinions were confirmed by the financial crisis and the resultant global situation, so I don’t see our themes changing any time soon.” 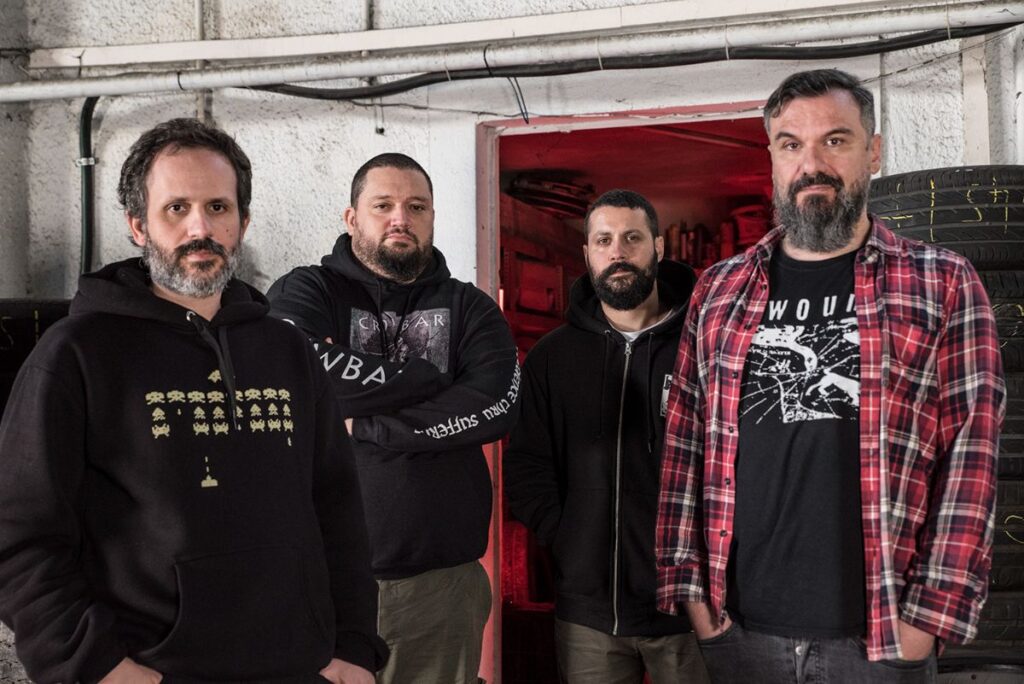 “When we started Krause, all we wanted was to create an atmosphere and tone more than follow a style or genre. In our case, this harks back to the Amphetamine Reptile or Touch and Go bands which were characterised more by an attitude than a cohesive style or sound. As a result, the reference points that we do share (Unsane, Cherubs, Breach, Entombed, Cursed, Hammerhead, Killdozer, Helmet, Shellac, Today Is The Day, Melvins, Whores, Gnod, Part Chimp etc.) have more to do with a certain attitude and approach to music rather than the act of songwriting itself.”

»The Art Of Fatigue« will be released on 20th May via Venerate Industries. Pre-orders for the album can be found here, and the full tracklist plus artwork can be viewed now.