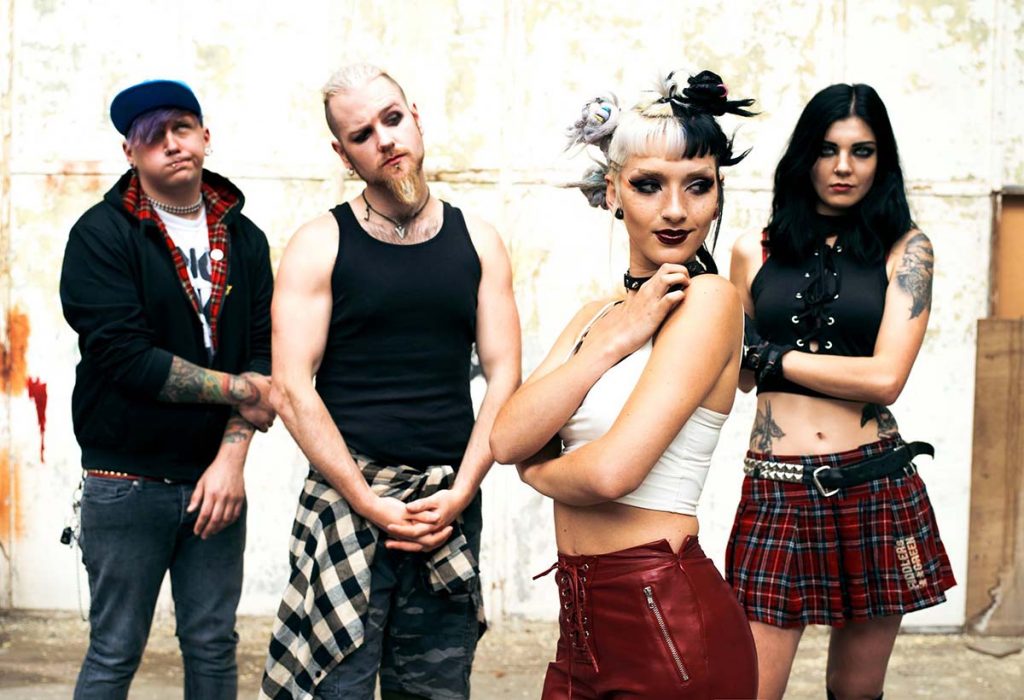 Hands Off Gretel are a sassy alternative rock/grunge band from South Yorkshire, who have built themselves a solid live reputation, for high energy shows that are musically dynamic and visually compelling.

Hands Off Gretel have created the perfect soundtrack of sugar-coated grunge-punk to vent and rail against the issues of body image, mental health, celebrity, childhood and loneliness all of which were addressed from a fiercely female, unapologetic, feminist perspective.

Over the last few years they have gigged relentlessly and swelled their UK and international fan base, resulting in a largely sold out UK album tour, busy European dates and appearances at major festivals including, Isle of Wight, Camden Rocks Festival, Y Not and Kendal Calling. They have also played the BBC Introducing stages at Tramlines and Humber Street Sesh.

The band have received critical acclaim on their self-released album »I Want The World« (2019). With Classic Rock putting this at No.15 in the Top 50 rock albums of 2019 ‘so far’ and Kerrang! Magazine giving it a solid 4/5 Ks.

The band have been tipped my many industry taste makers as ‘Ones to Watch’, including Alternative Press, PRS Foundation (Emerging Artist Winners) and ‘This Feeling’ who tipped them for their #Bigin2019, including a showcase on ‘This Feeling TV’, supporting Miles Kane. They have been added Spotify’s Hot New Bands Playlist and the band have had great coverage in Kerrang Magazine, Vive Le Rock, Classic Rock Magazine and many more.

The band has received regular airplay from their local BBC Introducing team in Sheffield and airplay on 6Music with Steve Lamacq and Tom Robinson. Tracks from the bands album »I Want The World« have also been play-listed with Planet Rock and Kerrang Radio, with »Its My Fault« being selected by Sophie K as track of the week on Kerrang Radio and Kerrnag’s Spotify playlist.

The band has a strong DIY ethic, with all of the bands visuals, videos; merchandise designs being created by front woman Lauren Tate. Three of these self-produced videos have gone on to secure Video of The Week with Louder Sound.

For fans of Hole, Babes In Toyland, L7, The Distillers, Lunachicks, The Gits, 7 Year Bitch