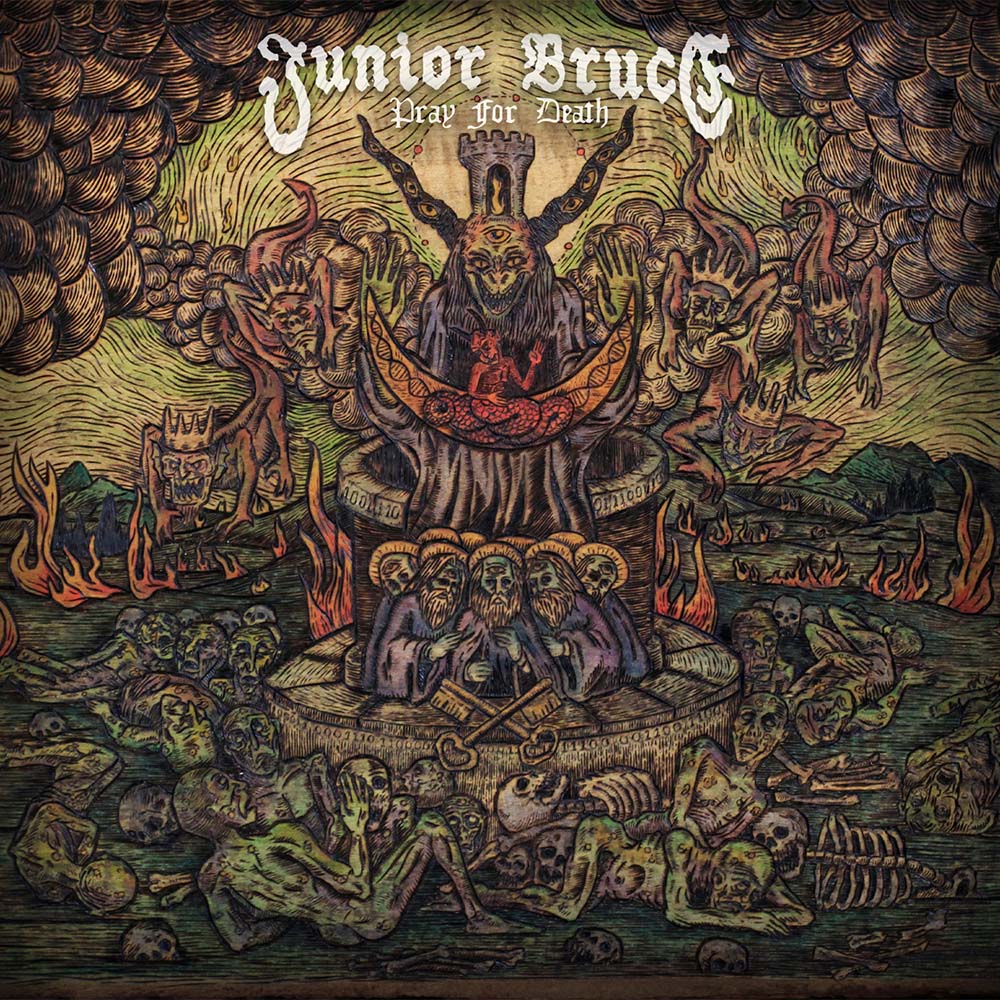 Dredged from the swamps of DeLand, Florida, long-running stoner metal/sludge outfit Junior Bruce is about to unleash their third studio recording via Sludgelord Records. The »Pray For Death« LP will be released on cassette and digital formats.

Vocalist Scott Angelacos, bassist Tom Crowther, guitarist Nate Jones and drummer Brett Tanner established the band in 2007, signing to A389 Records in 2010; that same year, Angelacos founded High Five Studios with friend Jeff McAlear. Bryan Raymond joined Junior Bruce on guitar in 2011 and the band released their debut album »The Headless King« with A389 in 2012.

Unfortunately, the band went through some tragic transitions over the next several years. Brett Tanner passed away in 2012, and Bryan Raymond survived a debilitating motorcycle accident in 2015. Jeff McAlear stepped into Tanner’s role, while Chris Hayden replaced Raymond as the second guitarist; the band put out two releases with A389 during this time, »The Ocean’s Daughter« EP in 2014 and full-length album »Endless Descent« in 2016.

Junior Bruce began a new chapter of writing and recording in 2018 with guitarist Brett Walker, who joined the band after Nate Jones’s departure. Drawing influence from Black Sabbath to Motörhead, Pink Floyd and Bad Brains, the band delivers freight train riffage that has just the right mix of menace and groove. Over the years, they’ve supported the likes of Pentagram, EyeHateGod, Integrity, Big Business, Yob, Monolord, Weedeater and more, as well as appearing at Maryland Deathfest, A389 Bash, Mutants Of The Monsters Festival, Anti-Pop Festival, and Florida Is Loud Festival. Called “bullish and blistering” by Louder Sound and “striking” by Glacially Musical, this was a band on the precipice of great things.

And just as Junior Bruce was ready to kick into high gear, the coronavirus pandemic put the music industry – and everything else in the world – on hold. They were able to finish recording the LP »Pray For Death«, with McAlear handling production duties at High Five Studios and Sanford Parker at Hypercude in Chicago, Illinois contributing his mixing and mastering expertise.

»Pray For Death« is the work of five musicians who have honed their creative and collaborative processes over more than a decade, overcoming many challenges along the way. Soaked in swamp muck and drenched in fuzz, Junior Bruce is a force to be reckoned with.