Danish psychedelic heavy metal/stoner rock band Kadavermarch has just released their debut album »Into Oblivion« this Friday, May 6th, 2022 via Last Mile Records. »Into Oblivion« is available now on all digital streaming platforms!

Says the band: “Debut album »Into Oblivion« is out everywhere! And with a video for the song »Abyss«. Check it out!”

A sweet rotten smell of decay fills the air across the abandoned graveyard. The only thing that breaks the silence is the creaking sound of cracks coming from the the dry naked ground. Everywhere white crooked hands appear from the ground. Like withered flowers they move in the windless night. The corpses are yet again on the move!

The Kadavermarch has begun… Five people, all with roots in the Danish underground scene, are now together on stage. The beat is heavy. Guitars, drums, bas and organ fills the soundscape. The only thing that penetrates the wall of sound are the two lead vocals. From the graveyard to the outskirts of the galaxy, Kadavermarch rises with eternal echo, reverberation and pounding guitars to the empty void beyond. 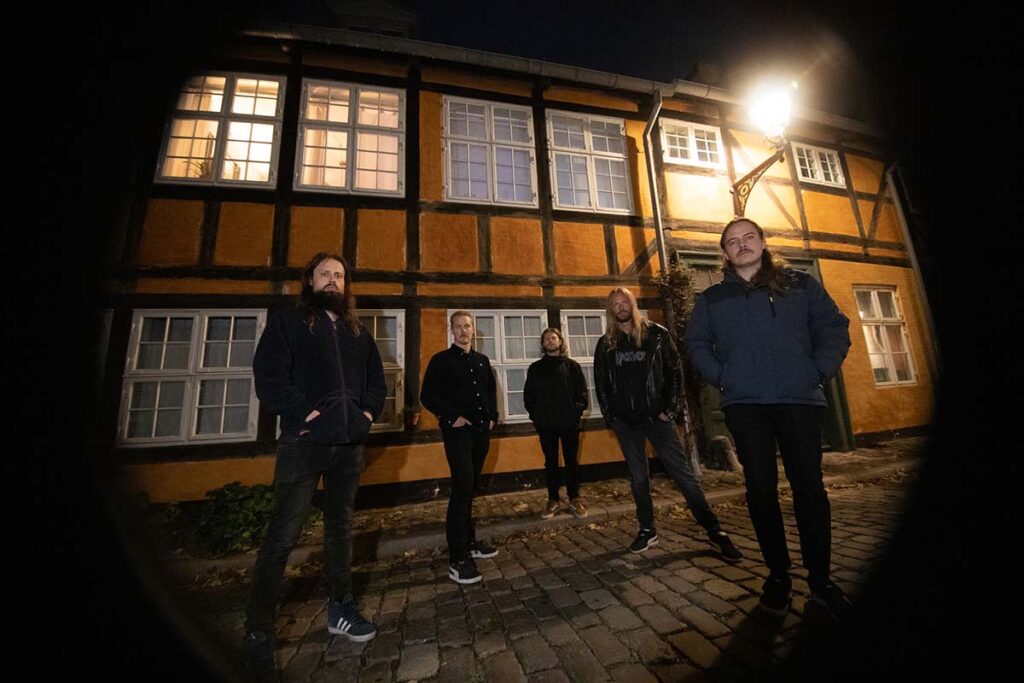 With roots well deep in the Danish underground scene in bands such as Illdisposed, Crocell, Czar, Helhorse, Tudsegammelt or Total Heels – Kadavermarch met up for the first time in the summer of 2019 to wallow in their desire to play stoner, desert rock and heavy metal.

Brought together by a mysterious mutual friend, who had a fuzzy vision for a band – that he shortly thereafter abandoned. Since then, the remaining five members have developed their sound to just the right blend of the different howling noises to satisfy their riff-needy souls – and their lost friend, who could not finish what he set out to do.

“Out there! They’re coming back to life! They’re everywhere!”

After releasing their debut single »1000 Yard Stare« in November 2021, Copenhagen based five-piece Kadavermarch is ready to unleash their first full-length album »Into Oblivion«. It is straight ahead in-your-face riff worship, with tons of layered heavy guitars, a screaming organ, and of course delay upon delay! The only thing that penetrates the wall of sound are the sharp enticing twin vocals.

Through 9 tracks Kadavermarch takes you all the way from the graveyard to the galaxy and beyond. The songs are a mix of pounding beats with high energy and everything turned up to 11, and on the other hand slow meditative tunes that transcends the listener to another universe, only to drag you right down in the mud again on the next track.

The album »Into Oblivion« was recorded in Copenhagen and mixed by Jacob Bredahl in Dead Rat Studio, Århus.