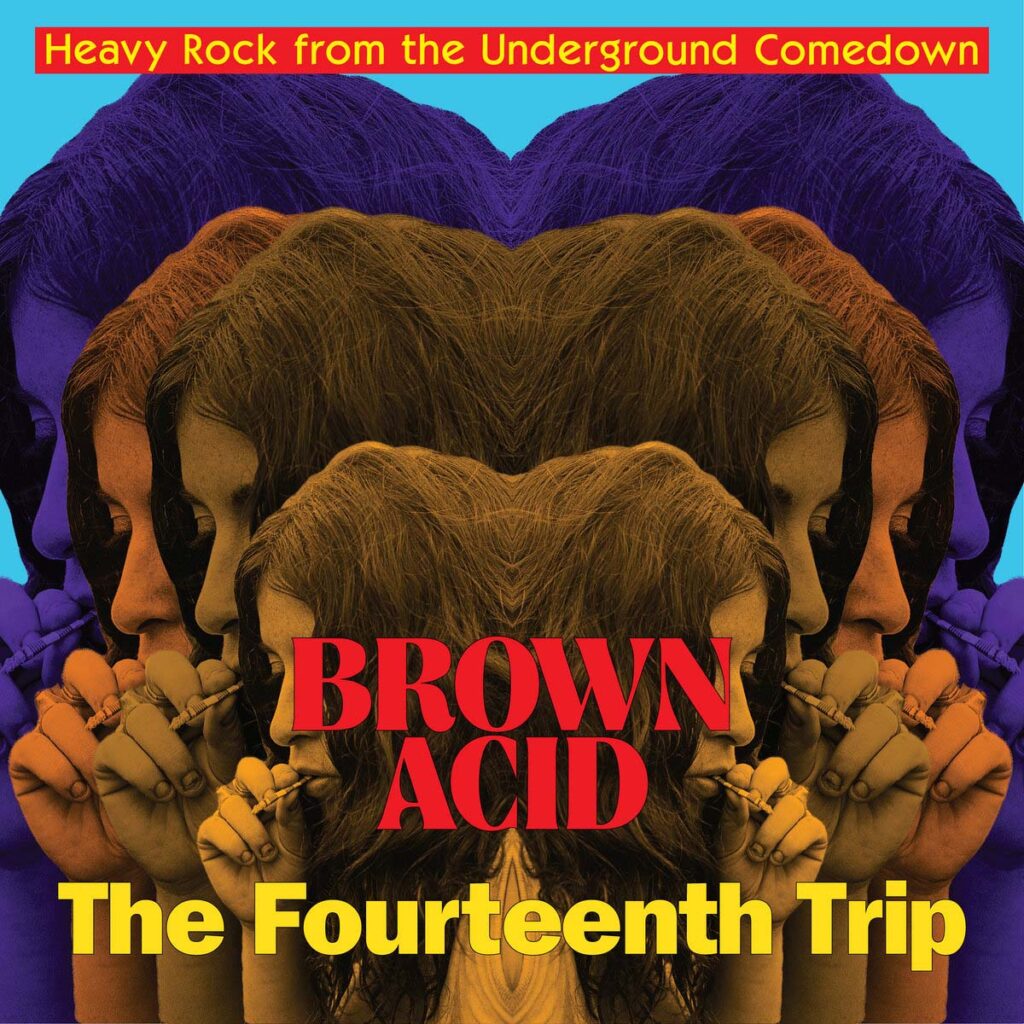 “So rare that diehard fuzz junkies say you’d have a better chance of winning the lottery than finding a physical 45 rpm single by one of the bands featured on their latest installment.” — Dangerous Minds

“Will do for hard rock, proto-metal and heavy psych what Nuggets did for garage rock, and bring it to a wider audience of collectors and music fans.” — The Guardian

“Mining the surprising rich reserves of heavy rock and proto-metal from the ’60s and ’70s, these collections have been crucial to understanding the history of a subgenre of rock that had far deeper roots than most fans realize.” — Paste Magazine

About »The Fourteenth Trip«:

The Legends’ »Fever Games« is a 1969 fever dream of heavy psych on par with Blue Cheer at their heaviest, featuring an incredible intro with whammy-bar gymnastics through an Echoplex. This Harrisburg, PA power trio, featuring Dan Hartman (Edgar Winter Group, et al) and his brother Dave, also name-checks Jimi Hendrix Experience in the midst of the song’s most blatant Hendrix rip. Perhaps that’s how Fever Games work? Whatever the case may be, this stunning rocker is the B-side to »High Towers«, the band’s second single out of four released over 5 years.

Next up, another banging track driven by wild sound effects. In this case, Mijal & White serve up some Moog run rampant on their lone 45 from 1973, »I’ve Been You«. Runaway oscillators and modular synths spurt and sputter over some Tommy James & The Shondells bubblegum garage psych. The duo was a Detroit recording engineer (Mike Mijal) and a local musician (Mike White) tinkering with new technology with magical results. Could this heavy lysergic pop gem have inspired Meco’s »Star Wars Galactic Funk« just a handful of years later?

Liquid Blue bring us back to the era’s strong meat ’n’ potatoes blues-rock with this 1969 Texas rocker »Henry Can’t Drive«. Sure, Henry can’t, but this blazing track sure can drive. This 1969 single on the Texas Revolution label is the band’s only release, with this A-side being penned by brothers Hal and Ted Hawley, also of Lone Star State psychedelic rock unknowns Glory. The dueling guitar solos and the way the band erratically shifts gears makes this one as valuable as liquid gold.

Hailing from Olivet, Michigan, the San Franciso Trolley Co.’s name may be misleading, but their ripping rager »Signs« has all the answers you seek. Their extremely rare 1970 A-side, backed with »Rainbow Heaven« is a blitzkrieg workout of frantic drums and a wailing guitar lead that spits fire and brimstone. Not exactly the Flower Power love-in one might expect given the name, but thankfully these youngsters sound like a hard rocking 13th Floor Elevators meets the MC5.

Blue Creed was never a real band. That is, the West Virginia group never performed publicly. The band was the brainchild of coal miner & songwriter Bill Rexroad who paid all of the pickup musicians and financed all of the recordings himself. »Need a Friend« indeed. Rexroad sought an original sound by putting guitar speakers in oil drums (an illustration of which became the logo of his label Mo/Go Records) and perhaps never having showed off that kind of showmanship on stage doomed Blue Creed to obscurity.

Transfer’s velvet smooth groove has an almost proto-punk feel like a mashup of the Velvet Underground and The Flamin’ Groovies. But the lyrics referencing tokin’ reefer and the twanging surf lead situate them closer to their heavy rock brethren. This very rare 1974 self-released 45 is this lone archive of the band’s existence, who, we assume just kept right on playin’ it cool into oblivion.

The cowbell lead-in announces that you’re in for a good time before Appletree’s »You’re Not The Only Girl (I’m Out To Get)« even begins. And when it all kicks in, this Grand Funk adjacent headbanger features silky guitar leads, sweet high vocal harmonies and stomping drums to drive the point home. Apppletree was led by songwriter Gary Apple, who also penned the single’s curiously titled A-side »The Ballad of Pencil«. The date of the band’s sole release is believed to be 1971, but where Appletree took root remains unknown.

Cox’s Army deploy the grungy rocker »I’m Tired« which sounds like if Jimi Hendrix fronted Mudhoney. Yes, please! Though they hailed from Aurora, IL, it sounds like there’s definitely some Pacific Northwest in their blood. Particularly in the gritty production, which hints at The Sonics’ “bustin’ outta lo-fi” style, and the bluesy shuffle rhythm that’s thwacked out on what sounds like a cardboard box. »I’m Tired« b/w »She’s A Fool« is their only known release.

Not much is known about the enigmatic Columbus, OH musician known as Raven, whose »Back To Ohio Blues« closes this edition. Upon completing his damaged-biker Back to Ohio Blues 5-song album in 1975, he gave away most of the few hundred copies that were pressed and vanished from public eye. The mantra-like droning riff of this 8-minute jam is a »Black To Comm« style epic, driven by Raven’s hostile, no-bullshit diatribe until it all busts open for an insane 2-minute long drum solo soaked in odd effects that sounds like it was copped from a Melvins album. It ends with a droning acoustic guitar coda, in which Raven repeatedly wails, yells and yelps, “lets go make some more love.” It’s easy to understand why this album has been a cult bootleg favorite until its 2021 reissue on our own Permanent Records.

About the »Brown Acid« series:

Some of the best thrills of the Internet music revolution is the ability to find extremely rare music with great ease. But even with such vast archives to draw from, quite a lot of great songs have gone undiscovered for nearly half a century – particularly in genres that lacked hifalutin arty pretense. Previously, only the most extremely dedicated and passionate record collectors had the stamina and prowess to hunt down long forgotten wonders in dusty record bins – often hoarding them in private collections, or selling at ridiculous collector’s prices. Legendary compilations like Nuggets, Pebbles, ad nauseum, have exhausted the mines of early garage rock and proto-punk, keeping alive a large cross-section of underground ephemera. However, few have delved into and expertly archived the wealth of proto-metal, pre-stoner rock tracks collected on »Brown Acid«.

Lance Barresi, owner of L.A.-based Permanent Records and the Permanent Records Roadhouse has shown incredible persistence in tracking down a stellar collection of rare singles from the 60s and 70s for the growing compilation series. Partnered with Daniel Hall of RidingEasy Records, the two have assembled a selection of songs that’s hard to believe have remained unheard for so long.

“I essentially go through hell and high water just to find these records,” Barresi says. “Once I find a record worthy of tracking, I begin the (sometimes) extremely arduous process of contacting the band members and encouraging them to take part. Daniel and I agree that licensing all the tracks we’re using for »Brown Acid« is best for everyone involved,” rather than simply bootlegging the tracks. When all of the bands and labels haven’t existed for 30-40 years or more, tracking down the creators gives all of these tunes a real second chance at success.

“There’s a long list of songs that we’d love to include,” Barresi says. “But we just can’t track the bands down. I like the idea that »Brown Acid« is getting so much attention, so people might reach out to us.”