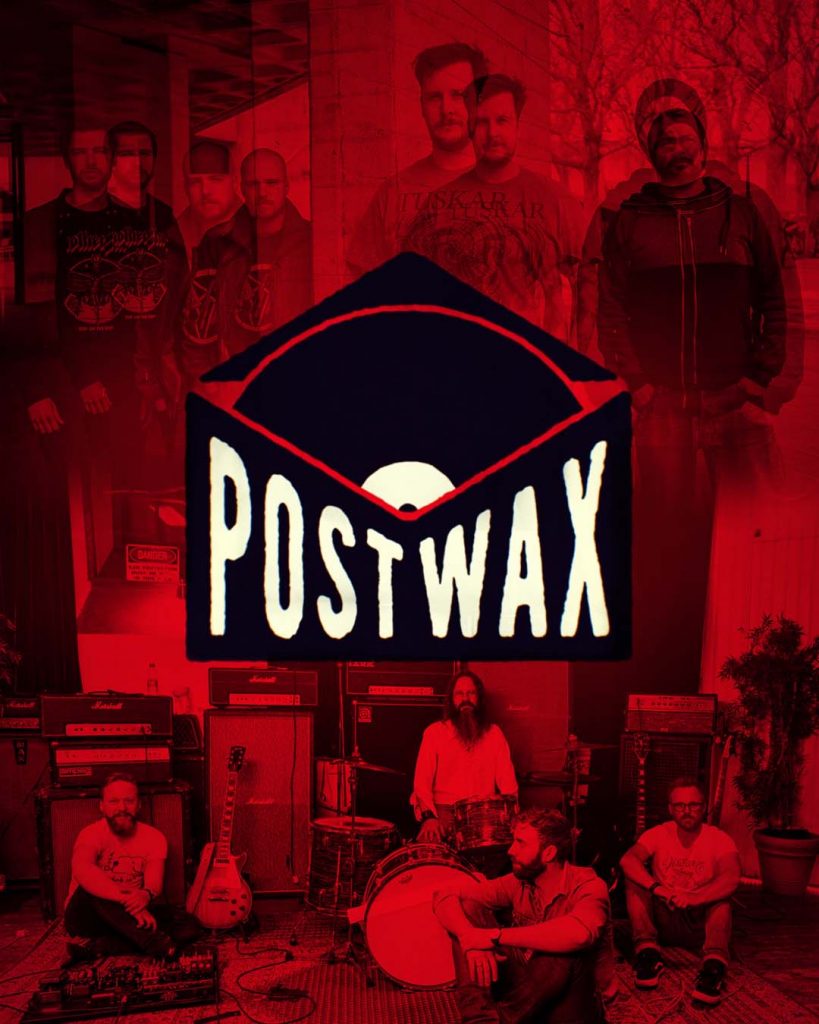 »PostWax Vol. II« will be released via Blues Funeral Recordings, with more details to be unveiled soon.

Heavy rock icons Elephant Tree, whose 2020 album »Habits« is a decimating blend of organic fuzz-fueled bliss and transcendent vocal hookery, and Lowrider, whose unassailable »Refractions« LP blasted across 2020’s heavy music landscape like an extinction-level desert storm and swept top honors for the year throughout the scene, are joining forces for a titanic special release on PostWax.

The joining of REZN’s gargantuan heaviness and lysergic dreamscapes with Vinnum Sabbathi’s hypnotic and jammy superscience soundtracks is the exact type of aural mind-meld that PostWax was conceived to present. These two avant-garde outfits will deliver one massive and ground-breaking effort, one that has chance to make an impression among heavy music lovers and beyond.

Bay Area legends Acid King are joining forces with Jason Landrian (Black Cobra) and Bryce Shelton (Nik Turner’s Hawkwind, Bädr Vogu, High Tone Son Of A Bitch) for a mind-altering soundtrack-inspired sonic journey created exclusively for this project. »PostWax Vol. II« will also mark the blistering return of Britain’s the fuzz-fueled power trio Josiah, who are making the most of the Blues Funeral collaboration to present their first studio album in over a decade, the followup to their 2009 Eletrohasch release »Procession«. Fans of heavy-psych meets straight ahead riff-rock should take notice!

Each band will produce a trio of new tracks for this unparalleled split record, topped off by a seventh collaborative tune forged exclusively for PostWax – which will only be available to the series subscribers. This mind-boggling union will give rise to a special split record, with details to be unveiled soon. 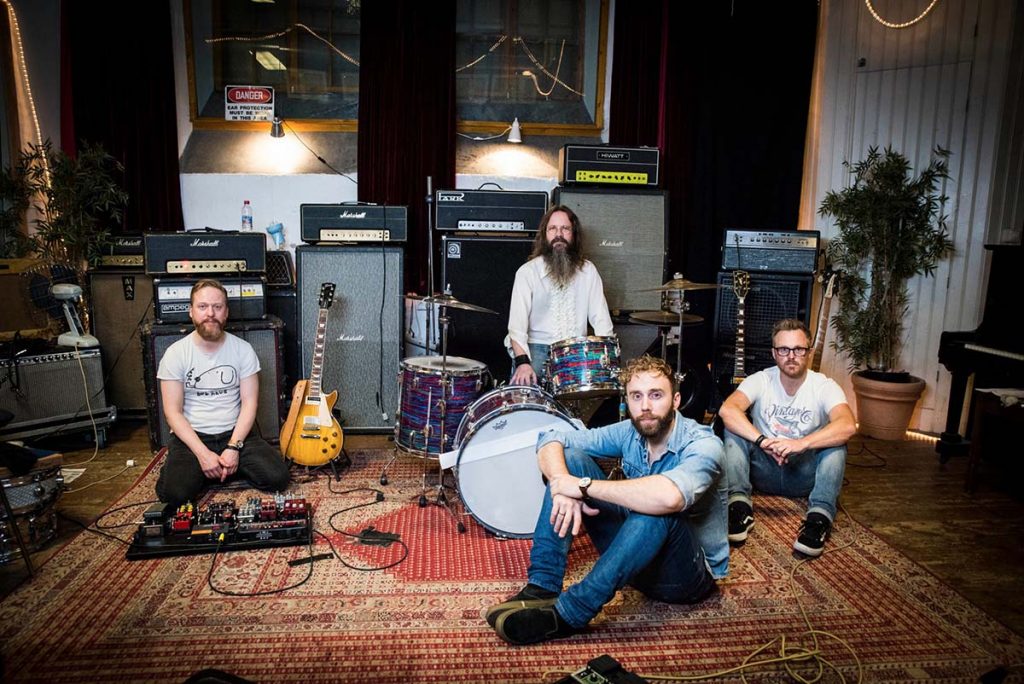 Elephant Tree’s Jack Townley gushes: “When we were flanked by Jadd and Peder about serving up a juicy slab of riffage, we were delighted! We’d been massive fans of Lowrider’s chops since we started out as a band, so didn’t skirt around or mince words when we replied ‘yes!’ with gravy on top! We came up with the idea to go whole hog and collab on a track as well, and now here we are. It’s rare these days to find projects as different and exciting as PostWax, and the veritable carvery of bands on board is mouth-watering. Sausage.”

Lowrider’s Peder Bergstrand adds: “Few releases have moved me the way Elephant Tree’s Habits did. My most played track of 2020 was easily »Sails« and honestly I think Elephant Tree in many ways is the most original flavor of heavy rock I’ve heard in ages, and exactly what the scene needs. I love how they weave blissful and mellow with absolute skull crushing heavy for a blend that’s uniquely their own. The idea of doing a split together, and a PostWax exclusive collaborative track at that, has got us enormously stoked. I have a feeling this will be a very, very special album.”

REZN guitarist Rob McWilliams elaborates: “Our intention is to give this collaboration a solid REZN foundation with Vinnum Sabbathi providing the cosmic textures and atmosphere to align it all under the same sonic storyline. We’ve been talking about doing something together for a little while now, since our bands are a great match sonically and already sync up in a lot of ways. In the end, we’ll have a roasty REZN dish with a decadent Vinnum Sabbathi glaze.”

Vinnum Sabbathi guitarist Juan Tamayo adds: “For us, this collaboration with REZN is very special. From the day we played with them in Mexico, we knew we wanted to create something together, and being able to do it with Blues Funeral for the PostWax series is a great privilege. We can’t wait to make something truly unique by adding a story to the sonic landscapes, and all the fans are in for some cosmic epicness.” 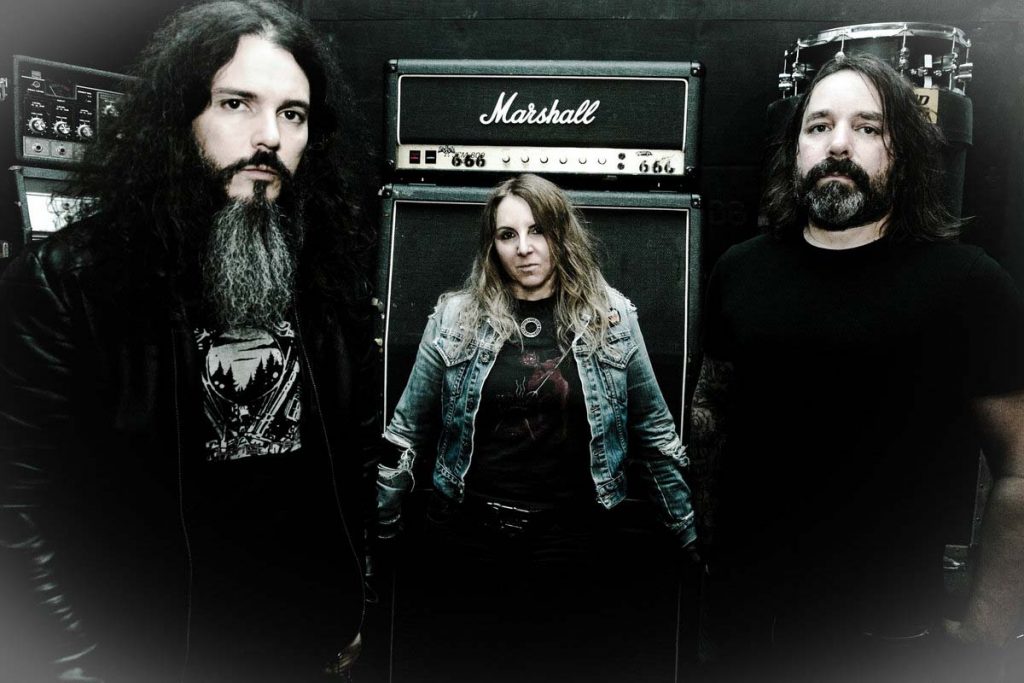 The PostWax series present exclusive limited edition records from some of the best stoner rock, doom and heavy psych bands on the planet. Benefiting from a spectacular Kickstarter success in 2018, PostWax Year One debuted monster releases to subscribers first – including Elder’s »The Gold & Silver Sessions« and the seminal comeback album »Refractions« from Lowrider – which were subsequently released in standard retail versions to the public several months later. »PostWax Vol. II« will unfold as a series of 9 deluxe releases on gorgeous vinyl, with each record including at least one exclusive track only available to PostWax subscribers, also featuring next-level sleeve design, hand-crafted art and illustrations, and behind-the-scenes liner notes by JJ Koczan of The Obelisk. The first »PostWax Vol. II« release will be delivered directly to subscribers in the summer of 2021.

When launching PostWax in 2018, Blues Funeral Recordings committed to donate 10 percent of the first series profits to national nonprofit Little Kids Rock, an organization that supports youth through music education. “We hope our donation helps them continue to make sure the next generation of riffmongers, skin-bashers and tone snobs keeps creating real rock!” declared Blues Funeral founder Jadd Shickler. The operation will be renewed through »PostWax Vol. II«, with each subscription contributing to support this great cause. 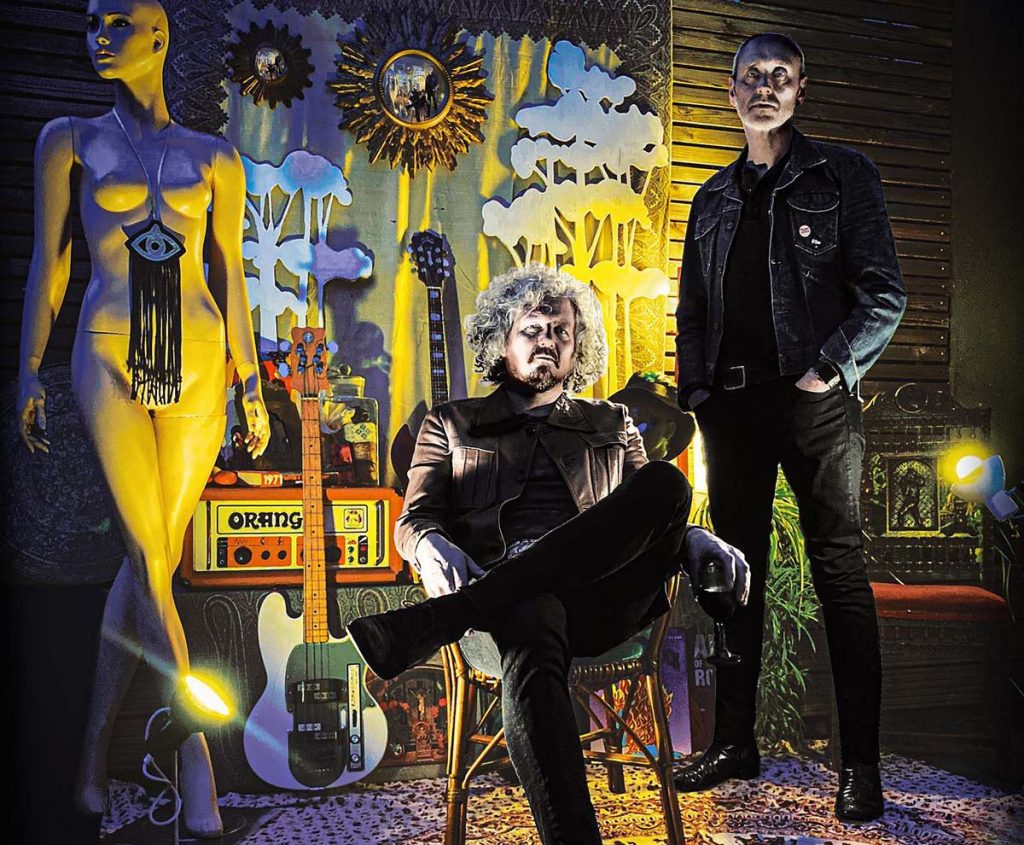 About Lowrider:
As the preeminent band out of the gate in the late 90s post-Kyuss wake, Lowrider’s debut EP and seminal album »Ode To Io« were foundational slabs at the dawn of stoner rock. The swinging metal offshoot grew quickly into a worldwide phenomenon, with Lowrider established as one of its undeniable trailblazers. Following those early releases with a handful of compilation and soundtrack appearances and a period of relative inactivity, the band re-emerged at DesertFest Berlin in 2013. They’ve since blown minds at Hellfest, Keep It Low, DesertFest London and Belgium, Stoned from the Underground and Up In Smoke, and issued expanded remastered versions of their original records. All that was left was to give the world something new. Released in early 2020 through Blues Funeral Recordings, their long-awaited sophomore album »Refractions« explodes with all the churning fuzz and expansive riff-heaviness for which the band are beloved, shot through with re-energized purpose and maturity. All throughout the past year, »Refractions« has garnered high praise from international press, being awarded “Best Album of 2020” on Magnet Magazine, Metal Hammer’s staff lists, The Obelisk, Doom Charts, as well as being featured on top of numerous end-of-year lists such as on Metal Injection, Rock & Folk Magazine, New Noise, Invisible Oranges or Guitar Part Magazine.

About Elephant Tree:
Formed in London in 2013, Elephant Tree have spent the past decade delivering their heavy, melodic sound to audiences relentlessly across the UK, Europe and the USA, with their 2016 self-titled album winning praise from critics and fans alike. Early 2019 saw the band enter The Church Studios to deliver their third album, with engineer and producer Riley MacIntyre (The Horrors, Thurston Moore, Adele) at the helm. With »Habits«, these champions of the underground have delivered perhaps their most cohesive record yet, a scintillating blur of prog, psych, and melodic heavy rock – an ambitious, emotion-driven journey made of spacious yet heavy-as-ever soundscapes, all softly wrapped in Jack Townley and Peter Holland’s enchanting vocals. 2020 was, as foreseen by the clear-sighted, the year Elephant Tree bloom out of best kept underground secret into a household name, making it to the top of year-end lists and making appearance on BBC Radio 1’s Rock Show as well as reaching number 14 on the Official Charts Rock & Metal and number 25 on the Official Charts Indie lists.

About REZN;
The music churned out by Chicago quartet REZN somehow manages to convey both crushing mass and cosmic weightlessness. The seed was planted when guitarist Rob McWilliams and bassist Phil Cangelosi began jamming together at age twelve in the DC commuter town of Leesburg, VA. They relocated to Chicago in 2015, recruited Patrick Dunn to bash on the drums, and set about recording their debut album »Let It Burn« after playing just three shows together. Spencer Ouellette rounded out their bottom-heavy sound with the hum-and-squall of modular synth, and the added textural component immediately became a key facet to their sound. REZN quickly established their footing in the heady-and-heavy Chicago rock community, playing with esteemed riff barons like Bongripper and Oozing Wound, as well as landing coveted slots for Conan and Acid King. The 2018 sophomore album »Calm Black Water« continued the band’s penchant for molasses-thick guitar-and-bass punishments with soaring minor key vocal melodies, but Ouellette further pushed the dreamscape envelope by supplementing the synth duties with blissed out saxophone passages. REZN’s newest offering »Chaotic Divine« continues their melding of gargantuan heaviness and lysergic calm, as well as the band’s penchant for tying the music to a visual landscape.

About Vinnum Sabbathi:
Formed in 2012 in Mexico City, Vinnum Sabbathi merge loud, slow and distorted riffs with samples from science and sci-fi to create a unique sonic experience. From 2013 to 2016, the band released two EPs and two split albums, but it’s their 2017 debut album »Gravity Works« (LSDR Recs) that really caught the international scene’s attention. Their space-themed doom traveled from Mexico to the Old Continent’s shores, leading them to play at Bristol Psych Fest, Doomlines and Sonic Blast Moledo. Between 2018 and 2019, the band released two more split records including »The Good Earth Is Dying« with Cegvera, also playing shows with Red Fang, Rosetta, Rezn and Truckfighters. Early in 2020, their sophomore album »Of Dimensions & Theories« sees the light of day and slowly but steadily proves that science, space and riffs belong together, leaving an elephantine trail for their works to come.

About Acid King:
For as loud as their riffs and roars are, Acid King’s legacy is as unassuming as it is enduring, casting a quiet shadow over the underground for over two decades. Formed in 1993 by frontwoman and guitarist Lori S., bassist Peter Lucas and drummer Joey Osbourne, the band’s name was inspired by Ricky Kasso, the satanic stoner given the nickname “Acid King” by peers for his chronic hallucinogenic drug use and the murder of his friend in New York in the early 1980s. Acid King has recorded four studio albums and three EPs with a series of bassists, and have earned reverence from the stoner doom scene for their massive low-end tone, spacey atmospherics and Lori’s distinctive vocal delivery. Bathed in distortion and baptized in a plume of smoke, the Bay Area trio’s 2015 album »Middle Of Nowhere Center Of Everywhere« received widespread critical acclaim from international tastemakers. They embarked on tours of the States and Australia, appearing on festivals including Psycho Las Vegas, Erosion Fest, Desert Generator, and more as well as sharing the stage with everyone from Sleep and Down to Blue Öyster Cult, Red Fang and YOB.

About Josiah:
At least a decade ahead of their time, Josiah had a three-album run between 2000 and 2008 that few in heavy psych-driven rock could (or can) match. Their 2002 self-titled debut, 2004’s »Into The Outside« and 2007’s »No Time« saw guitarist/vocalist Mat Bethancourt, bassist Sie Beasley and a succession of drummers touring Europe and their native UK, playing fests like Roadburn (’05 and ’07), Duna Jam, and Stoned From The Underground, and taking their searing Cream and Grand Funk meets Colour Haze and The Atomic Bitchwax blend on tour across the continent. Nine years removed from Josiah’s last release, the members began to jam again, crafting songs with a darker edge to suit the times. Rumors of »The Resurrection« began to spread, and with a chance to record amid the pandemic-stricken latter half of 2020, Josiah set to work on their return album, forging ahead from the past to reclaim their legacy. 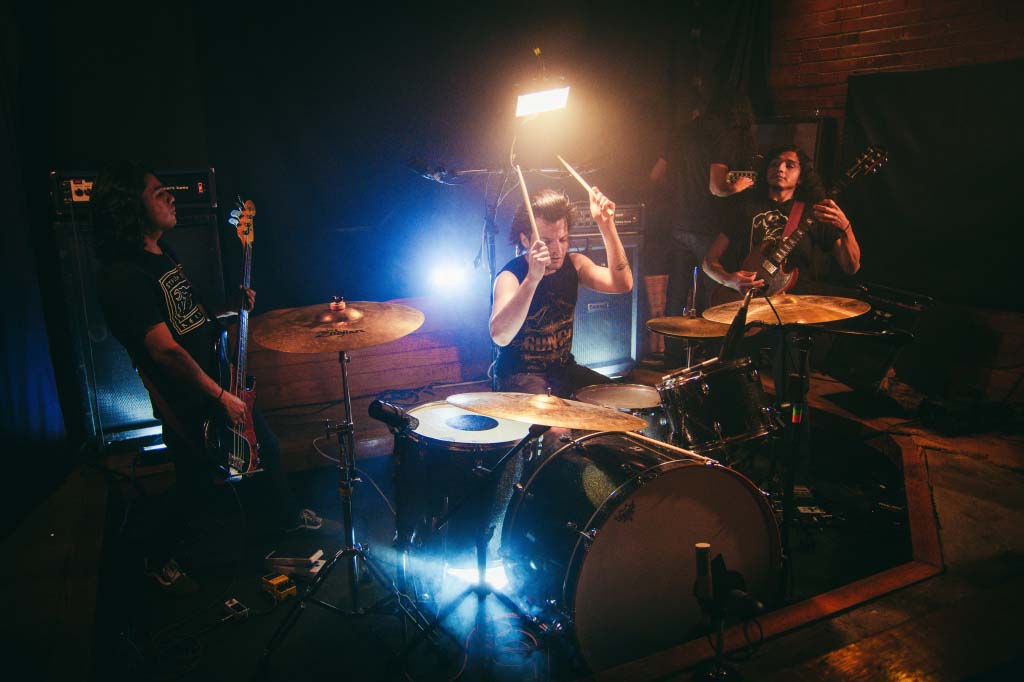