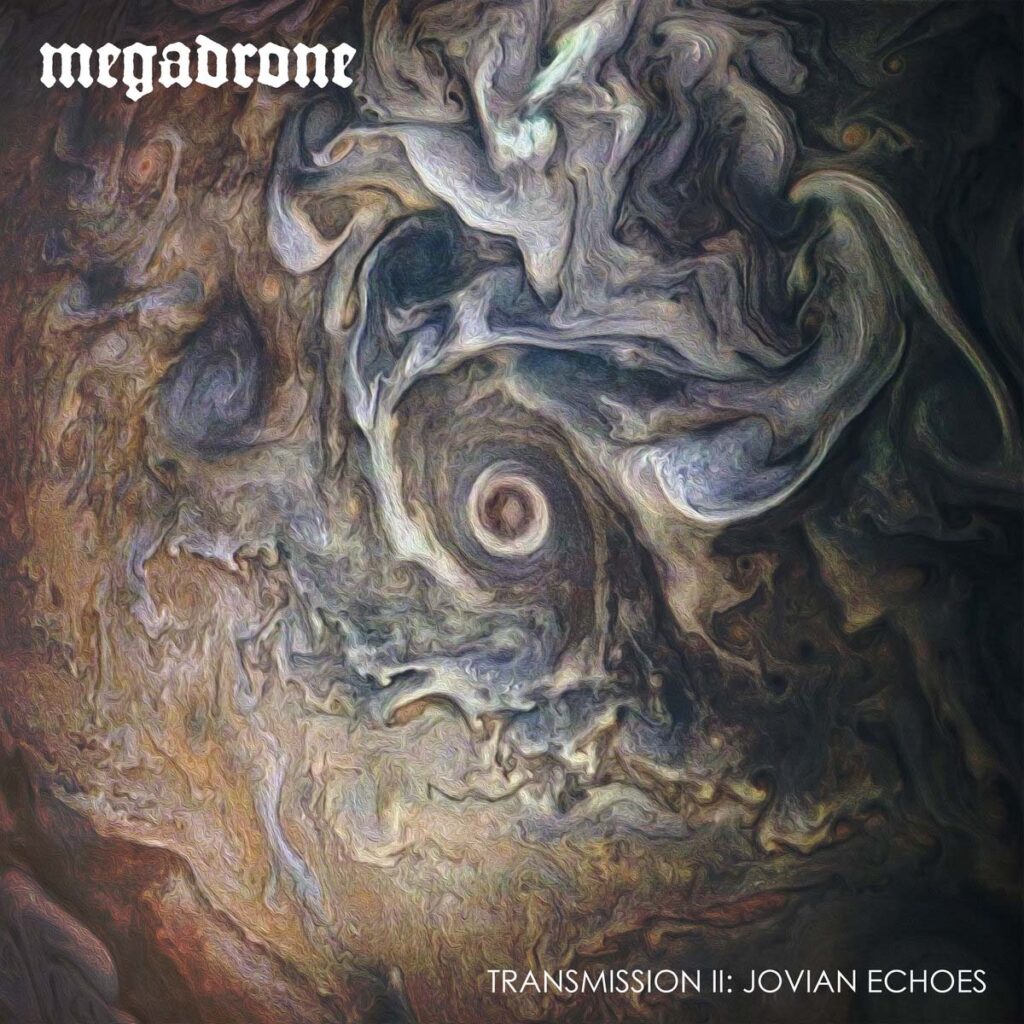 Titled »Transmission II: Jovian Echoes«, the sophomore LP from Megadrone will be released on March 4 2022 on digital, CD and cassette tape formats. We are hereby delighted to unveil the magnificent cover art.

The six-track, 48-minute offering is sure to hypnotize fans of all things heavy, cosmic and psychedelic. Headphones strongly recommended for an optimal listening experience.

The first “single” from the album, »III«, was premiered in the form of a music video last Friday December 3, aka Bandcamp Friday, along with the pre-order launch of the album, on megadrone.bandcamp.com.

Heavy-psych duo Megadrone become the 30th band to join the MAR family, and add yet another unique facet to the already diverse label roster, with their brand of cosmic psychedelia.

Every band on the label pursues its own different style and interpretation of heavy music. Every such interpretation has its own vibe and serves its own purpose. But every once in a blue moon comes along a band or a project that showcases the sheer mind-bending power of music, more than anything else. Megadrone undoubtedly is one such band.

Upon listening to Megadrone’s existing set of self-released recordings, MAR owner Andrew Bansal found himself deep in a hypnotized trance, and delved only deeper with every repeat listen. The uninitiated around the globe (and beyond) now must experience the same.

This is what Megadrone has to say about signing with MAR: “We are extremely grateful and humbled by the opportunity that has been presented to us by Metal Assault Records. Over the the next couple of years you can expect heavy amp worship, experiments in tone hunting, twisted psych-drenched synth driven experiences that’s bound to leave you in a dark afterglow. It’s a small step for us, and a giant leap for experimental droogies, psychedelic lotus eaters everywhere.”

From the nether regions of infinite space comes the mind-altering, interstellar behemoth, Megadrone.

Conjured from the akashic aether and drawing from the world-shattering frequencies laid down by ancient riff mammoths, Megadrone infuses doom-laden heavy music with hallucinogenic meanderings and ambient daydreaming.

Megadrone’s cosmic salvo is a plunge into the subconscious void. In essence, to boldly go where no mind has gone before.