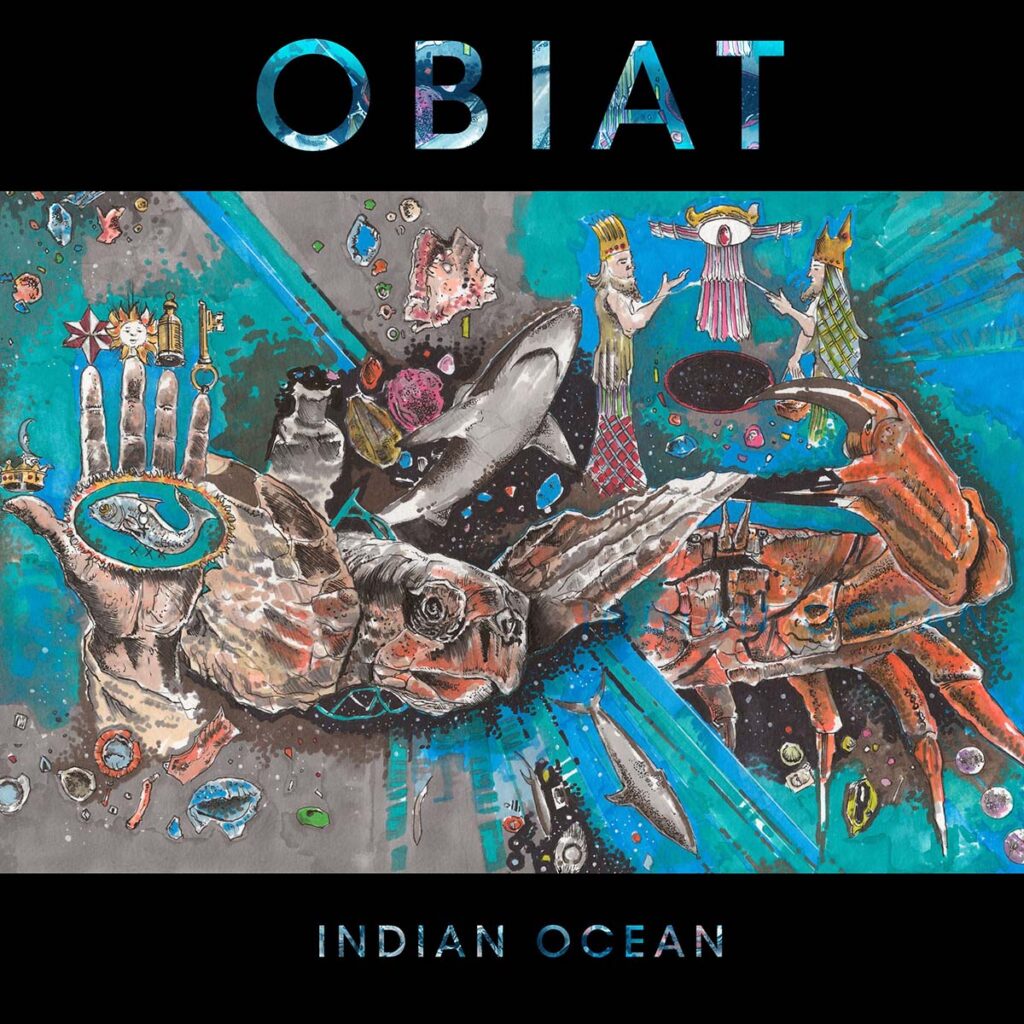 UK/Australia based progressive sludge/doom metal outfit Obiat returns with their new album, »Indian Ocean«, which will be released on July 4th, 2022.

Their 4th album: »Indian Ocean« is now ready for release (scheduled release date: 04.07.22). Mixed and mastered by Chris Fielding (Conan, Electric Wizard, Napalm Death). So far, the new album has been supported by two singles (»Sea Burial« and »Acid Wake«) which were premiered via The Obelisk, 666MrDoom and Rob Hammers YouTube channels during 2021 and are available through most music streaming services.

About the members and how they got here:

Obiat is a British band with Polish roots. The band was formed in Szczecin, Poland in 1998 by Rafal ‘Raf’ Reutt and Adam Cichocki before relocating to London in 2000, where they hooked up with Hungarian born singer Laszlo ‘Laz’ Pallagi. The band cut their teeth on the live circuit alongside a plethora of guest musicians who would also go on to contribute to their studio recordings over the years, including Marlene Ribeiro (GNOD) Simon Oakes (Peach, Suns Of The Tundra) Andrew Prestidge (The Osiris Club, 40Watt Sun, Warning, Angel Witch, Winters, SOTT) John Mitchell (It Bites, Arena, Kino, Lonely Robot) – A full list is available on the band’s social media platforms.

Obiat have had the pleasure of playing all over the UK and Europe through numerous tours and festival appearances, sharing the stage with the likes of Electric Wizard, Orange Goblin, Pelican, My Dying Bride, Voivod and Testament to name just a few.

Three albums have been released to date:

»Accidentally Making Enemies« (2002), »Emotionally Driven Disturbulence« (2005) and »EyeTreePi« (2009) which was released on America’s Small Stone Records, engineered by Chris Fielding, then mixed and mastered by the illustrious Billy Anderson (Melvins, Neurosis, Swans, Sleep, Brutal Truth, Mr Bungle). »EyeTreePi« saw the addition of Alex Nervo on bass and Neil Dawson on drums/percussion, resulting in what the band say is the core that they’ve been searching for since it’s inception. All albums are available on Bandcamp, Spotify, YouTube music and many more platforms.

Over the last decade members have been involved in multiple side projects such as The Osiris Club, Hung On Horns, Sycopath Condor, Xyanix, recording albums and playing live in the UK, Europe and Australia.

Obiat are now back with a renewed passion and energy, consisting of founding member and riff meister Raf Reutt, returning members Alex Nervo with his tasteful and thunderous bass, Neil Dawson with his riff driving dynamic grooves and their new vocalist Sean Cooper (Sean has performed live with Obiat in the past, he then went on to record few albums with The Osiris Club, together with Raf) projecting his powerful, soulful vocals which you’ll want to sing along with.

The plan, inline with what the band has always stood for… Write and release heavy music, keep improving on production qualities and include respected guest musicians to keep things interesting and fun for both the band and the listener, wherever they are in the world.

Come and join the journey, all are welcome!!