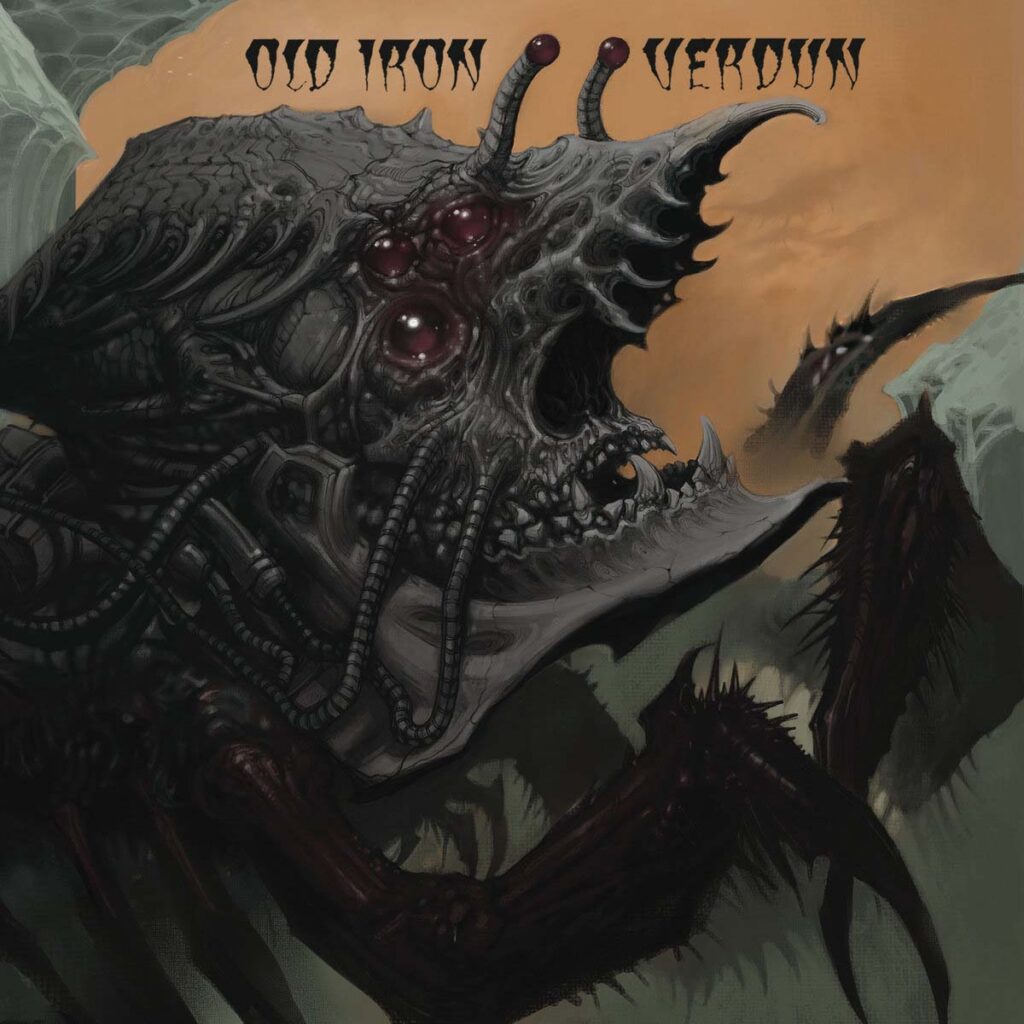 Seattle, Washington-based sludge bringers Old Iron have unveiled their latest video for »Strix Nebulosa«. The punishing ode comes by way of the band’s split 12” with Montpellier, France’s doom/hardcore practitioners Verdun. Initially released in Europe last Fall, the brutalizing four-track offering is out now in the US via Satanik Royalty Records.

Old Iron aspires to weave sprawling psychedelic sludge tapestries. Jerad Shealey (The Helm, Heiress) and Jesse Roberts (Sandrider, Kid Congo Powers, The Ruby Doe) started writing music with original drummer Brandon Ramses during 2011 with the goal of getting loud, heavy, and weird. Later that year their first self-released full-length »Cordyceps« (2012) was recorded in Jesse’s basement. Current drummer, Trent McIntyre joined the ranks soon after. With McIntyre in the equation their second record came into focus. With Matt Bayles (Mastodon, Botch) at the engineering helm, »Lupus Metallorum« (2016) was recorded at The Red Room in Seattle and released on Good To Die Records in 2016. Shealey crossed paths with Florien of Verdun while touring with Kid Congo Powers and a lasting friendship was born. They kept in touch and eventually the idea of a split came up and the rest is history. 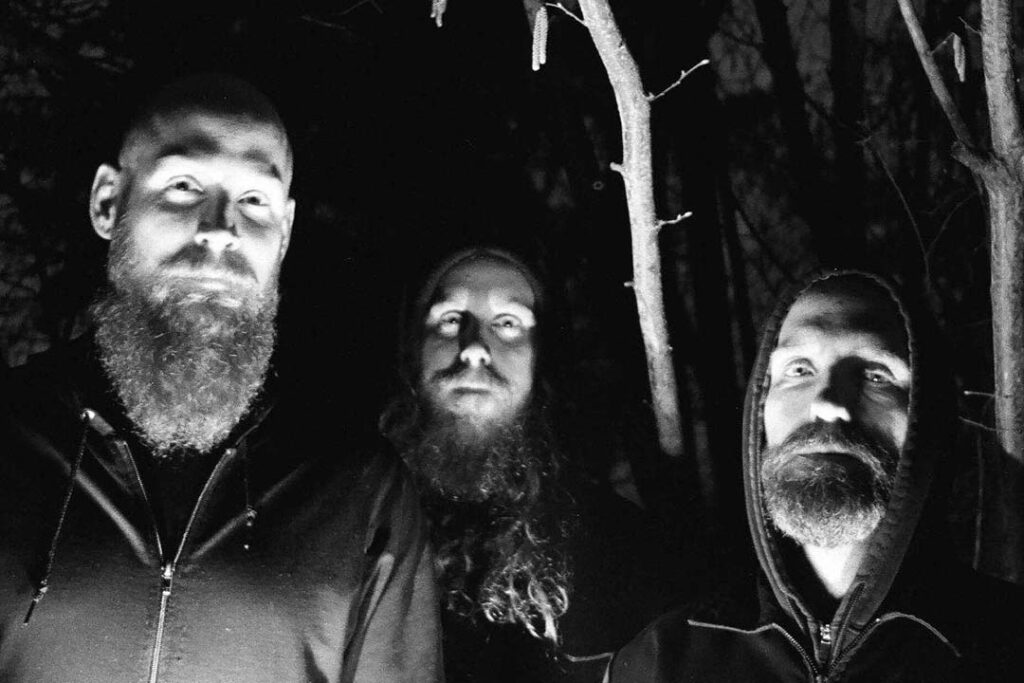 Forged in 2010, Verdun made a name in the realm of slow and heavy music on the basis of a simple three-track demo, leaving a strong impression on every witness of the band’s thunderous live shows. The band has since released two full-lengths: »The Eternal Drift’s Canticles« (2016) and »Astral Sabbath« (2019). Far from simple amplifier worship, the band excels at tinting their sludge/doom roots with metallic hardcore toughness, burden-of-the-world melodies and charismatic vocals, switching between echoed screams from outer space, spoken words or mournful clean vocals. Verdun develops its hybrid doom/hardcore through a composition of new track »Narconaut« and a very personal rendition of Morbid Angel’s classic »Dawn Of The Angry«. 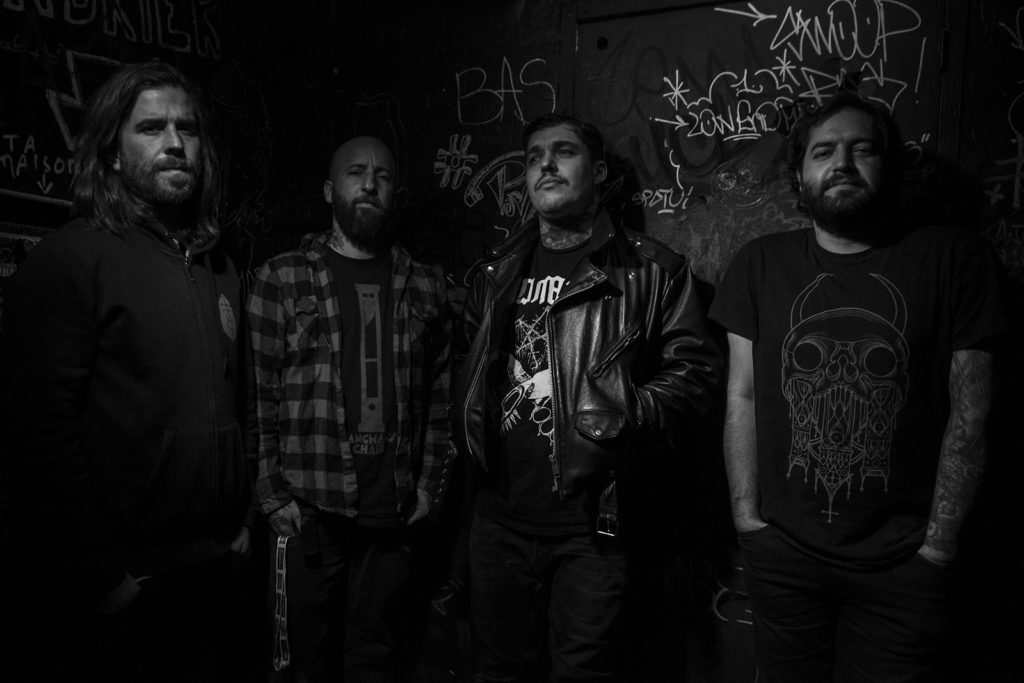 Writes Metal Storm of the split, “[Old Iron] open up the debut with the ferocious sludge doom track »Planetesimal«, with vicious roars, quality riffs, and some really tasty guitar leads that elevate the song. Showing themselves to not be one-dimensional, Old Iron opt for a slow atmospheric build into »Strix Nebulosa«, which turns down the venom in favor of a more emotional approach, whether coming from the sad guitar leads, the melancholic of the chords in the riffs, or the soft outro. With Old Iron doing such a fine job with their two songs, the bar is high for Verdun, who rise to the challenge with »Narconaut«, a song that fits many of the different elements of Old Iron’s songs into a single track, with a side of stoner fuzz in there to boot. Rounded off with an impressive reimagining of Morbid Angel’s »Dawn Of The Angry«, this split is the pick of the bunch in this issue…”

The Old Iron/Verdun split is out now on Satanik Royalty on vinyl (Clear and Orange Smoke) and is available for pre-order HERE. Find digital orders at THIS LOCATION.

“Verdun and Old Iron’s universes offer two sights of doom/sludge. Whether both bands love saturation, slowness, and heaviness, we feel a dark dirt with Old Iron, while Verdun develops airy and mysterious sonorities. And you’ll love both of them.” — Acta Infernalis

“…a black, sticky, haunted record, with an evil and misty heaviness. A beautiful black record on which the two bands complement each other perfectly, creating a harmony in their chaos. Special mention to the very nice cover drawn by Jesse Roberts of Old Iron.” — Le Scribe du Rock