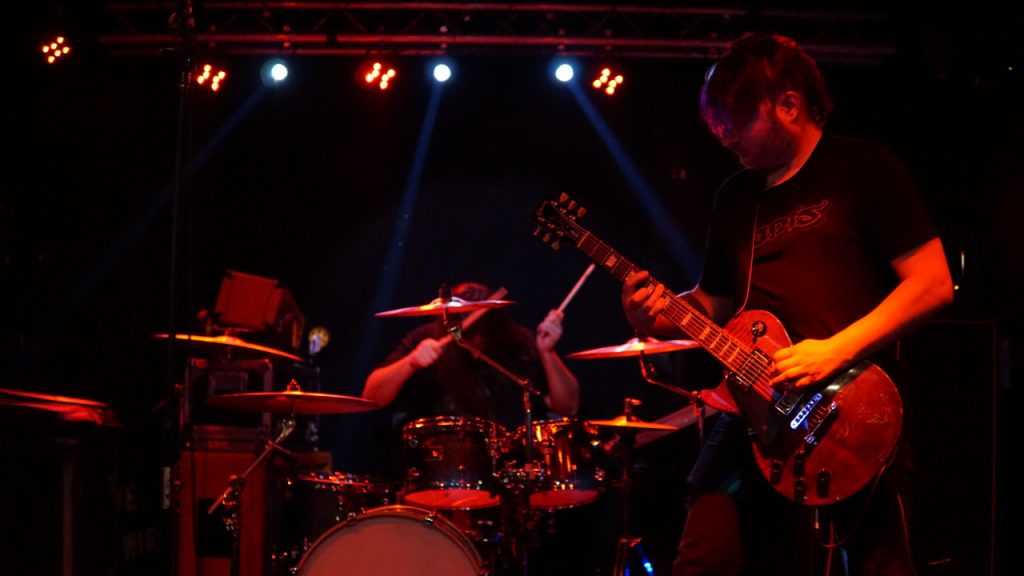 Chicago, Illinois based instrumental doom metal duo Plague Of Carcosa is back after a year’s break and have released a live performance video​ for the tracks »Rats In The Walls« and »Sarnath«.

After a year’s silence, Plague Of Carcosa announces their return with a brand-new live performance video featuring guitarist Eric Zann and new drummer Alexander Adams summoning doom almighty at Chicago’s Livewire Lounge. The duo feuds with the darkest of voids in this two-song, half-hour performance consisting of the band’s standing behemoth »Rats In The Walls« followed by an entirely new piece called »Sarnath«, named after the ancient city of Lovecraft’s writing.

Recorded safely at Livewire during the Coronavirus pandemic and resulting shutdown, Zann and Adams were armed with loopers, oscillators, fuzz, and modulators, deployed to summon waves of doom and distortion. Their goal: invoke storied ancient horrors soaked in modern feedback. The video features dynamic on-stage shots as well as abstract washes to highlight Plague Of Carcosa’s forays into noise and ambience.

Plague Of Carcosa’s propensity is creating dense sound-walls that proceed feverishly and ominously, not with a fist’s punch but instead a ghost’s nocturne – the mystical mood of their music derives not from any forced style but instead the courage of their atmospherics and the utilization of saturated live effects for maximum impact. And as the band commands the stage in the video, their huge sound joins the visuals in bringing the experience of being right there – a sorely missed sight indeed, considering the pandemic.

The band is currently fine-tuning song structures on new material for a sign cycle that weaves their dark brand of doom with the ancient, mythical locales written about by HP Lovecraft – Sarnath, the ancient city, Ulthar, where no man may harm a cat, and more. These songs will see Plague Of Carcosa experimenting even further with noise, effects, and obscure song structures.

The video was shot and edited by Andrew Rothmund. The audio was recorded live by Dave Hornyak of Livewire Lounge and mastered by Plague Of Carcosa.