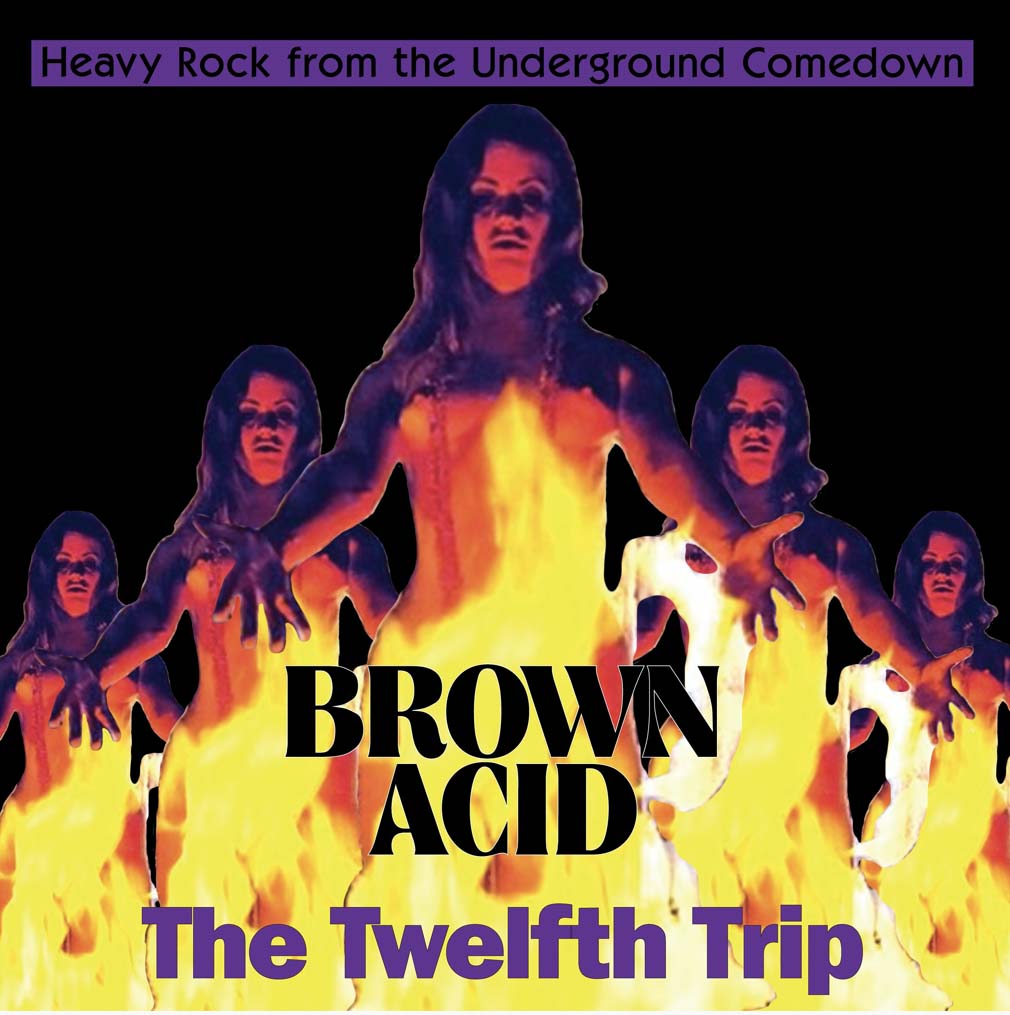 White Lightning’s blazing double-kick drum, sizzling melodic riffs and Jim Dandy howls on »1930« is a power metal rocker from 1969 that perfectly epitomizes the raison d’être of this series. The Minneapolis, MN band formed by guitarist Tom “Zippy” Caplan after he left garage psych heroes The Litter, later shortened its name to Lightning. The group only issued one proper album before disbanding in 1971. However, with the late 1990’s reissues and revival of The Litter, Lightning’s bevy of unreleased recordings also surfaced as a self-titled LP and »Strikes Twice 1986-1969« CD compilation.

The forthcoming latest edition of the popular compilation series featuring long-lost vintage 60s-70s proto-metal and stoner rock singles, »Brown Acid: The Twelfth Trip« will be available on April 20th, 2021. Hear and share the latest single, the maniacal 1969 rocker »1930« by White Lightning via YouTube and Bandcamp.

Previously, »Mother Samwell« the 1969 rocker by The Waters was launched via YouTube. And, »Woman (Don’t You Go)« by Shane followed in March on YouTube.

Some of the best thrills of the Internet music revolution is the ability to find extremely rare music with great ease. But even with such vast archives to draw from, quite a lot of great songs have gone undiscovered for nearly half a century — particularly in genres that lacked hifalutin arty pretense. Previously, only the most extremely dedicated and passionate record collectors had the stamina and prowess to hunt down long forgotten wonders in dusty record bins — often hoarding them in private collections, or selling at ridiculous collector’s prices. Legendary compilations like Nuggets, Pebbles, ad nauseum, have exhausted the mines of early garage rock and proto-punk, keeping alive a large cross-section of underground ephemera. However, few have delved into and expertly archived the wealth of proto-metal, pre-stoner rock tracks collected on Brown Acid.

Lance Barresi, co-owner of L.A./Chicago retailer Permanent Records has shown incredible persistence in tracking down a stellar collection of rare singles from the 60s and 70s for the growing compilation series. Partnered with Daniel Hall of RidingEasy Records, the two have assembled a selection of songs that’s hard to believe have remained unheard for so long.

“I essentially go through hell and high water just to find these records,” Barresi says. “Once I find a record worthy of tracking, I begin the (sometimes) extremely arduous process of contacting the band members and encouraging them to take part. Daniel and I agree that licensing all the tracks we’re using for Brown Acid is best for everyone involved,” rather than simply bootlegging the tracks. When all of the bands and labels haven’t existed for 30-40 years or more, tracking down the creators gives all of these tunes a real second chance at success.

“There’s a long list of songs that we’d love to include,” Barresi says. “But we just can’t track the bands down. I like the idea that Brown Acid is getting so much attention, so people might reach out to us.”

“So rare that diehard fuzz junkies say you’d have a better chance of winning the lottery than finding a physical 45 rpm single by one of the bands featured on their latest installment.” — Dangerous Minds

“Will do for hard rock, proto-metal and heavy psych what Nuggets did for garage rock, and bring it to a wider audience of collectors and music fans.” — The Guardian

“Mining the surprising rich reserves of heavy rock and proto-metal from the ’60s and ’70s, these collections have been crucial to understanding the history of a subgenre of rock that had far deeper roots than most fans realize.” — Paste Magazine