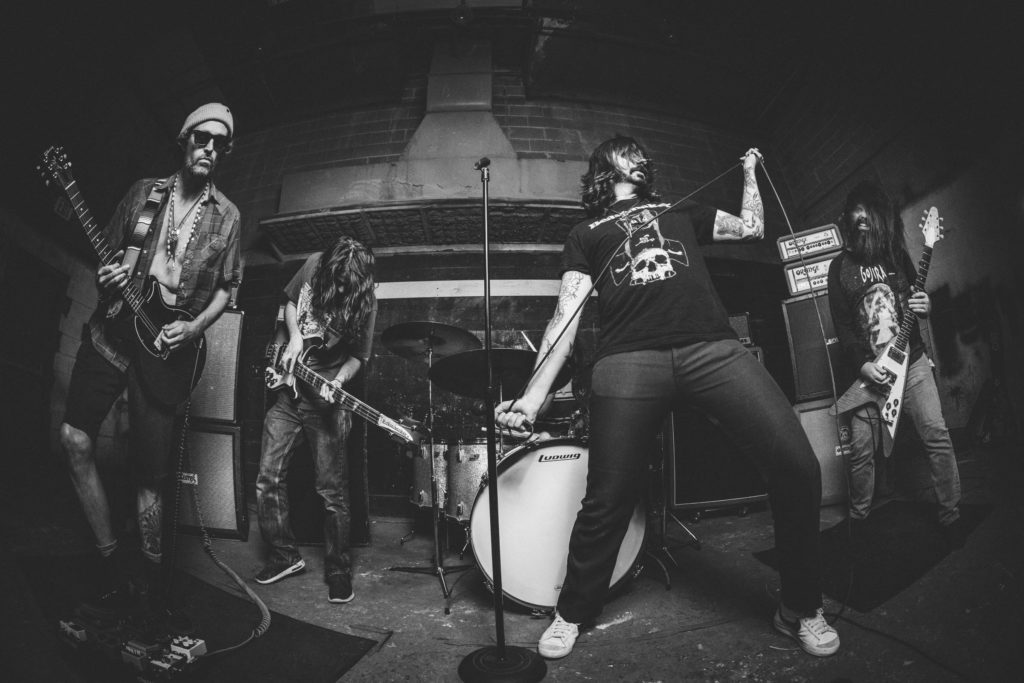 Portland, Oregon based psychedelic stoner doom bringers Robots Of The Ancient World share new music video for the track »Out Of The Gallows« from their sophomore full-length album, »Mystic Goddess«, out on May 21, 2021 via Small Stone Records and Kozmik Artifactz.

Writes The Obelisk in part of »Mystic Goddess«, “…while it’s immediately notable that the five-piece worked with producer/legend Jack Endino (and Mikel Perkins) on the recording of this follow-up to their 2019 debut, Cosmic Riders, having solidified their lineup in the interim, what’s even more notable as one makes the trip through the eight-track/forty-two-minute outing is the cross-microgenre stylistic melange with which the band is working. There are certainly uniting factors in the guitars of Nico Schmutz and Justin Laubscher, the Doors-via-Danzig (Doorzig?) vocal style of Caleb Weidenbach that tops the rolling, fluid groove of bassist Trevor Berecek and drummer Harry Silvers, but the open creative spirit is palpable, from the low-end centered sway and epic-tales vibe of the opening title-track through »Wasteland«’s heavy blues also nodding to Kadavar in its vocal melody, on down through the willful plunge into doom of the ten-minute »Lucifyre« – a penultimate track swaying along to its own languid bassline, rife with trippy leads, shouts of its title and a long noise-and-sample finish… followed only by the CD/DL-only acoustic-into-grunge-riffed closer »Ordo Ab Chao«… The unmitigated Pacific Northwest janga-janga stonerly chug of »Out Of The Gallows« – which, oh, hey, just happens to have a video premiering – betrays the secret of the ooze in its bassy righteousness…”

Read more and view Robots Of The Ancient World’s »Out Of The Gallows« video at THIS LOCATION. 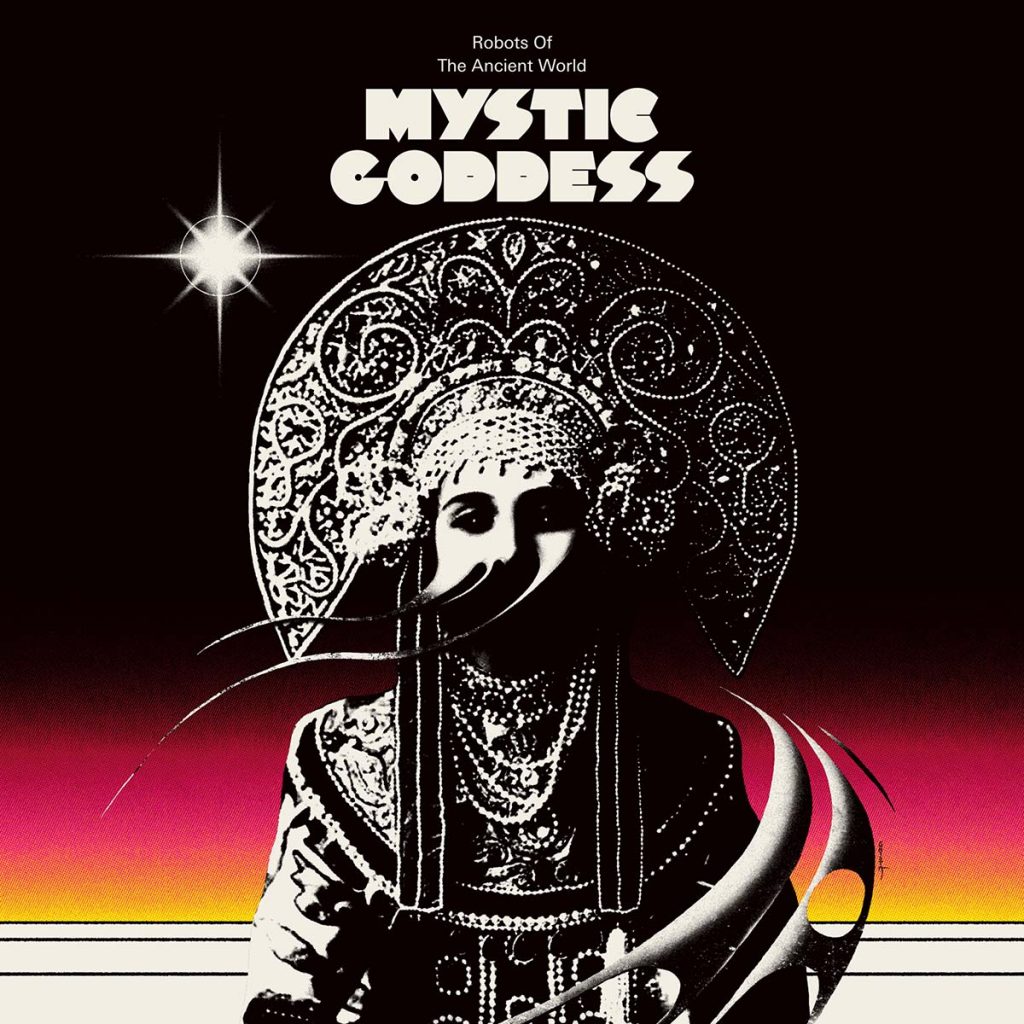 »Mystic Goddess« thrusts forth a forty-three-minute hallucinatory sound excursion through a wide range of styles that keeps listeners engaged while never losing focus or sacrificing flow. Comments The Sleeping Shaman, “ROTAW and Small Stone have an album-of-the-year candidate with »Mystic Goddess«, and perhaps, as time will tell, an-all time classic of the genre. This record touches on all aspects of stoner/doom/riff rock, blending them all together, in eyebrow-raising fashion. Desert rock, cosmic swirling psyche, Swedish-style stoner rock, as well as some grungy riffage… Highly Recommended.” Adds BrooklynVegan, “It’s heavy, riffy, and catchy, and if your taste veers towards this corner of guitar-based music, you should definitely check this band out.”

Find ordering options at the Small Stone Bandcamp page at THIS LOCATION where the record can be streamed.

Formed as a result of a rare 2015 planetary alignment, Robots Of The Ancient World made an immediate impact with a meteor shower of cosmic grooves and high-octane riffs in the galactic vortex where doom, psych, and stoner rock collide. As a live act, they are a force with which to be reckoned and their 2019 debut »Cosmic Riders« has garnered over 300,000 plays and counting on digital streaming sites, including Bandcamp, Spotify, and YouTube.

Eager to take their sound to uncharted regions of the galaxy, Robots Of The Ancient World entered Seattle’s Soundhouse Studios in February 2020 to record with Jack Endino, famed sonic architect of the grunge revolution, and his longtime protégé Mikel Perkins. They emerged through the wormhole with »Mystic Goddess«.

“Raw, powerful, no nonsense production is what we were seeking,” says guitarist Justin Laubscher. After connecting with Endino through a friend and veteran of the grunge wars, Laubscher says the band “scraped up every nickel we could and went for it.”

Recorded, mixed, and mastered in six days, Robots Of The Ancient World’s »Mystic Goddess« almost crashed and burned prior to liftoff. Four days in, Endino abruptly fell ill, “wrecked from this weird flu from hell,” according to Laubscher. “At the time, COVID-19 was not yet a thing in the US.” Perkins engineered the final two days of tracking. “Perkins is a legend, stepped in without missing a beat, and we all felt at ease. He entertained our more fringe ideas, the ones up until that point I was apprehensive to present to Jack.” Endino eventually finished the mixes remotely and Perkins is credited as co-producer.

Musically, the new album includes nods to stoner rock titans like the Stooges, Kyuss, and Boris but the band also wasn’t afraid to borrow ideas from Guns N’ Roses and Santana, while deep diving into their usual lyrical fetishes. “I’m intrigued by psychedelics, esotericism, and conspiracy theories. I love to go deep with secret societies, other dimensions, and all that jazz. So, when you hear the Carl Sagan intro to »Cosmic Riders« or David Icke closing out »Mystic Goddess«, it’s a tribute,” notes Laubscher, “a nod to those dudes who are a creative inspiration for my song writing.

“Portland’s Robots Of The Ancient World makes psychedelic stoner doom with a hint of Seattle grunge… and vocalist Caleb Weidenbach tops it off with a howl that sounds more than a little like Danzig. It’s heavy, riffy, and catchy, and if your taste veers towards this corner of guitar-based music, you should definitely check this band out.” — BrooklynVegan

“ROTAW and Small Stone have an album-of-the-year candidate with »Mystic Goddess«, and perhaps, as time will tell, an-all time classic of the genre. This record touches on all aspects of stoner/doom/riff rock, blending them all together, in eyebrow-raising fashion. Desert rock, cosmic swirling psyche, Swedish-style stoner rock, as well as some grungy riffage…Highly Recommended.” – The Sleeping Shaman

“Just lightly fuzzed, ROBOTS have as much Monster Magnet about them as they do hints of the more melodic elements of »Clearing The Path To Ascend«-era YOB. Completed by the solid, slightly twanging clean vocals of Caleb Weidenbach, that remind me a little of Red Fang, the package feels familiar in a number of respects but is also hard to pin down, as it gradually morphs and modulates over its forty-one minutes.” – Angry Metal Guy

“…a fun ride through a smokey haze.” – Modern Free Press

“The sophomore album from Portland, Oregon’s Robots Of The Ancient World finds the deepest desert grooves and sets them lose on the world… The music is laid back guitar-driven desert stoner rock with fantastic and doomy palliative ordinances.” – Flying Fiddlesticks

“With its two guitars underscored by righteously fuzzed bass, my immediate impression of the track takes my head to Acrimony, and that’s neither a complaint nor the sum of what the five-piece have on offer – Jack Endino production never hurts – what with the Pacific Northwestern crunch of their bridge and the mellow stretches that begin and end the song.” – The Obelisk on »Mystic Goddess«’ title track

“ROTAW include nods to stoner rock titans like Kyuss and Boris whilst still retaining their lyrical fascination with psychedelics, esotericism and conspiracy theories…” – Metal Epidemic