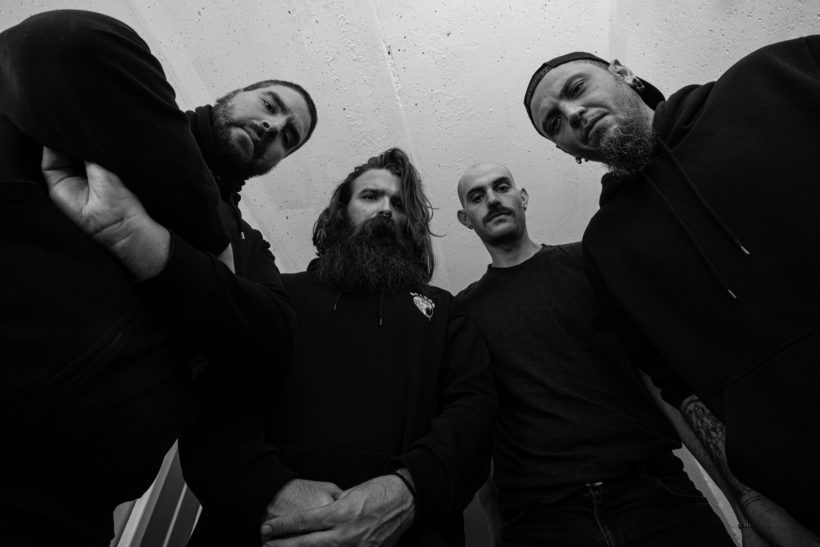 German blackened sludge/post-metal band Shovel share a music video for the new single »I. The Void« taken from their upcoming self-titled debut album, to be released on May 27th, 2022 via Argonauta Records.

“Our first video clip is out, premiering on Decibel Magazine! »I. The Void« is the very first song we ever wrote, before we even decided that we were a band. During its recording process, we realized how important and powerful this song still is for us: our first song. It is a song about seeking refuge in darkness, seeking comfort in uncomfortable situations—a song that incorporates the soul of Shovel as a band.

In order to bring this feeling to the screen, we teamed up with director Alexandros Papathanasopoulos and writer George Zafeiropoulos. With them and their amazing crew, numerous actors, performers, and friends, we were able to capture the meaning behind »I. The Void«. This video expresses this concept of agony and narrates it through the bizarre journey of the protagonist as he descends into the void. Shooting this video during the pandemic, traveling to multiple locations, and gathering so many people was an incredibly difficult task that took months of preparation, incalculable hours of work, and a good amount of luck. Now, very proud and very grateful; We present you our first video clip as Shovel!”

May 27, 2022 will see Berlin-based sludge and post-metal act, Shovel, release their self-titled debut abum via Argonauta Records. Now, the four-piece has premiered a haunting music video clip for »I. The Void« with Decibel Magazine!

Ever since their first gig, Shovel created an immediate connection with the vibrant scene of Berlin, Germany, and following their colossal demo in 2019, they managed to establish themselves within the heavy music underground. The four-piece connects the immediacy of an intense riffage, existential screams and the elusiveness of otherworldly sounds and atmospheres. Emerging from the mud of sludge, doom and post-metal, their music travels through the openness and freedom of psychedelic textures to end up crawling in black metal claustrophobia and despair with an unconventional and distinct sound.

“A couple of years ago, we started playing together; we were not even sure we were forming a band,” guitarist and vocalist Kostis Benning reveals. “Our sincere experimentation and dedication formed these songs- and these songs formed Shovel. Our debut album is for us a diary of feelings, thoughts and ideas during the years that passed. And all of these were so intense, that we collaborated with people whose vision and experience gave us the chance to form these ideas into the album you are about to listen to. Thanks to all the people that helped us, you that are listening to us and, of course, to Argonauta Records for making this all happen!”

Slated for a digital release on May 27th via Argonauta Records with physical editions to follow, the pre-sale will be available soon THIS LOCATION!