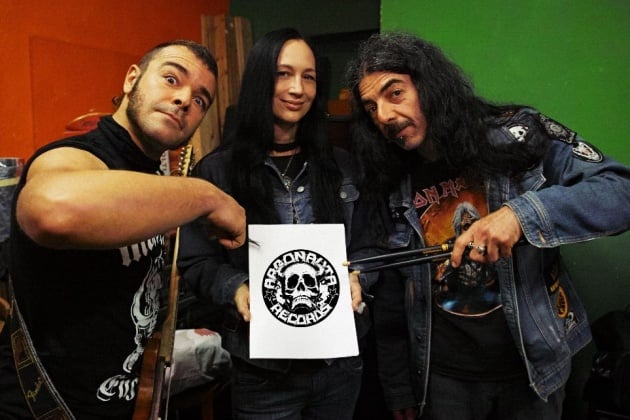 The band will release an limited edition 12” single EP as part of the new Argonauta LTD100 series later this year.

As part of the new Argonauta LTD100 series, heavy rock ‘n’ rollers Sonic Wolves have announced their collaboration with the Italian powerhouse label!

Just recently, Argonauta Records started its special vinyl series, limited to 100 copies of each edition, and to highlight some extraordinary releases of underground bands, special projects or label acts, that may not be under your radar yet but should deserve your attention. After the previously announced releases featuring doom metal trio Hebi Katana and Mitochondrial Sun’s »Bodies And Gold« EP, Argonauta Records is proud to be working with Sonic Wolves as the label’s latest addition to the LTD100 series.

Sonic Wolves is an Italian heavy rock’n’roll band, formed by drummer Vita (formerly of Ufomammut and currently in Rogue State), bassist and singer Kayt Vigil (currently in Rogue State, formerly Pentagram, …Of The Horizon, Syzslak, The Hounds Of Hasselvander & many more) and guitarist Alessandro Camu (Kurt RussHell). With their heavily groovy, dark and dirty sound – highly inspired by 70’s hard rock, proto-metal, psychedelic rock and power blues – Sonic Wolves take hard rock to a nastier and louder level, and one that is hard not to be moved by. Following several European tours, including festival appearances at Desertfest Antwerp, Headz Up and Tube Cult Fest to name just a few, two 7” singles and two full-length albums to date, the trio is currently hard at work of an upcoming, very special 12” single EP, to be released through Argonauta Records later this year.

“Sonic Wolves is excited to start a new collaboration with Gero and Argonauta Records. As individual musicians never having worked with him before, we are pleased to have the opportunity to be a part of an internationally recognized and respected label from our scene,” the band comments. “It brings us great pride to stand alongside such band as Los Natas and our friends Screaming Mad Dee, Suma and Infection Code. In our quest for the perfect collaboration for the release of a unique single, with two special songs inspired by musicians we want to pay tribute to, we came across Gero, whose offer and idea threw gasoline on the fire and set the wheels in motion. With every new collaboration come new opportunity and experiences.
We look forward to taking our fans, thanks to Argonauta Records and Mona of ALL NOIR, to the next chapter of Sonic Wolves with this limited edition 12” single.”