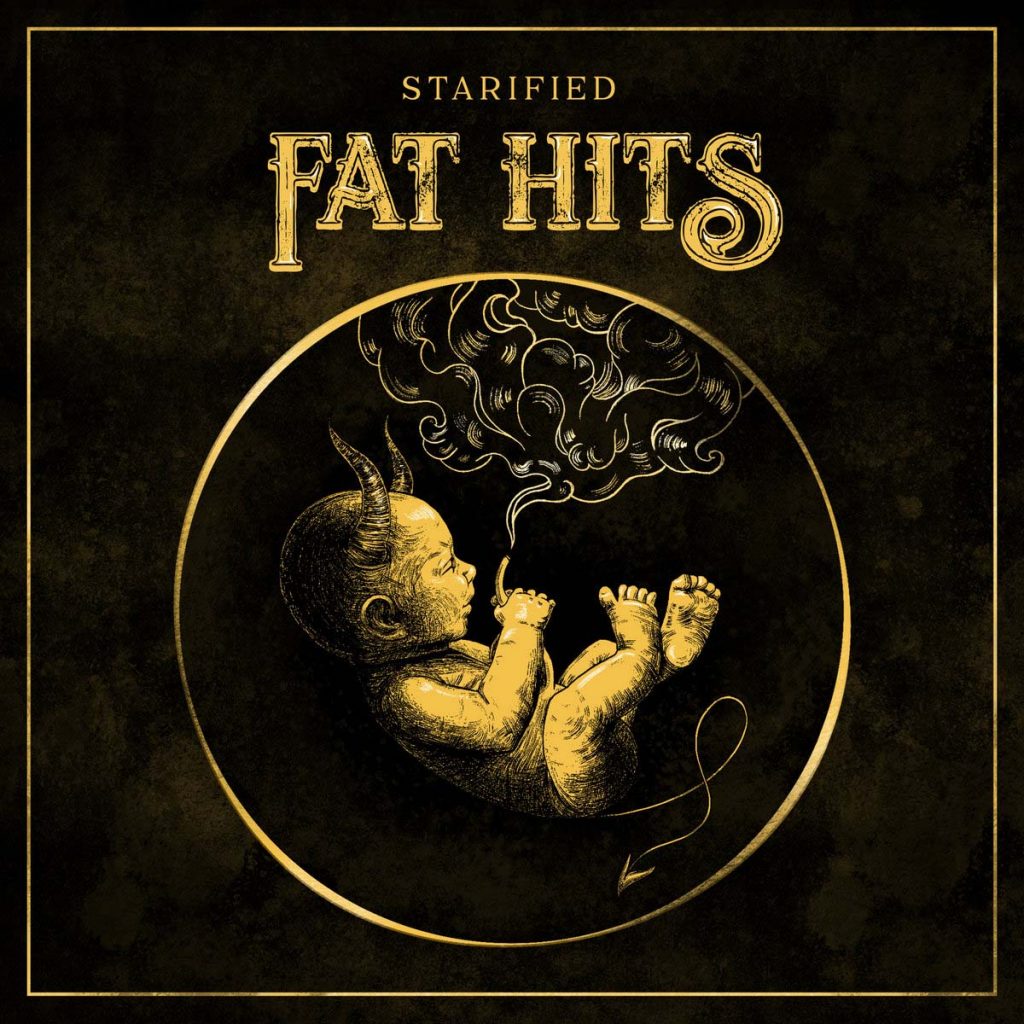 The band members claim themselves students of the old-school rock masters, from Led Zeppelin and Black Sabbath to Foo Fighters and Jack White.

All lyrics and music written, composed and arranged by Starified.
Backing vocals on »An Ode To Tenacious D« by Alina Bakanova and Alexandra Soboleva.
Recorded, mixed and produced by Artem Shcherbakov.
Mastered by Magnus Lindberg.
Album art by Milena Wong.

Starified are masterful purveyors of a high-voltage, pulsating brand of rock filled with hard-hitting riffs, melodic vocals and an all-out in-your-face attitude. Combining their 90s alt-rock and classic rock influences in the most spirited way, the Moscow trio delivers anthem after anthem with an unwaveringly contemporary approach, winning over over Magnus Lindberg (Cult Of Luna) who mastered their new album.

Their aptly-titled third album and first Ripple Music release »Fat Hits« is a wrecking ball of infectious hooks, propelled by knockout clean vocals from drummer Vadim Ambartsumian. With its irresistible stadium-friendly aura, »Fat Hits« has been compared by international critics to an energetic mix of Foo Fighters, Soundgarden, Faith No More and Orange Goblin.

About their new album »Fat Hits«, Starified comment: “It was a long and tough journey: working on the material, searching for the right sound, recording it in Moscow’s best studios, mastering the album in Sweden with Magnus Lindberg from Cult Of Luna. »Fat Hits« has already changed our lives. We dedicated our hearts and all of our energy to this work. »Fat Hits« is right for you if you love music and the emotions it evokes, and not a specific genre. We were influenced by too many artists and genres so one or two hashtags wouldn’t work. You decide.”

Starified is a hard-hitting, groovy and heavy rock trio founded in Moscow in 2017 and powered by drummer and vocalist Vadim Ambartsumian, Yuriy Berezovik on guitar and Dmitri Shurpakov on bass. Starified’s new album »Fat Hits« is the follow-up to their 2018 outing CSBR Records outing »Feathers«, which found the band revamped from a five-piece to a trio, with just guitarist Yuriy Berezovik and bassist Dmitri Shurpakov carried over from the original lineup on the prior 2017 self-titled debut. The newcomer in this pared down version of the group for »Feathers« was lead vocalist/drummer Vadim Ambartsumian, and he continues to make an impression as Starified strip away excess from their songwriting and refine their material on »Fat Hits«.

From the opening bruiser »Scapegoat« through »Don Loco« and the sans-frills structures of »What If« and »Anti-Rebel«, »Fat Hits« is clean and sharp in its production and holds its purpose in the songcraft, but isn’t to be taken lightly in terms of performance. Less “a drummer who sings” than both a drummer and a vocalist, Vadim Ambartsumian casts a significant presence and is forward in the mix, but he, Berezovik and Shurpakov are all pretty clearly on the same page when it comes to knowing what they want their sound to do, and that would seem to be to engage as many ears as possible. (Words by JJ Koczan, The Obelisk)