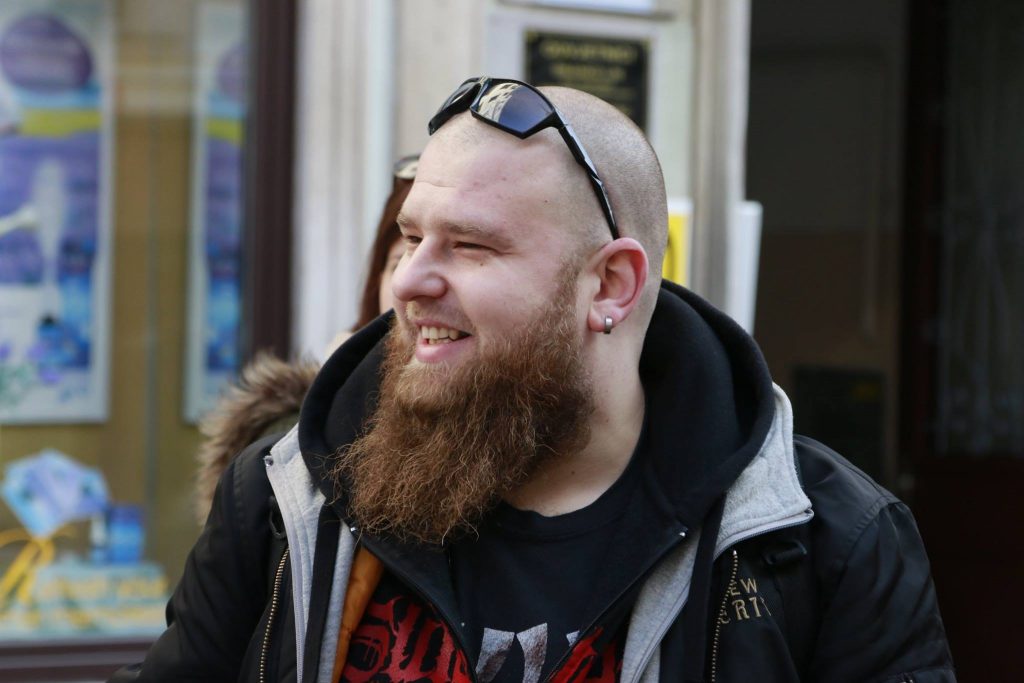 Uma, formerly known as Uma Thurman, is a instrumental stoner band from Rijeka, Croatia, named after Tarantino’s muse. Their trippy flair, fierce stocks and noise requires more than just listening to music and calls for deep relaxation of the mind with the occasional explosion of emotion.

I had a nice chat with hyperproductive drummer Vinko Golembiowski, who is also an active member of music scene in Rijeka, the main man behind Dark Circle Festival, music enthusiast and by all means a great guy.

You are not a new name to stoner rock fans at all, but you’ve been absent from the scene for a few years. What you’ve been doing in that time?
Vinko: Well, at one point Neno and me moved to Ireland and also decided to take the band with us. After our comeback we have been searching for a bass player and how to restart the band while we were working on new material.

What is the main reason that you changed your name from Uma Thurman to Uma?
Vinko: Our bass player and founder of the band left the band for good. So we decided that at that point Uma Thurman is something of the past and it was a good time to move on with a new name. Also, we thought that at one point lawyers of the actress Uma Thurman could send us an email that we can’t use this name anymore so we decided it’s best to forestall them.

After the reunion or the original line-up you also got a new bass player now. How did you find Matej Hanžek of doom metal band Old Night?
Vinko: Oh, hehehe, Matej was a long time in our black book as a great musician that we want to play with. So we actually asked him immediately after our bass player left if he is up for joining the band. At that time he had a lot of work with Old Night and wasn’t able to jump in. After our gig on Dark Circle Festival in Rijeka, he came to me (drunk, I must say 😀 ) and said: »Dude, this is awesome music! Does the offer still stands?« I said yes, and the rest is history. I did thought that since he was drunk, tomorrow he will say that he can’t join in. But nope. I called him and he said that he is in the band and laughed. The guy stands behind his word no matter how drunk was he. Hahaha… This is why I like him even more.

Is this a new start for the band or you continue musically right where you stopped?
Vinko: Well I would say that it’s just un upgrade from where we stopped. We have more experience and already played some of the songs from new album before, and also some of the riffs are from our ex bass player Dejo so yeah, we are just making story of UMA even bigger.

Your music seems to be about telling all kinds of stories. What would be your main inspiration?
Vinko: Hehehe, yeah instrumental music that says a lot of stories. Hehehe. Well if people watch carefully there are few things that we played with trough years and trough our albums. On first one the names of the songs were a lot about the classical stoner stuff where we joke about the things in stoner life smoking weed and tripping and so was the music trippy and more easy going. On second one we named few of the songs after the lines in the movies that Tarantino and Uma Thurman used, but also had few of our own crazy ideas. Concept of the album was created with the idea of two sides of the album. Light one and Dark one. Like the force in Star Wars. As you can see, a lot of our ideas come from movies and their great stories. The third one made us do our own story named simply Uma. It is a story of a sleek but drunk and stoned demon named Loris where with a help from witches, teleports, stoned rockers, Count Dracula and other creatures is trying to save the existence as it is now. Will he succeed and should he we will know at the end where there will be and thriller ending. It’s an dark humor/action-fantasy story that follows the music of Uma and will give our fans another sublevel of art that they can enjoy while listening to our music.

You are about to release your new full-lenght album. When can we expect the release?
Vinko: At this point we are not sure, but we just HAVE TO do it this year as it’s our 10th year anniversary so we will do our best to finish it before 2020 is over.

Your upcoming self-titled release is a conceptual album. Can you tell me something more about it?
Vinko: Well I already gave a hint of it in the question before. It’s a story that I wrote 10 years a go just for fun. We love movies like Dogma, Constantine, Little Nicky and El Dia De La Bestia and many others who play with alternative stories of God, Devil, demons, angels, Heaven and Hell so I wanted to make my own fantasy story and have a laugh about it. So, like a year a go we had an idea to give our fans something more than just music, since we don’t have any lyrics. There came the idea to add to our music short stories, board game or a comic book. I remebered my old story and I knew guys would like it as it was inspired by comic books and movies and they agreed to make it part of the art of Uma. We asked Teo Grlica from band Longhare to lector the text and make it more fun and he did an amazing job because he is also a movie and comic freak as we all are but also he is an English teacher. And that was it. We now have a crazy ass story of a demon named Loris where he finds out that someone want’s to destroy Heaven and Hell and make something completely new. What will happen you can read on our official You Tube channel while listening to our music in a video stories by chapters.

You already released 5 singles. How many songs will be included on the new album?
Vinko: At this point we didn’t record all the songs for the album. It’s just these 5 songs that we did but we are now working to finish 5 more so we can get into the studio and finish the album of 10 songs. 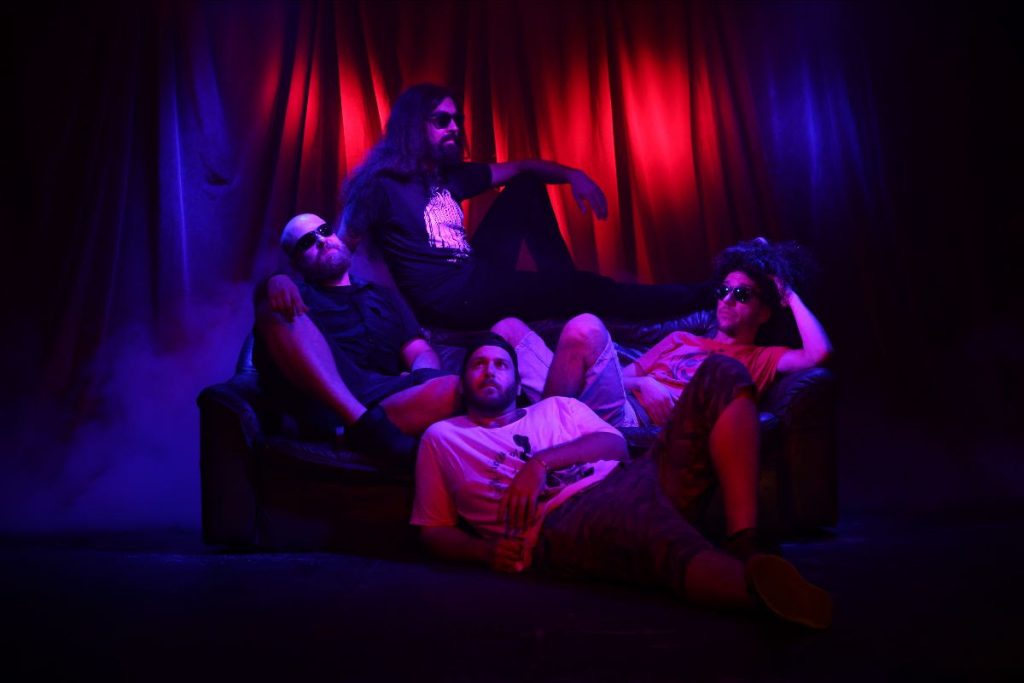 Your new logo and art work was done by the great artist behind the name of All Things Rotten, who has worked with many musicians and well-known bands, such as Amon Amarth, Children Of Bodom, Pain, Mortiis and many others. What can you tell me about this cooperation?
Vinko: I have to say I am a total freak for art and design. From tattoos to video games, comics and art covers. Artists like All Things Rotten for me are gods that can create something amazing and make things come to life on a piece of paper. I worked with him few times before for festivals that I did and I knew he is the right person to bring to life all the ideas and characters from the story that I made. It’s an honor to work with such a great artist and can’t wait to see all of it in our booklet.

You’re also active member of music scene in Rijeka and you participated in numerous of different projects. Can you tell me something more about it? Any interesting future projects?
Vinko: For around 12 years now I am member of Association Ri Rock from Rijeka. I’ve been doing gigs and festivals for over 20 years now. Our association takes care of alternative music culture where we do gigs, festivals, music workshops but also run Radio Roža, Studio Palach, Music Box (rehearsal studio) trough which we help our scene to grow and function. We’ve done tons of shows and different events where one of our main events is Ri Rock Festival. 42 year old festival is under our production for 15 years and it’s the most important festival for young bands and musicians. We also run Dark Circle metal festival for 7 years now. Trough our work we work with young volonteers that can continue our work and make the organisation grow. At the moment we are working on a new project called Ri Rock Academy where we teach people how to rock by playing drums, guitars, bass and vocals and where we have plans for the future to make group classes, teach how to function in the band, how to make tech riders, what are copy rights and other important things that make a good band function.

Rijeka has always been synonym for quality rock music. Can you point out any new artists that you like?
Vinko: Wow, there are a loooot of bands and it’s hard to say few of them that are great but if I have to pick few that are my favs they would be: Speedclaw, Omnivore, Grapevine Babies, Fanaa, The Black Room.

As many of young people in Croatia you also emigrated to Ireland. What have you learned from this experience?
Vinko: Don’t move somewhere alone and mentally fucked up. Hahaha… I love Dublin in summer and spring and I love Irish folk. Very good people. Learned that how much they can be nice they can be also hard and heavy. Love some pubs there. Met a lot of great people from allaround the world.

Anyway, welcome back! Have you been in touch with alternative scene there and what would be the main difference to the scene in Croatia?
Vinko: Thnx. Hmm, this will sound bad but, I have to say that our scene is a bit better. I have seen a lot of bands and picked just few of them that are good. Well I could be wrong but this is what I got from this exepriance, also my guitar player said the same thing. I actually heard an awesome band called Theories Devide that I brought on my festival in Rijeka to play. To bad the band is not playing anymore.

How did COVID-19 lockdown affect you as a band?
Vinko: Our new album should have been out on August but now we stopped working on it and there is no way we will make it on time so we will be happy if it comes out this year. Would be cool to have our third album out on our 10th year anniversary.

When and where would we see Uma live in the future?
Vinko: Oh, I have no idea, to tell u the truth. It’s hard to say. But I hope after the album is done we will travel all over Croatia but also Serbia, Bosnia, Slovenia and some other Slavic lands but most important we will hit Italy as the new underground scene for stoner, grunge, sludge and drone is blooming there.

Thank you very much for your time! Do you have any last words?
Vinko: Thank you for taking notice of our work and wish you all the luck with this project.

Also, would like to thank all the crazy fans out there. We appreciate all the respect they are giving us specially the ones buying our merch, attending our shows and buying our music on Bandcamp. Respect people! We will continue to make you happy with our massive tunes. Cheers! Stay heavy \,,/