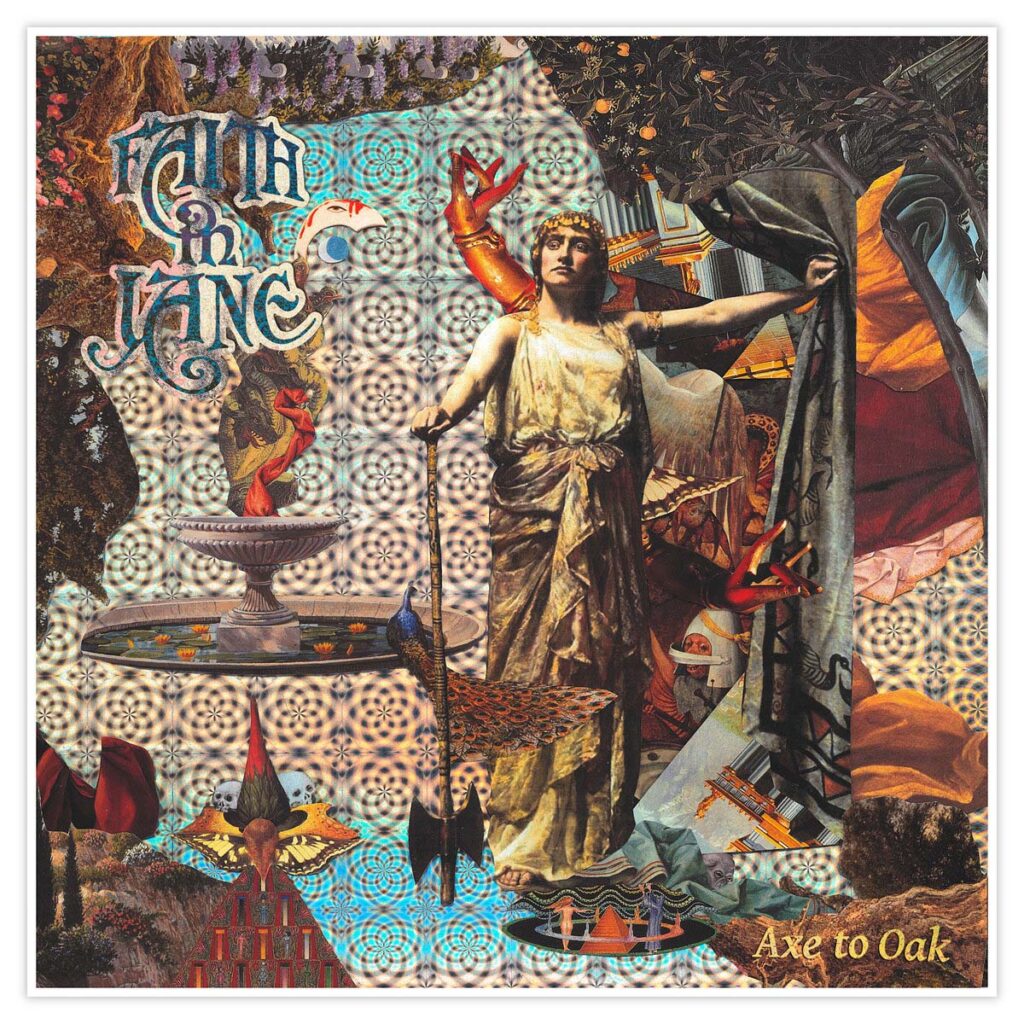 Thurmont, Maryland-based psychedelic rock trio Faith In Jane will release their new full-length album, »Axe To Oak«, through Grimoire Records in October. Alongside the record’s cover art, track listing, pre-orders, and more, The Obelisk is hosting a premiere of the lead single, »Enter Her Light«.

An incredibly prolific band, »Axe To Oak« serves as Faith In Jane’s eighth studio album in their ten years as a band, the record delivering a uniquely ‘90s grunge element in their psych rock vibes. Packing seven extensive tracks into a dense forty-minute excursion, »Axe To Oak« was engineered by Greg Diener in July 2021, mixed and mastered by Grimoire Records’ Noel Mueller at Tiny Castle in June 2022, and competed with artwork by Austyn Sullivan and layout by Mueller.

With the album’s first single, »Enter Her Light«, the band’s Dan Mize reveals, “This song is loosely based around the demon Lilith in Judaic mythology. We bridged it together with ‘She Moved Through The Fair,’ a traditional Irish ballad. The dark marriage between the two came about as a one-off idea for a show but it ended up sounding so natural and powerful, we had to record them together.”

The Obelisk writes with the song’s premiere, “Faith In Jane’s songs come alive here, in terms of they-play-in-studio-like-on-stage energy – which is both a cliché and true – their duly organic communion with natural elements and in the flourish of the interplay between Mize, Winston and Llewellyn, and the material itself reaps the rewards of the years that have gone into its making.”

»Axe To Oak« will be released digitally and on limited edition CD via Grimoire Records on October 7th. Find preorders HERE.

Stand by for additional previews of the album to be issued over the weeks ahead. 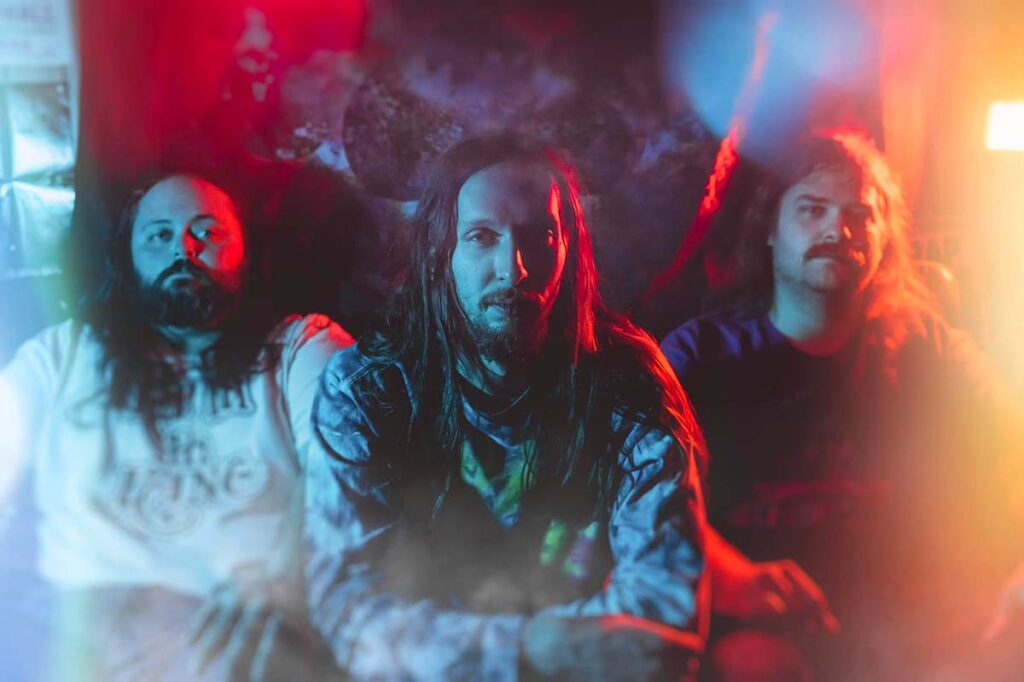 Faith In Jane will support the release of »Axe To Oak« with a run of East Coast tour dates which are currently being booked for October. In the meantime, the band has confirmed a local gig on August 26th to celebrate the new vinyl release of their prior LP, »Mother To Earth«. Watch for new tour dates to be issued shortly.

Faith In Jane was formed in 2008 by Dan Mize (guitar/vocals/lyrics), Brendan Winston (bass), and Alex Llewellyn (drums), who remain as the current lineup. The band has made a name for themselves in the Maryland rock/metal underground with their electrifying live shows and a prolific discography. Playing with bands such as Corrosion Of Conformity, The Obsessed, Eyehategod, Trouble, Conan, Captain Beyond, Earthride, Beelzefuzz, Pale Divine, and Caustic Casanova, their reputation has been steadily growing since they first arrived on the Maryland doom metal scene in 2012, where they are five-time veterans of the Maryland Doom Fest. The Obelisk has described them as “Maryland’s best-kept secret in heavy rock,” and Doom Charts calls them, “One of the most underestimated trios of proficiently skilled musicians out there.”

Beginning as a punk rock band with a reggae influence, Faith In Jane rediscovered their love for Black Sabbath and over time brought in more psychedelic and progressive elements to their sound, embracing improvisation as they soaked up the influence of bands such as King Crimson and Grateful Dead, as well as jazz legends John Coltrane and Miles Davis. Starting with 2016’s »Rhythm Of Elevation«, and further developing with 2018’s »Countryside«, they would balance their heavy psychedelia with a southern rock influence, heavily inspired by Lynyrd Skynyrd, as well as a more personal and introspective songwriting style. This would continue with 2020’s »Mother To Earth«, which features more compact songs that are catchier, yet still heavy and trippy. 2020 also saw the release of »Trippin After Supper, Volumes 1-4«, an “official bootleg” series that focuses on their extended improvisations, showing a different side of the band.

Faith In Jane newest album »Axe To Oak« features some of the tightest songs they have recorded so far, the product of two years spent refining unrecorded material and writing brand new songs; so many, in fact, that several songs recorded during the sessions have been set aside for future release. Their songwriting is more focused than ever, placing stronger emphasis on the vocals and lyrics while continuing to develop their trademark heavy rock sound, which Desert Rock Psychlist has called, “a sound so far beyond good they haven’t even invented a name for it yet.”

Menacing yet swinging riffs balance dread and boogie in the best Black Sabbath tradition; the rumbling bass groove that carries the songs has been enhanced by a fresh layer of fuzz; and bluesy, whiskey-soaked leads soar over everything like an eagle flying over their native Appalachians. The unexpected inclusion of the traditional Irish ballad “She Moved Through The Fair” shows yet another of their diverse musical influences. The juxtaposition of Mize’s delivery of its ancient love-and-death melody with the wash of shimmering guitar, bass and trembling cymbals is spine-chilling, and it flows seamlessly into the original »Enter Her Light«.

The whole package is enhanced by their best production work to date, courtesy of Greg Diener (Pale Divine, Beelzefuzz) and Noel Mueller (Grimoire Records). With the release of »Axe To Oak«, Faith In Jane plans to continue playing shows in support of the album- they’ve made short runs through the southeast and mid-Atlantic states, as well as journeys to New York and New England, and are looking to spread their music and message to all lovers of rock and metal.