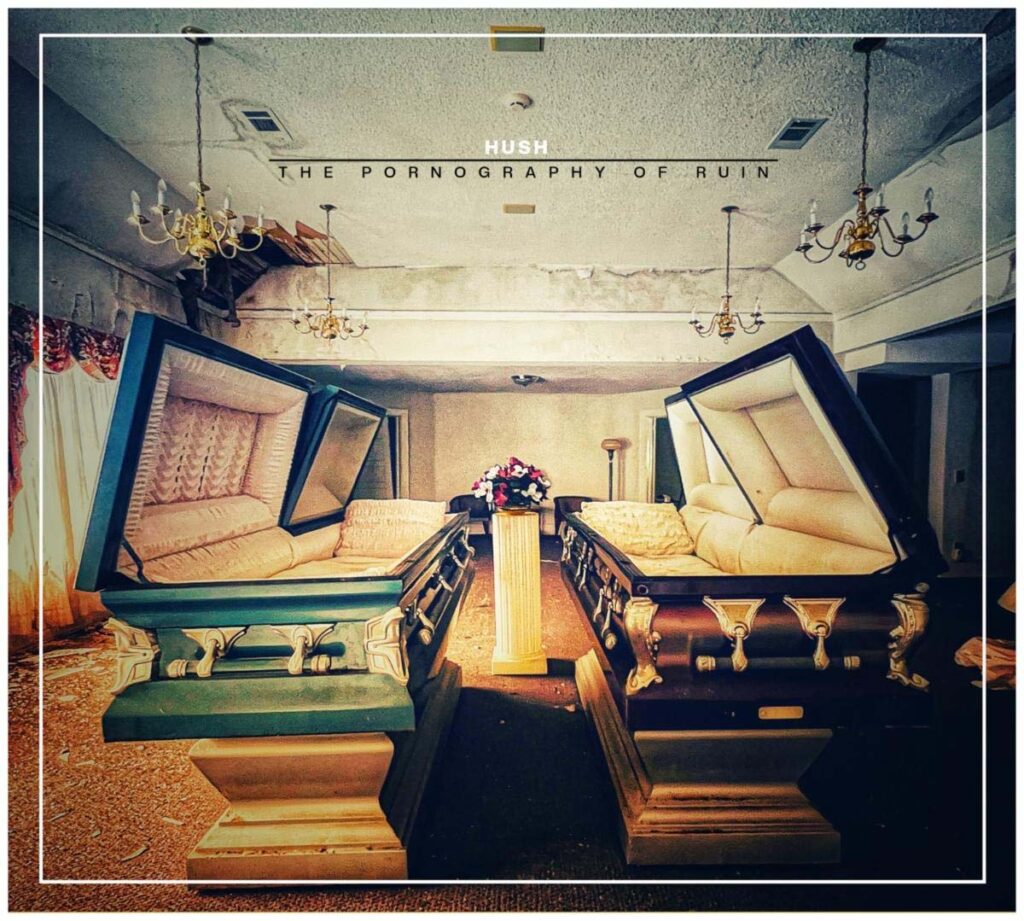 Hudson, New York based sludge/crust outfit Hush premiere a music video for the first single »There Can Be No Forgiveness Without The Shedding Of Blood« taken from their upcoming album, »The Pornography Of Ruin«, which will be released on June 24th, 2022 with cassette edition coming via Sludgelord Records.

Tracklist:
01. I Am Without Heaven And A Law Unto Myself
02. Above Your Head They Close Like Giant Wings
03. There Can Be No Forgiveness Without The Shedding Of Blood
04. …By This Are You Truly Known
05. And The Love Of Possession Is A Disease With Them
06. The Sound Of Kindness In The Voice
07. At Night We Dreamed Of Those We Were Stolen From

Upstate New York crust/sludge metal outfit Hush prepares for the June release of their third full-length release, »The Pornography Of Ruin«. Today, the first single from the LP has been issued through an intense and imaginative video for the song »There Can Be No Forgiveness Without The Shedding Of Blood«, which makes its debut through an exclusive premiere hosted by Decibel Magazine.

»The Pornography Of Ruin« was engineered at Hush’s studio, HOVVL Audio Environment in Hudson, New York, by frequent collaborator Ryan Slowey, and was mastered by Jack Shirley at Atomic Garden in Oakland, California. The cover was created with photography by an urban explorer Adrian Ledezma and design by the band’s vocalist Charles Hush.

The video for »There Can Be No Forgiveness Without The Shedding Of Blood« was filmed and directed by Hush drummer Mark O’Brien and features band members Jason Tash as the protagonist and Jordan Cozza as a dark figure that pursues him. It was filmed on the grounds of the band’s studio on an intensely cold day in January 2022, with only the members of the band involved in the production, continuing the band’s commitment to the DIY ethos.

O’Brien states, “The look and feel of the video was important to us – I wanted to represent the lack of detail in the world and your surroundings when you are trapped in a self-destructive loop. That state of mind isolates you to a point where the there’s just you and the most basic and unavoidable experiential aspects of the world available to you and everything is reduced to rudimentary shapes without color or sharpness. The only details you can focus on are in the objects you use to further the spiral. I think that we were able to communicate that feeling through the aesthetic of the video.” 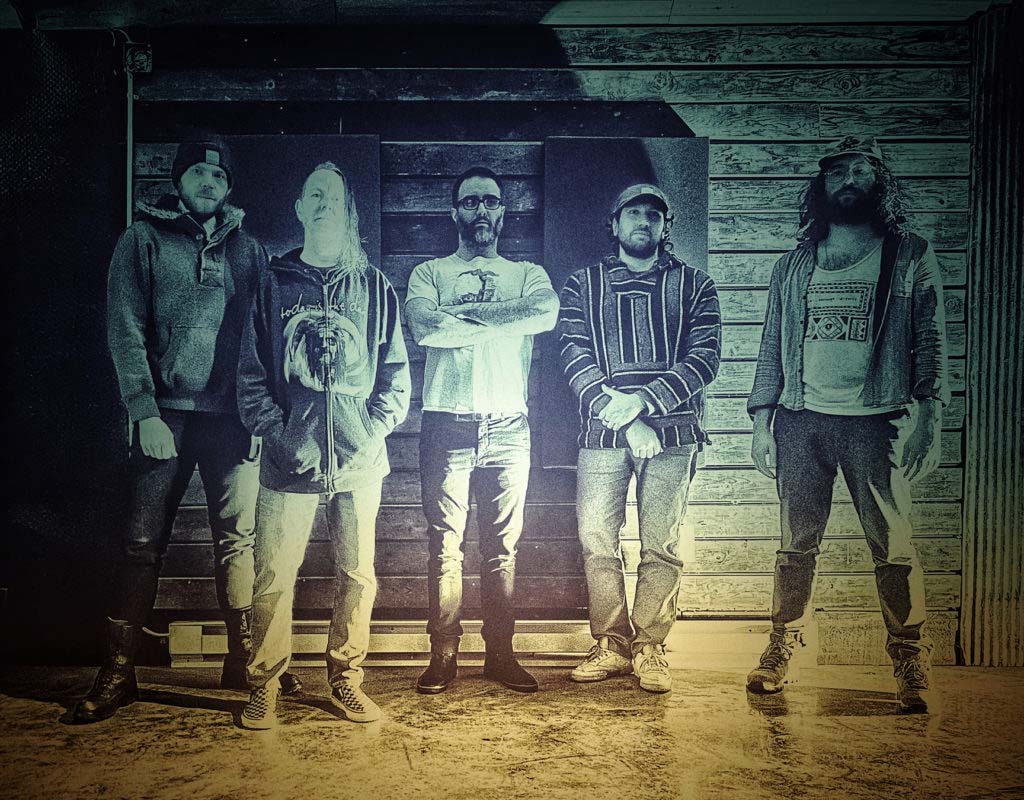 Charles Cure reveals, “Lyrically, the song portrays the mental and emotional landscape of depression. It is an extremely solitary and isolating experience that traps the individual inside an echo chamber of self-reinforcing hopelessness. The narrative of the video presents this concept as the individual being pursued by another version of themselves that is passively encouraging the steps they take to actualize their own destruction. In the final moment of the video when the figure in black shows itself to be the same person who has just been burned alive, the cyclical nature of depression reveals itself, but also presents the possibility that the struggle with it can be turned into an opportunity for transformation of the self. Mark and I discussed and conceptualized this a lot before filming, and I think he did an amazing job translating the ideas into a visual medium.”

Decibel writes with the video’s premiere, “Bleak… The stark, blown-out black and white cinematography only accentuates the very dramatic content of visual images. Dude self-flagellates; dude bashes his head into the ground; dude sets himself on fire. It ain’t pretty or uplifting, and that’s no doubt the intent. Hush’s noisy, sludgy, post-metal horror-show provide the appropriate soundtrack for said bleakness.”

»The Pornography Of Ruin« will see release on June 24th, released digitally and on CD by the band, on cassette via Sludgelord Records, with plans for a vinyl release to follow. Find current pre-order options HERE and watch for vinyl updates over the coming months.

Hush has booked their first live shows since 2018 in support of the LP. The day of the album’s release, the band will head out on a five-city run of East Coast shows, June 24th through 28th, alongside their friends in Cowardice. They’ve also booked their first local show in several years, in Catskill, New York July 8th. Watch for additional dates to be posted throughout the months ahead.

Hush is formed by veterans of indie and underground bands including former members of From Ashes Rise, Self Defense Family, Aficionado, Endicott, and others. »The Pornography Of Ruin« showcases a more expanded view of their established sound by embracing more melodic elements, intense dynamic shifts, and previously unexplored vocal and atmospheric textures within each composition. Thematically, the record focuses on the concept of personal destruction and transformation; drawing heavily from vocalist/lyricist Charles Cure’s experiences in the aftermath of a 2016 car accident that left him hospitalized and unable to walk for several months.

After muscling their way onto the scene in 2014, Hush has since issued albums through the likes of Dullest Records, Silent Pendulum Records, Fuzz Records, Sludgelord Records, as well as independent releases and more. In the years since their most recent album, »Untitled II«, the band has endured several lineup shifts that resulted in limited live outings, but the group remained focused on producing a follow-up record that would surpass their previous efforts on every front. To accomplish this, founding member Jordan Cozza built a recording studio in a barn in Hudson, New York and the group began shaping songs that would refine and encapsulate the ideas they had been pursuing since their inception. The result of these labors is the 2022 LP, »The Pornography Of Ruin«.