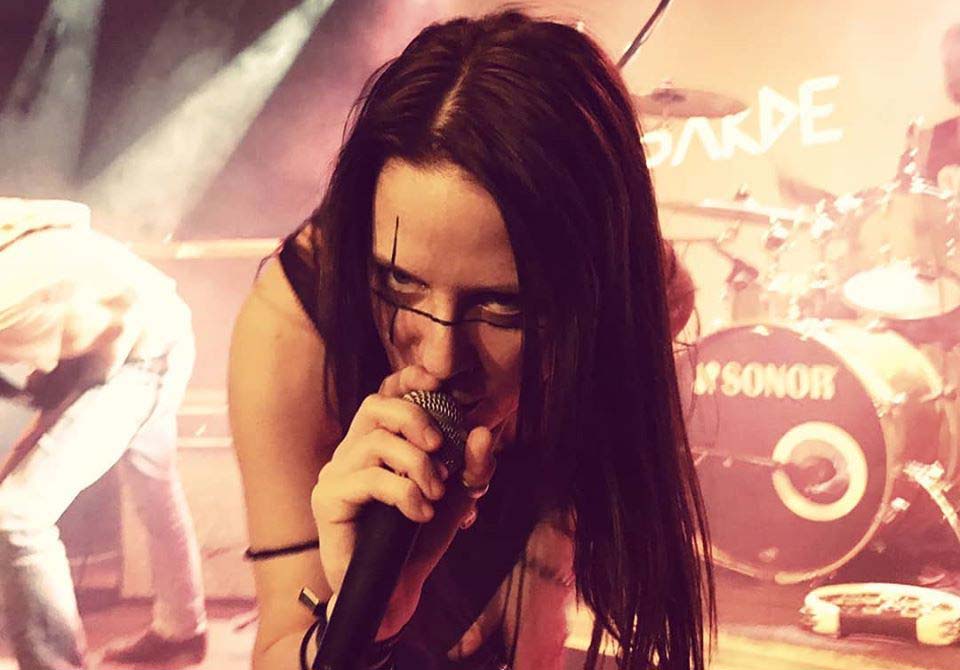 A dramatic voice, an earthquaking tune and the bittersweet aftertaste of a heroic beat. Love, passion, fire. These are the weapons they use to fight. Vu Garde! Ready for the stab? Follow them on the journey from the deepest deserts to the sacred sites of voodoo priests and witches, dark woods and places for fairy creatures. The human experience from the psychedelic site of the mind through pleasure, pain, darkness, light, hope, fear, sex, sticky situations and the lightly dancing flower kind of being.

Vu Garde consists of guitarist Sven Kofler, drummer Stephan Winzely and lead singer Melanie Köstinger who was so kind to answer my questions.

Can you first explain me your name? What Vu Garde stands for?
Mela: Our name “Vu Garde” has in fact not one meaning in particular. It means a lot of things. And everyone can choose his own version. We like the comparison with the french fencing term which means to be warned and to hold up your guard. We have three swords in our logo as well. It represents that we are the three fighters (love, passion, fire), like the original musketeers. We stand for one and one for all. But we also wanted to have a little voodoo and witchcraft thing in it, so the “Vu” was quite fitting. 😀 But honestly the name just came to us a bit like an accident. ^^

You perform as three piece without bass player. Was this your conscious decision or it happened by accident?
Mela: As mentioned it clicked so well between us that we were afraid to ruin that flow and energy with another member. And we realized that it would be quite offbeat to have a stoner band without a bass player and we wanted to stir things a little bit up and thought it was a cool way to go on a new or different path with that.

As I noticed you were in a band before Vu Garde. How would you compare these two experiences?
Mela: Yes, I was in a band called Steamy Van. (The name was also from my incredible brain haha 😀 ) It was a project that doesn’t exist anymore. It was my first experience with a band and with singing as well. Unfortunately the members of this project had all different ideas what the band should represent, so we split after one year and a few really good blues rock songs. The biggest difference between Steamy Van and Vu Garde is of course that Steamy Van had a bass player (an incredible one) and that we in Vu Garde get along much better than I experienced it in my first band.

Your guitarist Sven is a real animal on the stage, adding some “redneck” flavour to your music that gets me kinda Zakk Wylde feel…
Mela: Yes, Sven is the beast! 😀 We like these Zakk Wylde vibes from him too! He is totally aware of that! 😀

What are your main music influences? It seems to be quite wide spectre of anything that rocks…
Mela: Yes, our influences range from the good old blues, 70s hard rock over psychedelic rock to doom metal, sludge and of course stoner and grunge. We all three are listening to quite different stuff but that’s the mix which makes our style.

How do you write your music?
Mela: We are writing our music mostly in our rehearsal room by jamming and having fun. We don’t have one writer in the band. It all happens when we are together and in the flow.

Are lyrics important part of your songs?
Mela: Lyrics are more important to us than to some other stoner bands I guess. But not that important that you have to understand every single intention of every song. The lyrics are very poetic and metaphorical.

Would you reveal me what your lyrics are about?
Mela: My lyrics are mostly my own and other peoples experiences with things like sex, love, abuse, freedom, peace and passion as well as fever dreams and things which are fucking up our minds from time to time. 😀 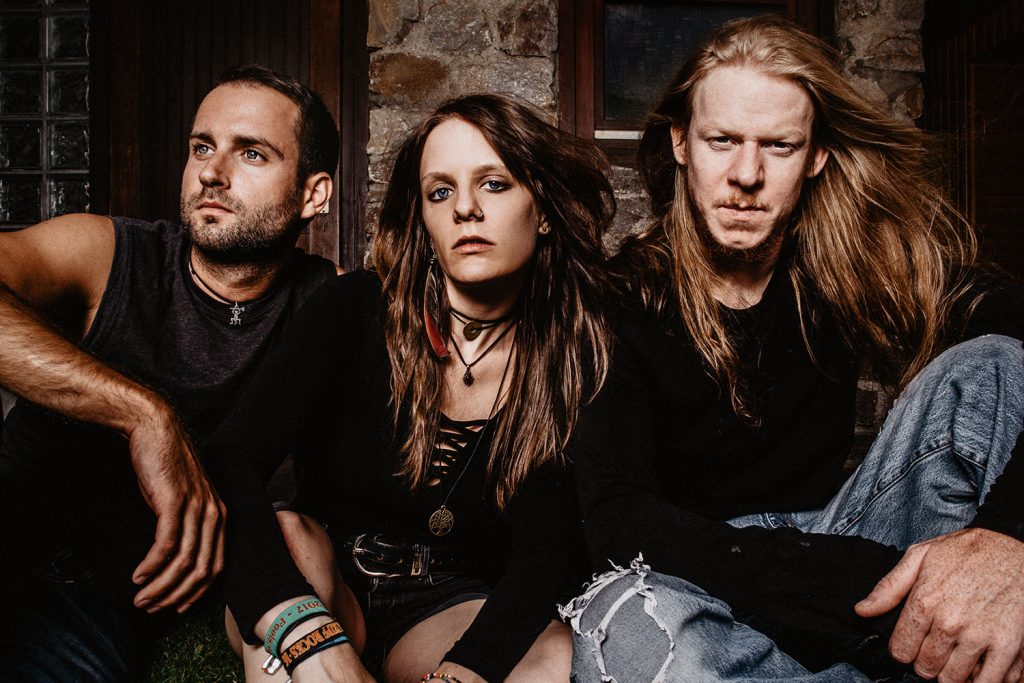 Your self-titled debut was released in July last year. How the people reacted to your first release?
Mela: People were quite impressed. Especially our parents and friends haha. We mostly got good feedback. Btw we’re releasing it on vinyl this fall.

Are you satisfied with the production? For me it doesn’t quite capture the whole energy of your live performences, because your shows are really amazing and wild.
Mela: We are satisfied for it is our first thing out. But sure we want to go further and try other things on the next record to show what we are really able to do. We are not sad about the fact that people say that you have to go to a show to feel our whole spectrum of energy. We are a straight up live band and not only an audio but an audio-visual experience! 😀

You told me that every member also has their own role behind the band. Can you tell me how you split the work?
Mela: Yes, everyone of us has his tasks to do. Stephan is the organizer and deals with all the juridical things. Sven is booking our gigs and I am the media agent. I am giving the interviews and post our content on Facebook and Instagram.

Sven also said that you’re doing everything by yourselves, without any record labels and stuff. Are you going to continue in DIY style?
Mela: That is a difficult question. Time will show I guess. Our DIY style gives us a lot of freedom. But it’s also a lot of work and I think we would reach more people with a label behind us. An independent label who would give us the same amount of freedom would be very cool but is also hard to find.

Bands with female singers became a huge trend in the last years. But still, there are not so many women into stoner/doom scene. What do you think?
Mela: That’s true. I’m happy to see more and more women in the scene. But you’re right these are mostly singers. I’d love to see more bad ass girls behind the drums/guitar/bass etc… I think the scene is open and ready for that. 😀

Was being “smart and pretty” advantage or obstacle for you as a frontwoman? Do you have to deal with sexism a lot?
Mela: I’m glad to say that this was never an issue in my experience in the scene or with fellow musicians. I feel respected and valued as well as my band members everywhere we play and in the scene in particular. I once had a sexism problem with a photographer who commented the pics he made of me with sexual stuff. But that was only one rotten egg and don’t represents the scene as a whole.

You have been playing quite a lot shows in the past year or so. Could you share some of your favorite memories?
Mela: Oh yes, we had a lot of fun playing the last two years. 😀 My favorite memories were meeting my heroes from The Picturebooks, The Vintage Caravan, OM, Windhand and of course the amazing Church Of Misery and EyeHateGod and playing the festivals together. One thing I will never forget was the moment the members of the headliners Church Of Misery were filming our whole set and came to me after it and said how great our show was and that I have a great voice. That was like an accolade for me. 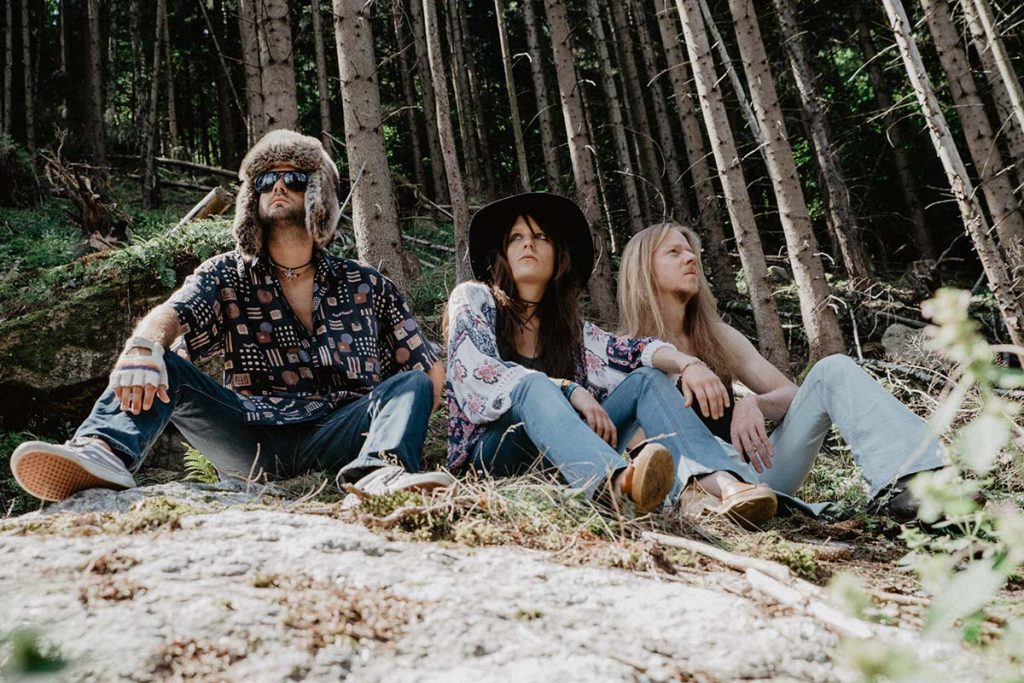 Have you already supported some bigger artists?
Mela: No we haven’t supported such big acts like Vintage Caravan or The Picturebooks for example yet. We hope that this will change and that we have the opportunity to do that one time. We supported Slowtorch from Italy a few times.

You also played your first show in Slovenia last year. How do you like it here, on the “sunny side” of the Alps?
Mela: We like Slovenia so much, dude! The scene is so much bigger and better than here in Austria or Carinthia in particular. The people there are much more open to our kind of music and are really supportive and nice. We feel very comfortable there.

What was the most extraordinary experience with your band so far?
Mela: I don’t know what is extraordinary for a band? 😀 We were on the road a lot and met really cool and crazy people. Once we were booked for a biker party and we got a bit scared if we could meet the expectations of the people there. Turned out that they loved us and we gave autographs on our merch for the first time. Man, we felt fame! Haha!

Can you tell me a little more about the music scene in Carinthia? It seems like a few years ago there were much more bands, shows and festivals or am I wrong?
Mela: Yes, you’re right. At least the rock scene in Carinthia is really shrinking and festivals do not find the right place and enough people to hold it up. The good musicians are nearly all going to Graz or Vienna so that we are here almost alone on the boat.

How did Covid-19 lockdown affect you as a band?
Mela: Of course Covid-19 affected us with nearly all our booked shows for spring and summer 2020 were cancelled. No festivals and no playing outside of Carinthia. But we’re still playing shows in Klagenfurt and hope that people here would finally recognize us and give us more credit what other countries already did haha. 😀

What are your plans for the future?
Mela: Our plans are shooting music videos from one or two songs of our first album. And of course writing and recording our second album and hopefully playing shows in Germany in the future.

Can you point out some other Austrian artists that you like and support?
Mela: Of course! I really love Dusk from Vienna. We played together a few times and really love and support each other. Further I have to mention Mother’s Cake from Tyrol. I know this band since 2014. I saw them live on a festival and that was the moment I decided to join a band on my own. They really inspired me to do something musical and I am still a huge fan of them.

You just mentioned that you’re releasing your first album on vinyl soon. Are you also a vinyl freak yourself?
Mela: Yes, I am a huge fan of vinyl and also a big collector. I also worked in the local record store in Klagenfurt for 5 years till 2018. In that time I had access to really cool, old and rare stuff.

What are the most precious vinyls that you own?
Mela: I’m very proud of my Krautrock collection. I own originals from the 70s bands like Frumpy, Jane, Guru Guru and Amon Düül II.

And what music is currently on your playlist?
Mela: Oh yeah, I love that question! 😀 Currently I listen to a lot of grunge from the 90s like Silverchair, Soundgarden and Alice In Chains. But my classics like Dopethrone, 1000 Mods and Kyuss are also always in the mix. I think now it’s time for some more bluesier stuff again like Radio Moscow or All Them Witches 😀

Thank you for the interview! Vielen Dank 😉 Any last words?
Thanks for your support and hope to see you again anytime soon!!!