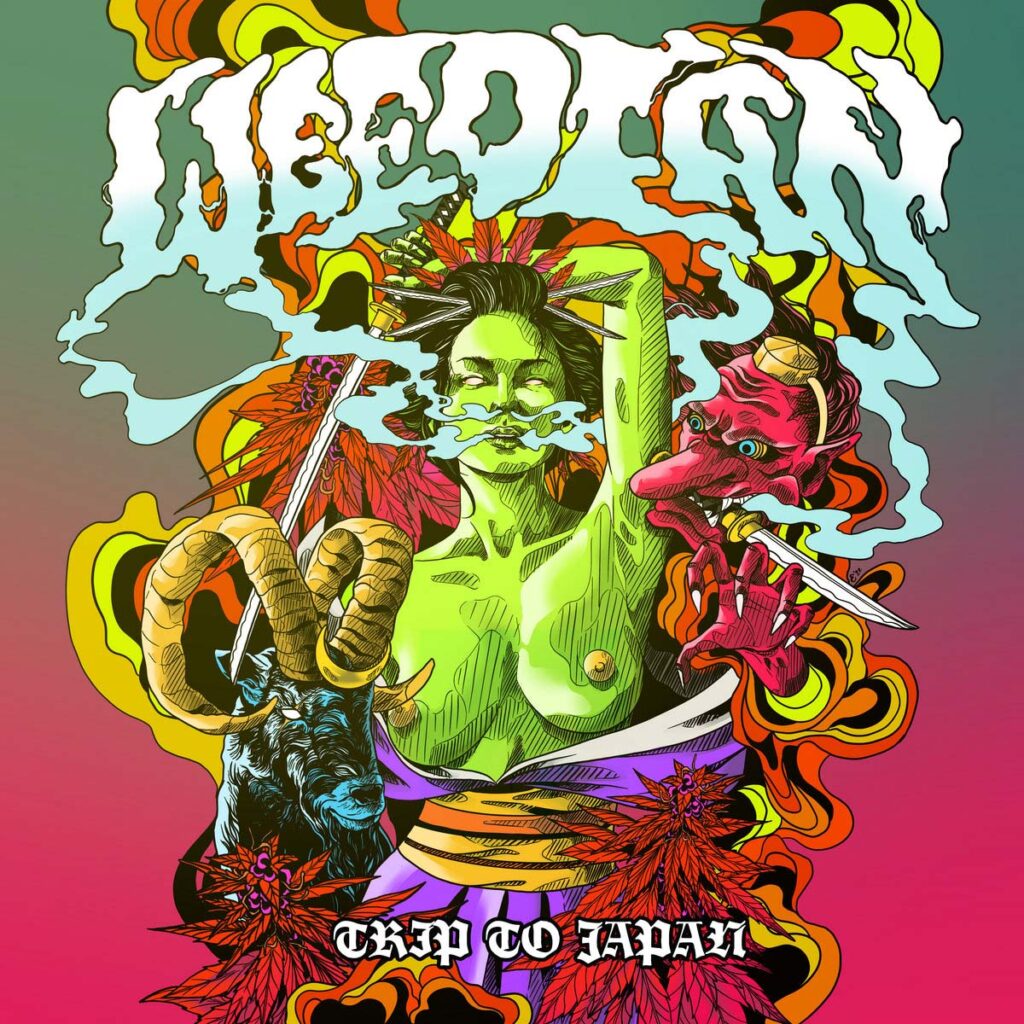 After six months in the making, Weedian finally had a chance to share their brand new compilation »Trip To Japan« including 40 killer tracks that showcase the incredible diversity of the Japanese stoner/doom/sludge/psych scene. Featuring Church Of Misery, Eternal Elysium, Greenmachine, Sonic Flower, Hebi Katana, Bastahaze and many many more.

Doom, a keyword that no one here in Japan had ever heard of until Rise Above Records released the »Dark Passages« compilation in 1991. I had seen the word only a short time before in the margins of some fanzine article, but that was only because I was always looking for the right word for pioneers such as Saint Vitus, Trouble, and Pentagram, usually in small fonts that it were easily overlooked.

Then, Cathedral’s debut made a small splash here. Since that time, we started calling the music created by bands like Trouble, and Candlemass, which emphasized deep, slow beats and lyrical melodies that we love, “Doom Metal”. It was limited to the underground, though.

It’s presumptuous of me to talk about myself, but my band, Eternal Elysium, was formed in 1991. At first I thought that no one in Japan knew what “Doom Metal” was, except me. Most of the musicians around me at the time didn’t even care about Black Sabbath, so absolutely no one was interested in playing Doom.

The first musician who called my band’s sound doom was Tatsu, just before he formed Church of Misery. He made it clear to me that he wanted to start a Doom band separate from the metal band he was playing in then. This was my first meeting with someone who truly loved doom. As far as we knew, there were no other active Doom bands in Japan at that time.

Since the late 90’s, we doom/stoner/psychedelic bands have been expanding our activities overseas. Church Of Misery are roaring their king of doom sound world wide, and with a great deal from Rise Above, has become successful in the world scene, as you know. Eternal Elysium also began to journey to the US and other countries, releasing albums from Meteor City and some other labels worldwide, and continues pursuing the possibilities of doom music.

We may have been pioneers of Doom after this word appeared, but I don’t know if we were the founders. In the 80’s, I already knew a band playing traditional doom metal. That was Genocide Nippon, who is also on this album. They had established a twin-guitar doom metal sound by the time they put out their demo (’83).

Further back to the roots, Flower Travellin’ Band’s »Satori« and Blues Creation’s »Demon & Eleven Children« had doom sensibilities in the early 70’s without hiding the influence of Black Sabbath. Speed, Glue & Shinki played heavy blues with openly dope and stoner tastes. Their predecessor bands were active in the scene/movement called “Group Sounds (GS)”. The GS community was under the influence of Japanese Pop culture and on major distribution as a business using the western psychedelic taste of its time. Most of the bands played for decent teenagers, and decent, straight-laced fans didn’t feel what psychedelic was. However some important bands and musicians who emerged from this scene were different. Flowers, Jacks, Golden Cups, The Dynamites, and other great bands probably sublimated the psychedelic experience into their sounds in the late 60’s. These real bands are kind of originators to connect to the first generation of Japanese psychedelic, blues, hard rock, progressive, jam bands, and more.

J.A. Seazer brought heavy rock flavor to the theater, weaving in avant-garde expressions. Some songs from hard rock legend Carmen Maki & Oz had slow and heavy riffs. Far Out played a downer and Zen-influenced sound. April Fool, Foodbrain, Too Much, Helpless Soul, Ranmado, and other bands who would later become part of the Japanese heavy rock lineage produced a small but important body of work.

Most of these bands had broken up or changed direction by the mid ’70s, but re-evaluation of their past works began around the time of being reissued on CD.

Since the 70’s, Les Rallizes Denudes have been pursuing their own specific psychedelic path. This psychedelic lineage connects to bands like Katsurei, Acid Mothers Temple, Yurayura Teikoku, Rovo, Hibushibire, Blasting Rod and so many more.

It’s no secret that Kikagakumoyo’s beautiful performances and oriental air have brought them success in recent years. This direction is becoming more prevalent among young domestic groups.

Not to forget the two bands Subvert Blaze and Hanadensha from the mid-late 80s, both of which released albums on Alchemy Records – a psychedelic/noise label that emerged in Osaka. Subvert Blaze carried the scent of 70’s through that period with a Sabbath-esque sound, and waist-length hair and bell-bottom looks while Hanadensha transformed from a punkish rock band into completely tripped out sound-scape producers.

I first heard the term “Stoner Rock” in the mid-90s, when the desert rock sound of Kyuss, Fu Manchu, and others was imported. I was impressed and absolutely fell in love with it. Greenmachine combined the textures of Hardcore and Kyuss, and released their “Hardcore-Rock” sound on Man’s Ruin. Since then, they continue to be active through several hiatuses.

In addition, Boris and Corrupted should totally be mentioned. Both bands have pretty strong sludge/stoner/doom/psychedelic flavors, but Boris, in particular, keeps expanding their sonic possibilities and other activities more and more, achieving worldwide recognition. Corrupted professes not to have a specific genre in mind since they started their career, but it’s kind of a miracle that the ultimate bass-heavy tones and lamentable view similar to Earth, and Sunn O))) developed on its own in this island nation.

We should not forget about Ningenisu. I found them on a TV program in 1989. I was so surprised because I didn’t expect a sound of the likes of Sabbath, or Budgie would ever be put out from the cheap speaker of a TV again. They wore some kinds of traditional kimono and cartoon character costumes, and played heavy rock mixed with Tsugaru dialect singing and traditional Japanese melodies. It was already doom rock before the word doom had come. Their existence was often misunderstood because they were welcomed mainly just in in the subculture scene, but they kept creating albums almost every year even after being dropped from a major label. After more than 30 years of their history, they finally performed overseas for first time, just before the pandemic.

From the Japanese scene in the 90’s, which was completely barren of doom/stoner music, overseas tours by Japanese bands with this outlook are now not unusual. Even as I write this, Dhidalah is wowing crowds in Europe.

Most of the bands on this compilation are active, but the Japanese doom/stoner/psychedelic scene is still small, however it definitely exists and is still improving. There aren’t many, but young talents are increasing. I hope this release will bring more attention to Japanese heavy rock and culture.

Finally, I want to say thanks to all the fans, labels, related people, and everyone who keeps supporting doom/stoner/psychedelic music and this community. Music has a magical power to break down language barriers and allow us to communicate with each other. I know this from my long experiences everywhere I’ve been.