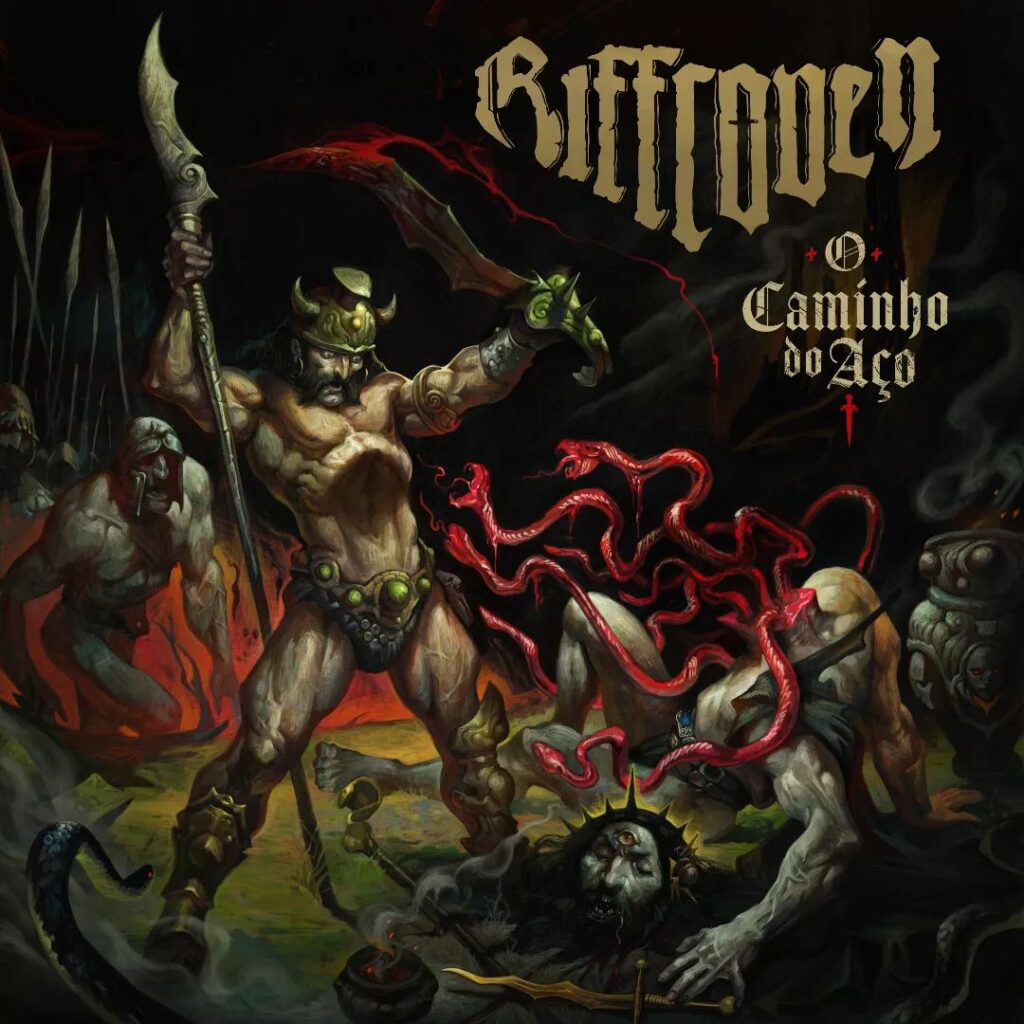 Brazilian doom metal trio Riffcoven has announced a release date for their new single, »Lamento de Ur«, which will be available on January 20th, 2023 on all digital platforms.

»Lamento de Ur« is the first single taken from the band’s upcoming album, »O Caminho do Aço«, set to release on February 27th, 2023 via Cospe Fogo Gravações.

“Hail! The first single from the New Album, »O Caminho do Aço«, already has a release date: January 20th, all digital platforms will receive »Lamento de Ur«!

Just like the album that will be released in February by Cospe Fogo Gravações, this song is entirely in Portuguese, bringing avalanches of riffs and obscure themes based on tales, myths and fiction. More projects are on the way thanks to the partnership with Macabro Design.

»O Caminho do Aço« was recorded, mixed and mastered at Estúdio Eguchi by Alexandre Chapola and has a cover illustration by Gustavo Rodrigues Pelissari.” 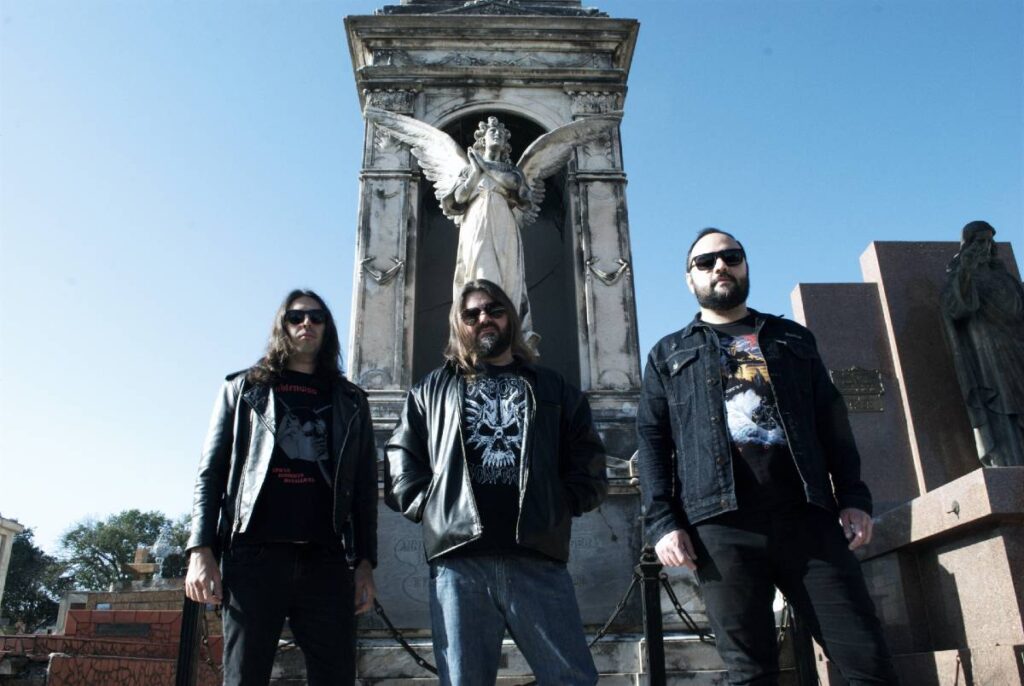 “What do I know of cultured ways, the gilt, the craft and the lie? I, who was born in a naked land and bred in the open sky. The subtle tongue, the sophist guile, they fail when the broadswords sing; Rush in and die, dogs – I was a man before I was a king.” The Road of Kings – Robert E. Howard

Between fire, blood and steel, humanity traces it’s path leaving trails of destruction. Civilizations evolve through wars and plagues, only to be subdued by even more violent ones.

Barbarism is the natural state of men, and always return sovereign…

In the midst of this death spiral, magic challenges the reason of those who don’t understand how this world is old and populated by beings that watch us from darkness.

Now that you understood where you are, trust your most savage instincts, because there’s only one way… »O Caminho do Aço« (The Way of Steel).

Riffcoven returns to the battlefield with another release through Cospe Fogo Gravações label.

Bringing to the Brazilian doom metal scene an audacious record, totally in portuguese and with the weight of a war elephant, the band presents »O Caminho do Aço«. There are 7 compositions that challenge the listener to walk through a violent world full of myths, science fiction and fantastic literature.

Recorded, mixed and mastered by Alexandre Chapola from Eguchi Estúdio, based in Jundiaí/SP, this new album brings the main characteristics of Riffcoven, with a notable evolution.

The mixture of styles and influences, brutal passages and mysterious ambiences set the tone for the stories told in each track. Even in purely instrumental moments we feel a force that pushes us towards adventure and the unknown.

A conceptual work totally in portuguese wouldn’t be complete without a brazilian artist illustrating the cover art. The master of fantastic arts Gustavo Pelissari not only captured the proposal but also took advantage of all the influences in common with the band to create a work that refers to the classic covers of comics and RPG books. On the shoulders of great masters such as Frazetta, Vallejo and Buscema, the illustration of »O Caminho do Aço« gives a taste of what the brave male and female warriors will face in the next 50 minutes.

Riffcoven is a doom/stoner metal band founded in the second half of 2016 by Rev. Bodefuzz (André Luiz Martins) and Old One (Paulo Fornazza) with the intention of playing heavy music. At the meeting point of their musical influences and preferred lyrical themes, the band developed their characteristic sound and, in the beginning of 2018, released their first work »Crown Of Darkness«, very well received by the public and specialized media.

After their first release, the band received Lord Python (Andrea Z.) as their bassist and started playing a row of concerts through the interior and capital of the State of São Paulo, as well as a few concerts in Santa Catarina. 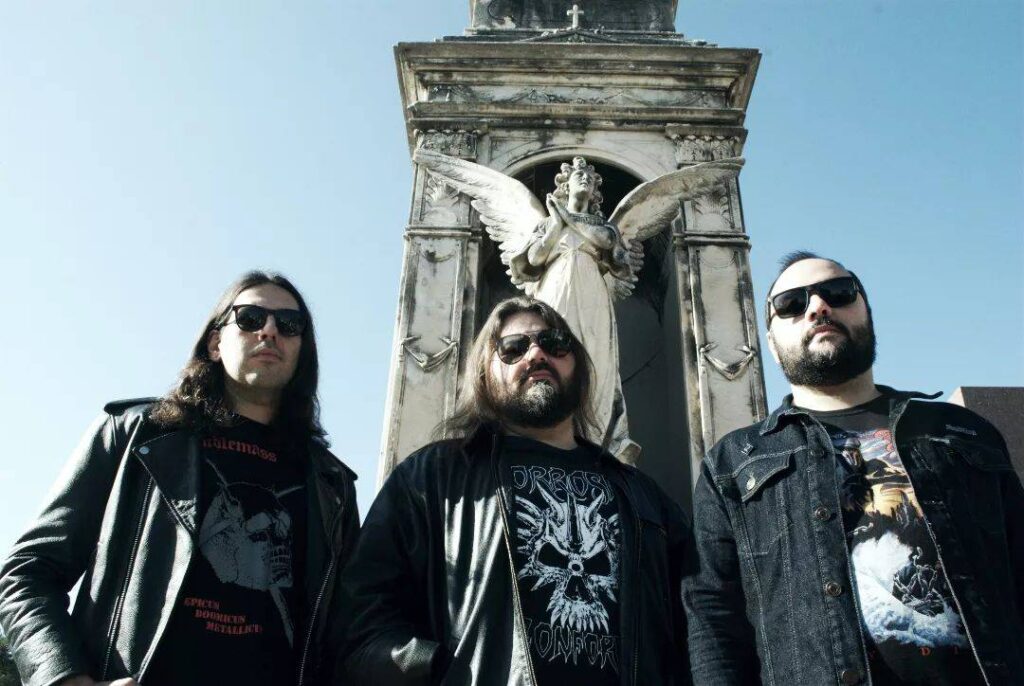 By the half of 2019 the band released their EP »Cursed«, highlighting their single »Feiticeiros do Riff«, by the label Abraxas Records and, in sequence, a live record »Raw«. With the pandemic situation, many concerts were cancelled, including some outside of the band’s State, and they started the composition of their third new record. The band also released in 2020 another live record, »Raw 2«, from a concert made at the end of 2019 in the capital of São Paulo.

Lord Python left the band at the end of 2021 and was substituted by Baron Graves (Rafael Riberti) at the beginning of 2022. With this new line-up, the band finished the recordings of the EP »Never Sleep At Night« and the album »O Caminho do Aço«, also making several concerts in São Paulo and outside of the State.