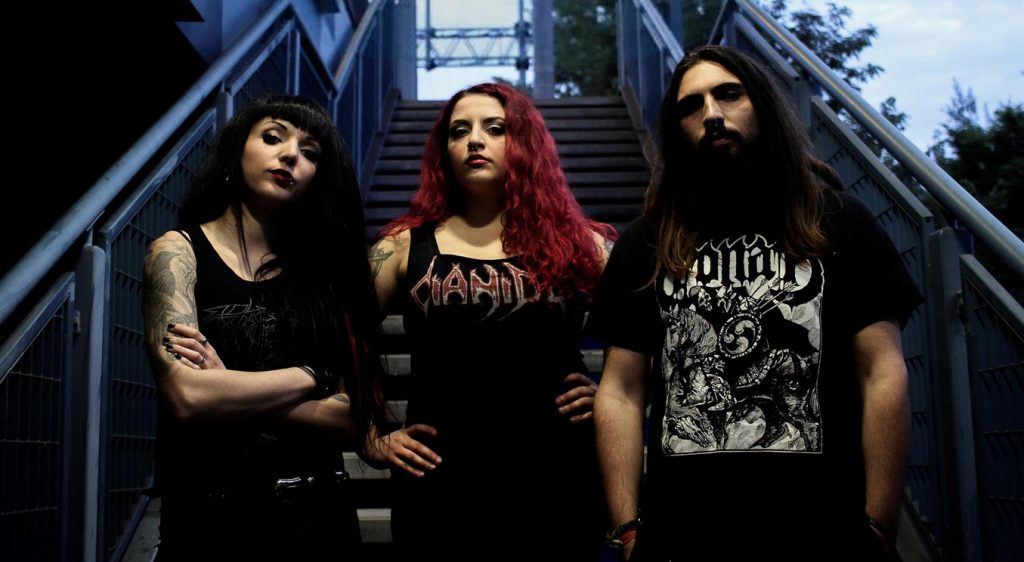 The first regurgitation of Ferum was in 2017, when Angelica (drums) and Samantha (guitar and vocals) decided to start the band with the aim to play death doom metal. After some months of rehearsals as a duo, Matteo joined the band fulfilling the bass duties. The band is based in Bologna, but all members come from different parts of Italy: Calabria, Emilia Romagna and Trentino-Alto Adige.

After the stabilization of the 3 pieces line-up, the band started the writing process for the first release with Samantha writing all the musics later arranged with Angelica and Matteo. Noteworthy is the fact that the band has already been pushing the live side of their music with the help of an additional guitarist and has already shared the stage with bands like Valgrind, Undergang and Gorephilia among the others. For live gigs only, Ferum appear as a 4 piece band, with an additional guitarist in the line-up.

The debut EP »Vergence« was recorded in August 2018 at Art Distillery Studios and is composed by 5 tracks of raw death metal entrapped in morbid slow parts, the whole engraved by Samantha’s obsessive vocals. The EP also showcases a cover of Cianide’s track »Funeral« (a major influence for the band) and his graced by the voice of Marko Neuman (Convocation, Dark Buddha Rising) who left a deep scar of painful expression to the record.

The lyrics explore mental and physical states of asphyxiating discomfort and desolation taken from everyday experiences. These states inspired also the concept for the cover art: an undefined face pierced by thick thorns and evaporated on a layer of dreary blackness. The picture was taken and processed by Inchiostro Lisergico through with the method called “etching”, in which the design is incised and fragmented by acid, just as time does with reality.