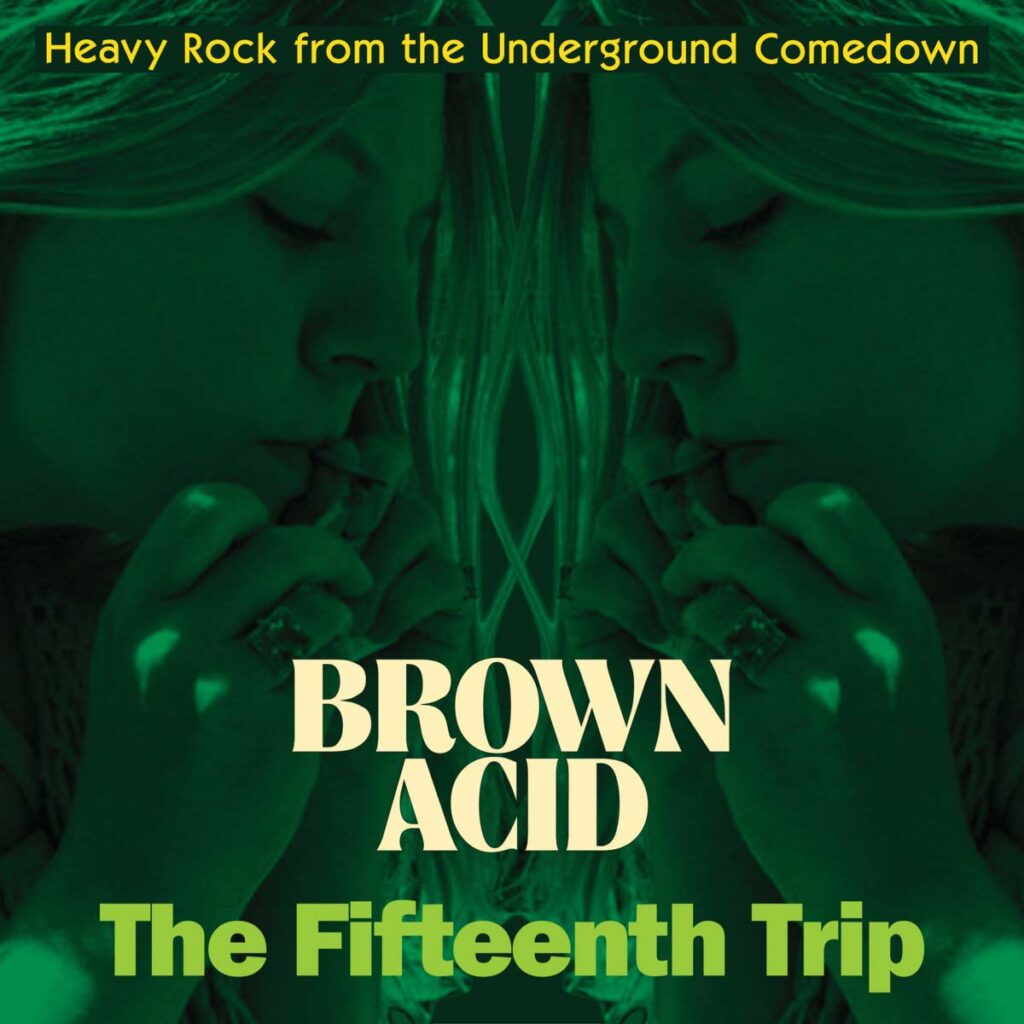 Lo and behold, »The Fifteenth Trip« is upon us, and it’s another mind-melting dose of brilliant long-lost, rare, and unreleased hard rock, heavy psych, and proto-metal tracks from the 60s-70s. Our crate-digging mining expeditions, and growing network of the original artists keeps on giving with more and more incredible discoveries every time we go back for more. Like we’ve done throughout this series, all of these tracks were painstakingly licensed legitimately and the artists were paid. Make yourself comfortable and prepare for yet another deep, deep dive into the treasure trove of dank, subterranean, wild-eyed and hairy rock ‘n’ roll of yesteryear:

As usual, this Trip opens strong, as »Take The Time« swaggers along with switchblade stabs of guitar twang and frantic drumming that sounds like Nick Cave’s 80s post-punk barbarians The Birthday Party on this 1969 single from the mysterious Boston area band The Looking Glass (not to be confused with the 70s soft-rock one-hit-wonders of »Brandy [You’re A Fine Girl]« fame.) But, as one might expect of a band this ahead of their time, The Looking Glass were soon to disappear down the rabbit hole.

The Zoo’s »444« is a 1969 single out of Michigan that’s exactly the brand of rolling, grooving MC5/Stooges/Bob Seger System made famous in the Motor City. And this anthem slams as hard as the best of those well worn classics, which begs the question – whither The Zoo’s day in the limelight? We can only imagine that these animals were too wild to tame in the studio.

Black Hawk was a trio out of Long Beach, CA who frequently played the SoCal club scene. Their lone 1971 single »Little Suzie Looker« features stomping pop hooks driven by some mean soundin’ Leslie West style guitar riffing. Originally named SMG for the members’ initials Sam/McCoy/Giles, the new name assigned by their management failed to take wing, and this Black Hawk was down permanently.

Truth & Janey might be familiar to you from their 45-only »Midnight Horseman« single heard way back on »The Sixth Trip«, and/or their incredible 1976 LP »No Rest For The Wicked«. But their super-driven soul leaning cover of »Under My Thumb« gives the track more of a “lean in” to the descending riff than the original, which adds to its power. It’s almost like The Who had penned the track, with relentless drums, jackhammer rhythm guitar and near-falsetto vocals.

Negative Space toil in the dark web of The Seeds, and dwell in the mystic haze of working class suburbs in Camden, NJ circa 1970. Their angry, nasty guitar sounds and frustration-bogged frontman Rob Russen ensure that the aggro fueled »Forbidden Fruit« – in which he confesses his love for his sister-in-law – will hit you right in the face. Russen self-financed and hand-stamped the otherwise plain white sleeves of their sole LP, proving that DIY aggression predates punk rock by several years.

Scrapiron, out of Carteret, NJ provided history with only this 1971 lone single, »Roxanne« backed with »Poopsie«. The quartet’s over-the-top wailing vocals and warbling sounding guitars and organ give the sexually-charged paean a hint of (Crazy World of) Arthur Brown’s mania, mixed with early Deep Purple’s free-flowing style.

White Lightning returns to the series here, last heard on »The Twelfth Trip«, and their blazing theatrical drumming, sizzling melodic riffs and Jim Dandy howls of »Under Screaming Double Eagle« perfectly sums up the raison d’être of this series. The Minneapolis band formed by guitarist Tom “Zippy” Caplan after he left garage psych heroes The Litter, later shortened its name to Lightning. The group only issued one proper album before disbanding in 1971. However, with the late 1990’s reissues and revival of The Litter, Lightning’s bevy of unreleased recordings also surfaced as a self-titled LP and Strikes Twice 1986-1969 CD compilation.

Crazy Louie remains to this day a celebrated novelty rock act in their Rapid City, South Dakota home, reuniting from time to time to ensure that the insanity defense remains intact in the band’s psych ward files. »My Pants« is a chugging bit of tongue-in-cheek bravado that would do Bonn Scott proud. The release date of this B-side to »What The People Say« is unknown, but predates their Intro Into Craziness« album from 1982.

We’re not sure if they chose their name after the popular British cider or otherwise, but Strongbow’s »Change« is an ultra-slick and tight tune, anchored around a shimmering Hammond B-3 organ riff reminiscent of The Edgar Winter Group’s »Frankenstein« meets Ted Nugent’s »Stranglehold«. The 1975 B-side to the single “If You’re Goin’ To The City« is a fun dose of throw-everything-at-the-wall prog rock outta Columbus, OH.

Closing out this wild psych sesh is the hooky, heavy funk groove of Detroit’s Robert Stark. Fully credited to Robert Starks & The Geniuses this dose of lysergic Hendrix worship is summed up nicely by its title, »Space Traveling (Part 2)«. The lo-fi recording adds to the haunted vibe of this deep Mississippi swamp blues jam, replete with Exuma-esque drum breakdowns. We recommend listening to »Space Traveling (Part 2)« not necessarily stoned, but… beautiful.