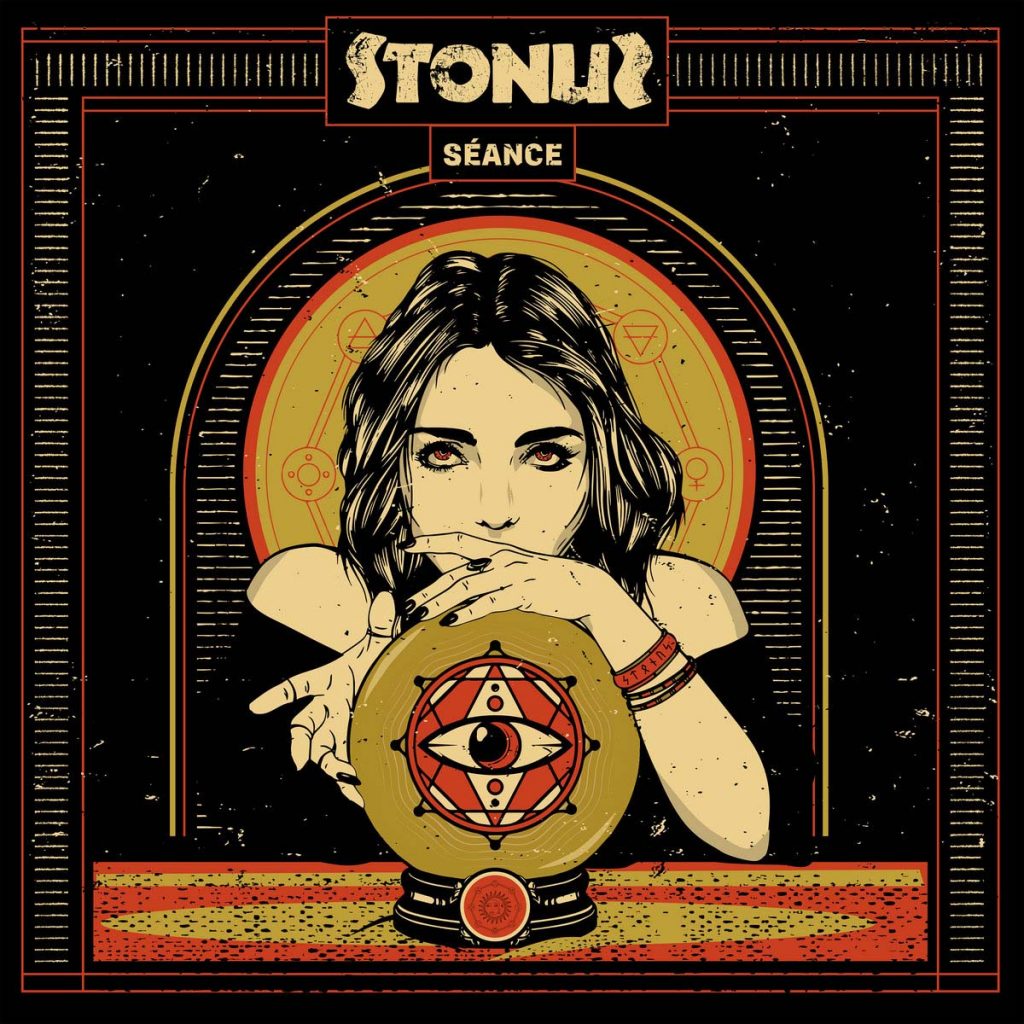 Cypriot heavy rockers Stonus announce their new EP, »Séance«, which will be released on March 26th, 2021 on vinyl via Electric Valley Records.

»Séance« is their third release, a fully analogue 18:24 minute EP recorded live at Hot Soap Studios in Larnaca, Cyprus under the supervision of Andreas Mattheou and mastered by George Leodis. The delicate artwork, perfectly translating the visualisation of »Séance« was crafted by Petros Voulgaris.

Stonus have just premiered a music video for the first single »Evil Woman«, which can be streamed below.

Says the band: “How often do you catch yourself giving in, letting loose and following dark and mysterious paths? Are you even aware you’ve been manipulated by your own desires?”

Hailing through the warm breeze of the Mediterranean Stonus is a heavy rock quintet from Cyprus created in 2015 and based in London since 2018. Their sound can be described as a mixture of stoner, psychedelic, desert, alternative and doom rock with pyrotechnic guitars, fuel firing solos, powerful drumming and raw dirty riffs held together by the melodic vocals and coloured by analogue equipment.

“A séance or seance (/ˈseɪ.ɑːns/; French: [seɑ̃s]) is an attempt to communicate with spirits. The word came to be used specifically for a meeting of people who are gathered to receive messages from ghosts or to listen to a spirit medium discourse with or relay messages from spirits.”

Following the release of their debut album »Aphasia« in early March 2020, Stonus found themselves in the middle of the pandemic, forced to cancel their first European tour – leaving the members isolated in Cyprus, Leeds and London. This was an emotionally heavy period for the band, since they were forced to stay away from the things which kept them together, however these restrictions gave them space to reflect on themselves enabling them to connect and unify with higher energies explored through consciousness, meditation and spiritual melodies.

This is where »Séance« was born, through the ashes of frustration, loneliness and isolation, a silent scream for freedom, a self-realisation of multiple possible realities and an esoteric outbreak leading to a superficial ego-death.

In this trip, Stonus take a more experimental approach seeking into tradition, experiencing folk sounds, gypsy sceneries and expose themselves into the darkest side of nature. In some parts they are raw and heavy, while in others lost in a psychedelic trance, filled with roaring basslines, heavy riffs and dreamy melodies, always bloodthirsty for revolution and change. Whether you’re bound by the evil chains of pretentious love, feeling disconnected from your dreams or being chained to the system, »Séance« is a kind reminder that you are not alone…