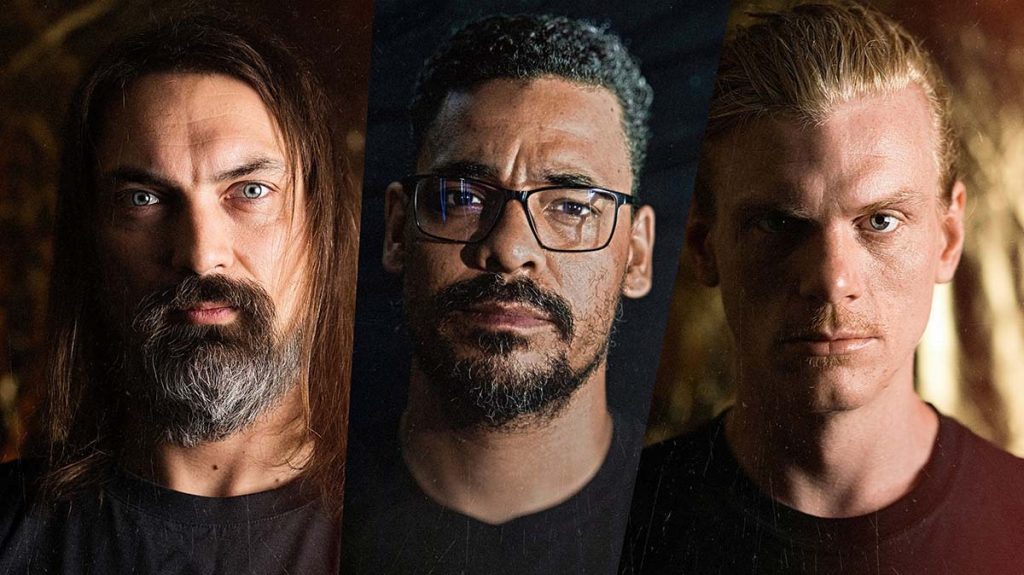 Enigma Experience featuring Dango and Pezo from Truckfighters stream a brand new video for the track »Equilibrium« taken from their debut album, »Question Mark«, out on November 13th, 2020 via Fuzzorama Records.

Sweden and Norway joins forces as Niklas “Mr.Dango” Källgren from Truckfighters teams up with former Truckfighters and Witchcraft drummer Oscar “Pezo” Johansson and Maurice Adams from Breed and former Motorfinger on vocals.

»Question Mark« is a very diverse rock record that opens with the ten-minute odyssey »Realityline«, with vocal harmonies reminiscent of early 90s grunge heroes such as Soundgarden and Alice In Chains whilst elevating guitar lines weave over a pulsating backdrop of rhythm.

Elsewhere »In My Mind My Secret Place« sees them slow things up with an ethereal acoustic atmosphere building into a hypnotically heavy and devastating end, whilst album closer »The Zone« is a furiously catchy anthem with Källgren’s trademark fuzz-fuelled sound piercing through.

As Dango tells more he grins and says: “Adams has been sent from the rock Gods themselves, he is a rebirth of the great 90’s rock voices. I had already recorded the album and it was more or less done except for one track. After meeting him at Truckfighters show, where his then band Motorfinger opened up, I was blown away by his voice “wow, this guy has that solid 90’s sound” a few drinks and we hit it off. I sent him a song that only had the music and he did some vocals on it and I just loved it.”

“That was a one take deal,” Adams shoots in. “Like Dango is saying there was only music on the track file and I just plugged it in and hit record, thinking what happens happens. That vocal track ended up on the album. I love the fact that every track on this album has a great flow and nothing feels forced. Dango knows what he wants and he has so much experience so it was easy for him to communicate what he wanted. We recorded all the vocals in three days and it was great.”

The brainchild of Källgren, he also produced, engineered, mixed and mastered the album as well as playing bass and singing backing vocals.

»Question Mark« comes on LP, CD and will also be available on a limited edition vinyl in a very exclusive boxset with double vinyls with silkscreen printing, double gatefold, double posters and of course a nice box.