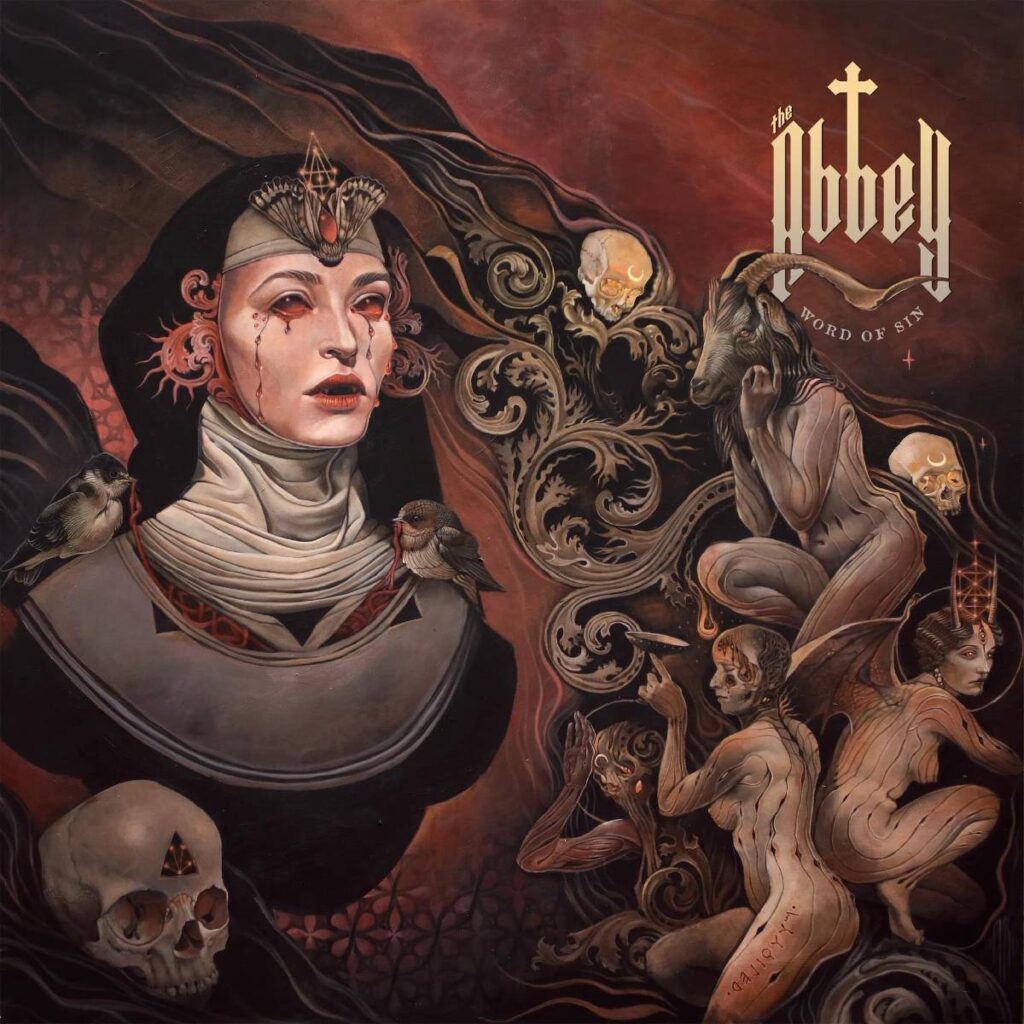 Finnish progressive doom metal act The Abbey share a music video for the second single »Widow’s Will« taken from the upcoming debut album, »Word Of Sin«, which will be released on February 17th, 2023.

The Abbey comments on the track: “This is the first song that guitarist-vocalist Jesse Heikkinen wrote for The Abbey. »Widow’s Will« is maybe the most straightforward track of the album. It is a love song for Death, dedicated to our late loved ones.”

Drawing lyrical inspiration from esoteric organizations, their beliefs and own practices, Finnish music veteran Jesse Heikkinen and co-lead vocalist Natalie Koskinen (Shape Of Despair) weaved ritualistic tales from the darkest corners of themselves to pair with music that is a provocative, alluring kaleidoscope of dark, heavy rock. The result is the mystical »Word Of Sin«, The Abbey’s nine-song debut long-player. Featuring former Sentenced and The Man-Eating Tree drummer Vesa Ranta, Janne Markus (guitar, also of The Man-Eating Tree) and Henri Arvola (bass), the emerging progressive doom rock band debut album is certain to entrance and captivate the listeners with its spell.

Aleister Crowley’s Abbey of Thelema was located in Sicily, Italy, and functioned as ground zero for many of the occultist’s most complex and groundbreaking hedonistic pursuits. Here, Crowley codified his ritual practices and took his concept of “Magick” to new, unforeseen levels. He rebranded the temple as “Collegium ad Spiritum Sanctum”, translating to “A college towards the Holy Spirit.” But the Abbey of Thelema was not without its controversy: A young disciple died in 1922 after contracting typhoid fever from the drinking water. And a year later, Crowley was evicted by Italian dictator Benito Mussolini’s regime, yet the mystery and intrigue behind the Abbey of Thelema remain.

It was only appropriate, then, that Jesse Heikkinen, a veteran of the Finnish music scene and a solo artist under the Iterum Nata banner, branded his newest musical pursuit as The Abbey. Drawing lyrical inspiration from esoteric organizations, their beliefs and his own practices, Heikkinen and co-lead vocalist Natalie Koskinen (Shape Of Despair) weaved ritualistic tales from the darkest corners of themselves to pair with music that is a provocative, alluring kaleidoscope of dark, heavy rock. The result is the mystical »Word Of Sin«, The Abbey’s nine-song debut long-player.

The Abbey tale began when Heikkinen generated the sudden urge to try his hand at singing in a doom metal band after laying down guest vocals for fellow countrymen Fuzzifer. His idea was to form a doom metal band with “big vocals” – a project for fun’s sake that would thrive off writing from the heart and improvisation. Those plans involved former Sentenced and The Man-Eating Tree drummer Vesa Ranta – the first name that came to Heikkinen’s mind for the project. 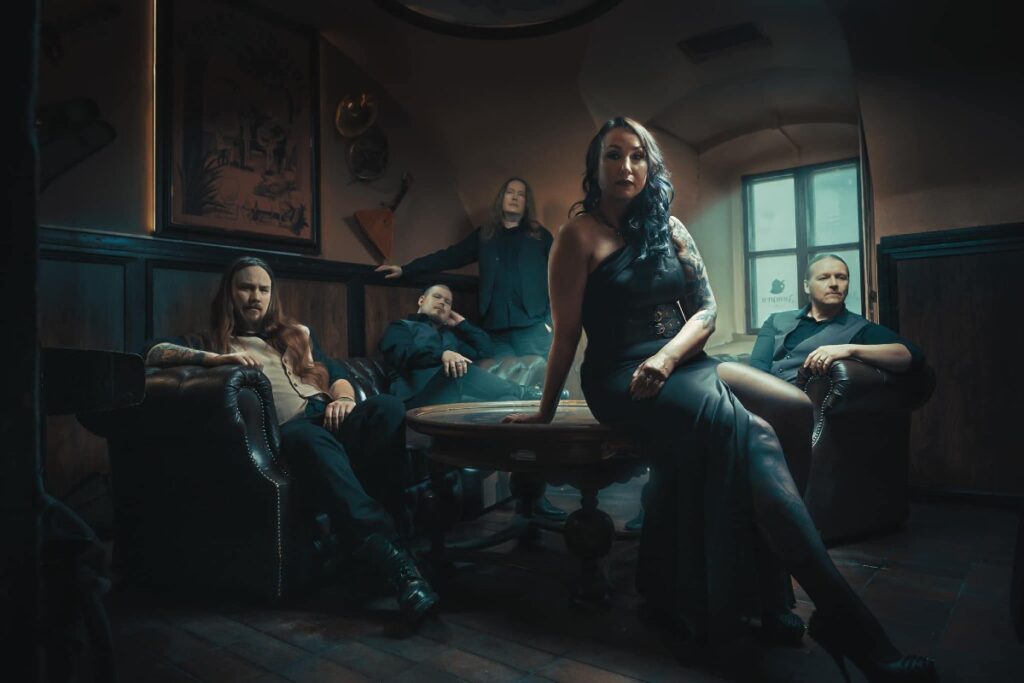 Ranta, now a professional photographer and filmmaker, provided the steady backbone behind Sentenced’s groundbreaking career that was brought to its conclusion in 2005. According to Heikkinen, Ranta plays “like a battalion of marching giants,” a not-so-subtle nod to the drummer’s mastery of the quarter-note. Ranta quickly took to Heikkinen’s early demos and suggested they add a female singer. Enter Koskinen. Koskinen knew Ranta from a video shoot where she was serving as a makeup artist. Reluctant to try a new band considering her Shape Of Despair and career obligations, Koskinen listened to Heikkinen’s first demo and decided to give the project a go. Janne Markus (guitar, also of The Man-Eating Tree) and Henri Arvola (bass) were soon tapped to complete the band’s lineup.

»Word Of Sin« was recorded between April and November 2021 in several locations across Finland. Drums, bass and Markus’s guitars were tracked at Kratio Studio in Oulu by Kyösti Rautio. Rautio also served as co-producer and mixed the album, becoming the unofficial sixth member of The Abbey. Heikkinen, who recorded most of his vocals and guitars in his stepdaughter’s room, surrounded by My Little Ponies, Disney figurines and a pile of esoteric literature, is careful to point out that The Abbey fails to drop into any neat, little subgenre.

“The album was made purely for self-expressive reasons,” he says. “My music is the channel where I can be as true and authentic as possible. It is also a somewhat safe way to explore and express the dark side of myself and the collective consciousness. »Word Of Sin« may seem like a tremendously dark piece as a rock album, but it’s pretty lightweight for a doom metal album! The material proved so strong that it was obvious that it wasn’t going to be another side project. I think using the means of improvisation made the music sound more like its creator instead of it being forced to be this or that – and that seemed to work really well for us!”

Regardless of where »Word Of Sin« falls between the vast channels of doom and heavy rock, the vocal interplay between Heikkinen and Koskinen is undeniable. Each has songs where they take the lead, but their harmonies and trade-offs carry songs like »Rat King« and »Desert Temple« to the fore, creating a restless, captivating atmosphere resembling vintage rock from the 1970s. And, for his first go at singing lead in a band, Heikkinen proves to be quite the capable vocalist, carrying a smooth, almost airy delivery on »Crystallion« and »Widow’s Will«.

“I didn’t think of it that much – my vocals all came naturally,” he says. “I still think I’m more of a guitarist than a vocalist, really. During the writing and recording, I listened to King Crimson’s Red quite a lot, so I’m sure I got some influences from John Wetton’s singing on that album. The vocal harmonies were heavily inspired by bands like E.L.O., Queen and Yes.”

Heikkinen and Koskinen didn’t know each other before the formation of The Abbey. Heikkinen met Koskinen for the first time when she tracked vocals at his home studio, but their partnership generated immediate results. “Nowadays, I usually record my vocals at home, but in this case, as I had yet to meet Jesse in person, I wanted to record my parts at his place,” says Koskinen. “It’s very important to see what kind of energy is between the musicians I’m going to work with in the long run. It turns out that we are a perfect match musically. Later on, I traveled to Oulu to meet the rest of the guys [Janne and Henri] and I must say that we had a very strong bond from the beginning. Sometimes things just happen even when you don’t plan them.”

“The right lines for each were found really easily,” adds Heikkinen. “There already were dozens of vocal tracks in some of my demos, but every time Natalie found her place in the song, she added something new into it.”

The creative process behind »Word Of Sin« proved so fruitful that the members of The Abbey are already thinking about a follow-up. It’s a testament to the material’s inherent strength and the immediate bond between all five musicians.

“The Abbey will most definitely be an active and serious project for me – I do hope it will turn out fun as well,” wraps Heikkinen. And closes Koskinen: “I do have a feeling this band will make a long trip together.”