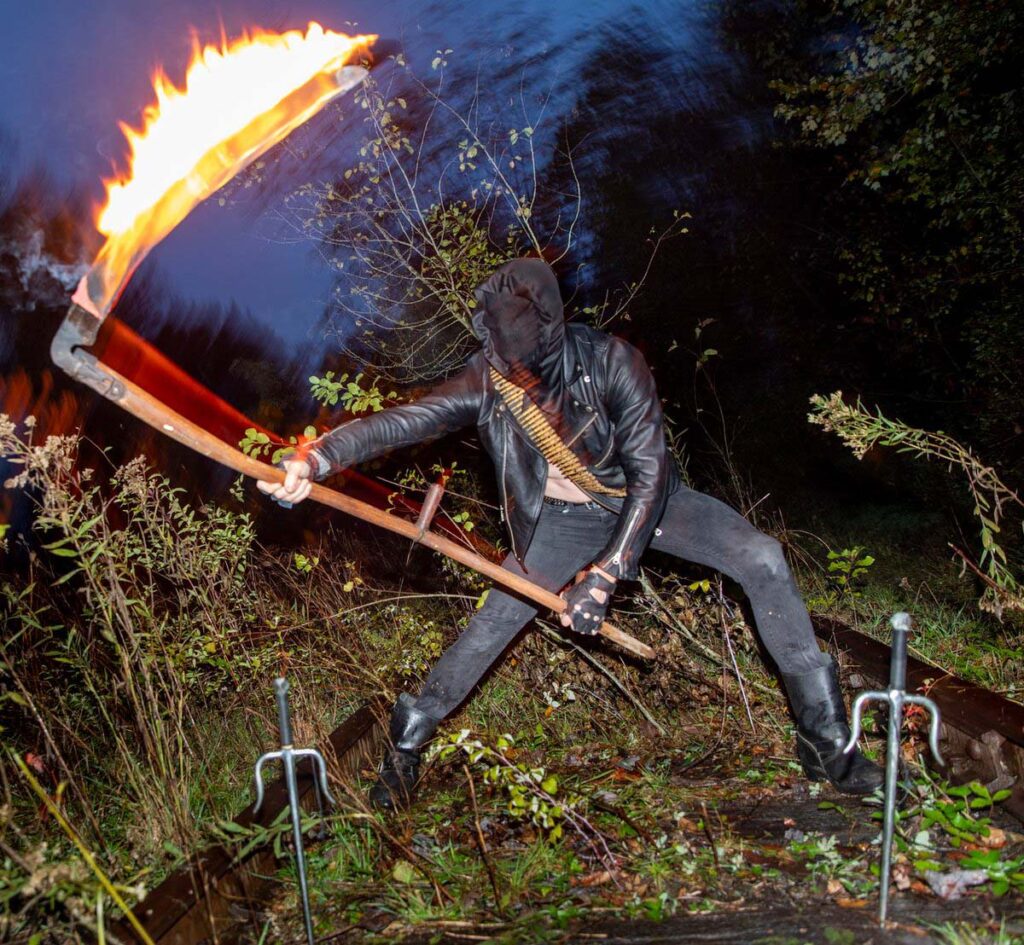 Filthy, belligerent and obnoxious, Midnight make music to start fights to. Since 2003, one-man band Athenar (ex-Destructor, ex-Toxic Holocaust, ex-King Travolta, ex-Abdullah, ex-Hangnail, ex-Boulder, ex-Sloth, ex-Terminal Lovers) has been churning out an ungodly racket, dropping countless demos, splits and EPs, and in 2022 he returns with Midnight’s fifth full-length, »Let There Be Witchery«. Delivering more of what can be expected from his demented mind, it is a catchy mixture of black and speed metal and dirty punk rock, and it is relentlessly compulsive. “I always want it to be loud and nasty,” he asserts. “That kinda thing never gets old with me. How funny will that look to see me at age 77 – if I reach that point – sitting on the porch blasting Hellhammer?”

Generically describing it as being “a Midnight record”, Athenar believes it would make a fine introduction into the warped world he exists in for anyone new to the band, and he is not wrong, possessing all of Midnight’s trademarks, amped up to eleven. The profoundly sinister d-beat romp »Telepathic Nightmare« kicks things off unpleasantly, and from there he slams through the likes of riot-starter »Nocturnal Molestation«, the Motörhead-esque »Let There Be Sodomy« and loping bruiser »More Torment«. “I never really sit down and say, ‘okay, now I’ll start to make up some jams’ – they just get stockpiled. The tunes on this one started coming around early 2019. Writing catchily comes naturally to me – if something is difficult for me, I just don’t do it, so it has to be natural. I’m a person that says if at first you don’t succeed, fuck it. But yeah, catchiness and hooks are important to me.”

When asked if there’s anything on this record he has never done before, he has a typically Athenar answer: “I used the term ‘vulva flesh’. I can’t believe it took this many albums to get to that point. There’s also the tune ‘Devil Virgin’ which has the Mercyful Fate disco hi-hat beat. That’s something different.” Guitar solos are of course also an important factor in any Midnight record, and »Let There Be Witchery« does not disappoint in this department. “All the solos have been spontaneous since the start of the band. I just give it a shot, then maybe stumble across a theme, then try it again and again and again. That’s the way I like solos to sound, spontaneous yet have some sorta map in there to follow, kinda like a methed up lunatic driving a car missing a wheel at top speed down a curvy highway on his way to get more meth. It’s not gonna be pretty, but you know he’ll find a way to get there somehow.” 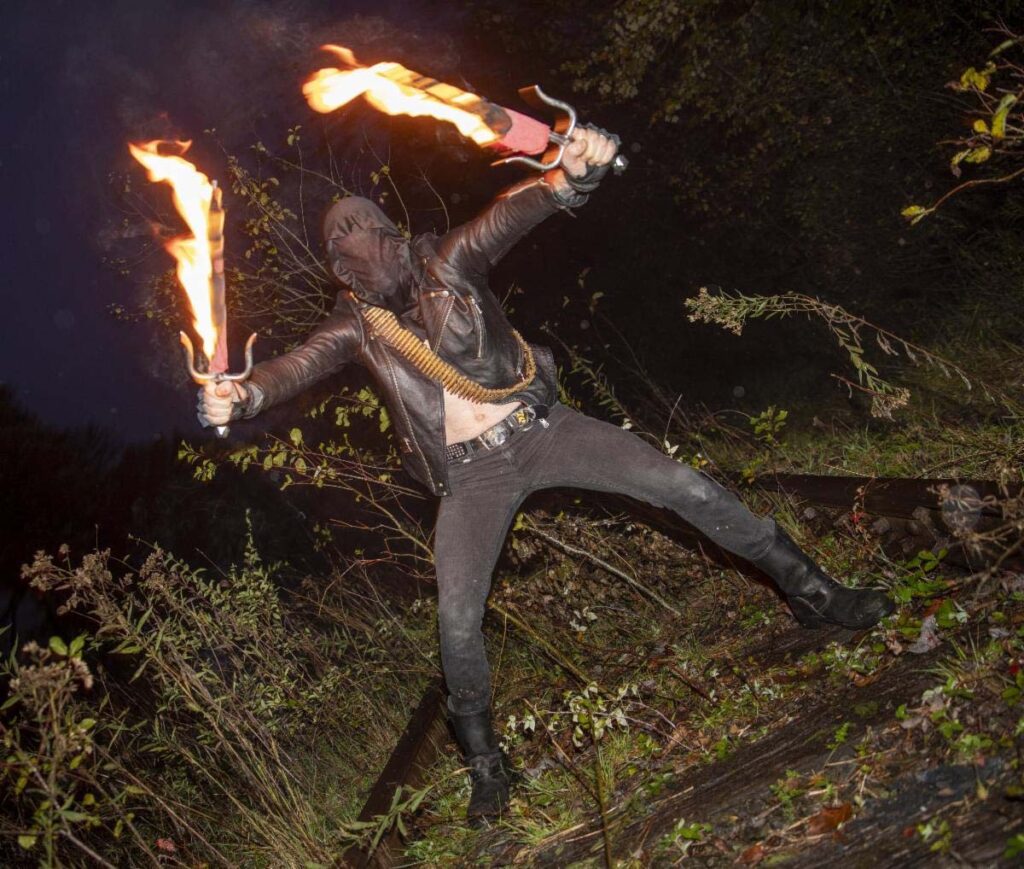 The title is a combination of the song titles »Let There Be Sodomy« and »Szex Witchery«, Athenar wanting to maintain the tradition of using six syllables. Lyrically, the record is “unfiltered savage animalisticness”, and the deeper the listener delves, the dirtier they get, which is just the way it should be. When it came to tracking the record, Athenar returned to Mercenary Studios in Cleveland, OH and producer Noah Buchanan, who makes it very easy for him to cut loose and make noise, choosing to once again record all the instruments himself despite having a live band that could step in and help out. “It’s still just me and my science project gone awry. I realize I’m musically handicapped, but there’s a charm to it.” The sessions went by fairly quickly, and there were no real problems to navigate – it’s after the tracking that things got a little trickier. “The mixing process can take a bit more time because I have no idea what I want until I hear it. I keep telling Noah, ‘I want it to sound like a mix of Raw Power and Apocalyptic Raids!’ Then he has to sit me down and say, ‘those records already exist, let’s make it sound like Midnight.’ The most difficult part may be the vocals, just because I’m not usually in vocal shape, although this time around I was kind of in shape because we did so many gigs in 2019 that by the time it was recorded in February 2020, my throat was still used to being tortured.”

With artwork once again handled by William Lacey, who always wants to make things suitably creepy, Athenar is very happy with that side of things and content that the record will be shat into the world in the way that it should be. Next comes touring, backed up by Commandor Vanik and Secret Steel, “they’re not a good live band, they’re a great live band! They are masters of their craft – those guys really hold it all together. I’m just meandering around bashing away and grunting.” Mulling over the question as to why anyone should actually give a shit about Midnight, he once again comes up with a typically Athenar answer: “If I were to give actual good advice, I would say stay clear of anything to do with Midnight. But I’m not a rational thinker, so as usual, I will give terrible advice and say punish your earholes and play this album as loud as your stereo goes, go out to a gig and mingle with others that you don’t know, lick their faces and rub upon each other’s sweaty torsos to the hellish, neanderthalish noise of a band called Midnight! You gotta release your demons somehow! That’s why you should give a shit, or two.”