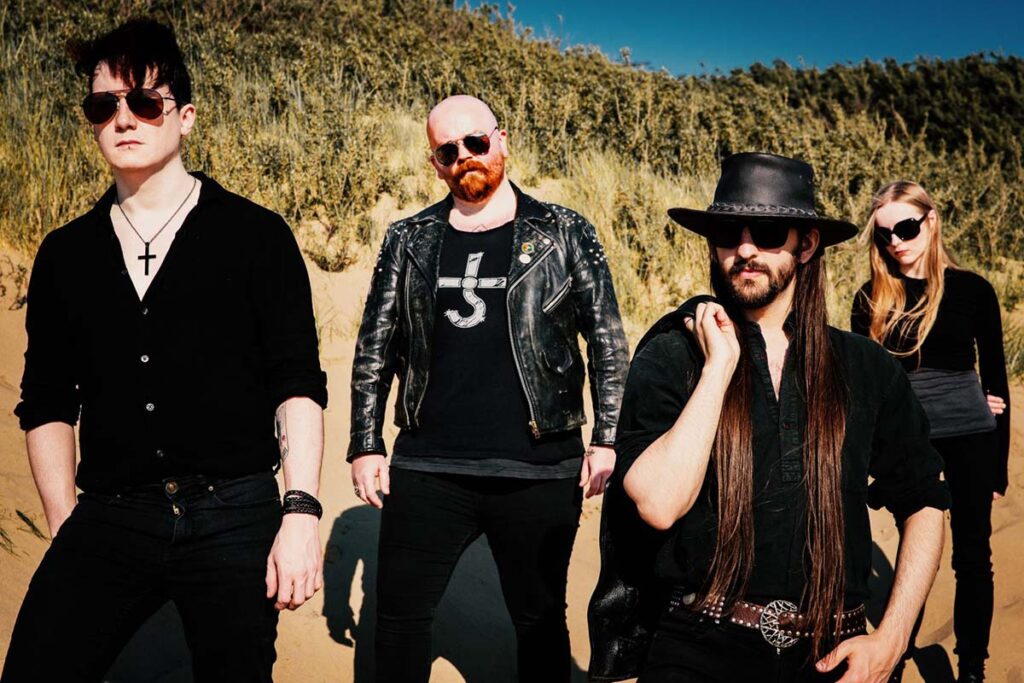 Naut are a four piece drum machine rock band from Bristol, whose shared love of classic rock and metal, alongside reverence for the post-punk pioneers of the late 70s and early 80s makes itself known from the start. Triumphant synths and scything guitars entwine with danceable beats, while driving bass-lines, moving to pounding drums, create a dynamic and shifting rhythm section. The tracks pulse with a raw post-punk energy but always remain danceable and (perhaps most dangerously) catchy. The lyrics touch on mental paralysis, impending doom and divided peoples, and with the path our world is currently on they have become more relevant than ever.

Starting out as an evening sharing riffs in a flat in Bristol, the first tracks for Naut had their genesis in 2016. Those first riffs, written by Gavin (vocals) & Jack (guitars) grew to become something much more compelling and after that initial moment, the idea of a band was born. Gathering musicians from Bristol’s small but active post-punk scene and armed with rough recordings, Naut started working on the tracks as a full band in June 2017.

It all rapidly fell into place. Naut’s first show was in September 2017 followed by two shows supporting Grave Pleasures before the year was out, and they entered the studio the following November. Raise the Lights – their debut EP was recorded at RS Studios in Bristol by Jamie Elton (Moss, Amulet, Spite) and was mastered by Orgone Studios (Ulver, Grave Pleasures, Ghost). The final mastered tracks were ready in March 2018 and plans were put in motion for a June release of a debut EP that made people take notice. The intention was to break out into the world and Naut did just that, with coverage in Kerrang! Magazine as well as a host of smaller blogs, publications and radio.

2018 saw more live shows with Abysmal Grief and David Eugene Edwards & Alexander Hacke as well as a sell out show in Bristol, and the start of some new material.

Not content to sit still, Naut were soon ready to enter the studio again with new tracks written at the end of 2018, initially planned as a double A single, but growing into a 3 track EP. The song writing was rooted firmly in the foundations laid by Raise the Lights, but also broke new ground. With a solo in the title track Semele provided by Henrik Palm (Henrik Palm, ex-In Solitude, ex-Ghost) and the same winning combination of recording with Jamie Elton and Orgone Studios taking care of mastering duties the tracks were finished by April 2019.

The »Semele« EP was released in November 2019 and was well-received. Featured in multiple high profile websites such as Louder, Vive le Rock, Distorted Sound and more, the EP helped establish Naut on the scene as a band to watch.

»Threads« and »Hand In Hand« were recorded in late 2019, building on the spirit of experimentation in the »Semele« EP whilst calling on elements from »Raise The Lights«, creating a tantalising mix of the two. The songs were once again recorded by Jamie Elton with mastering handled by Orgone Studios.

During this time Naut remained an active presence in the UK live scene, sharing the stage with bands as diverse as their fan base, from Discharge to Orange Goblin.

The end of 2019 also saw a change in Naut’s format, with the departure of their drummer. Naut had started life as a drum machine project before the addition of Kenny Selway for the debut EP, and after a string of changes, the obvious choice was to return to that format. This opened up new avenues for musical exploration, on and off stage.

With the spectre of a global pandemic looming large, in March 2020 Naut played their last live appearance of that year in a sold out St Pancras Church in London with King Dude. With that the world of live music went silent. 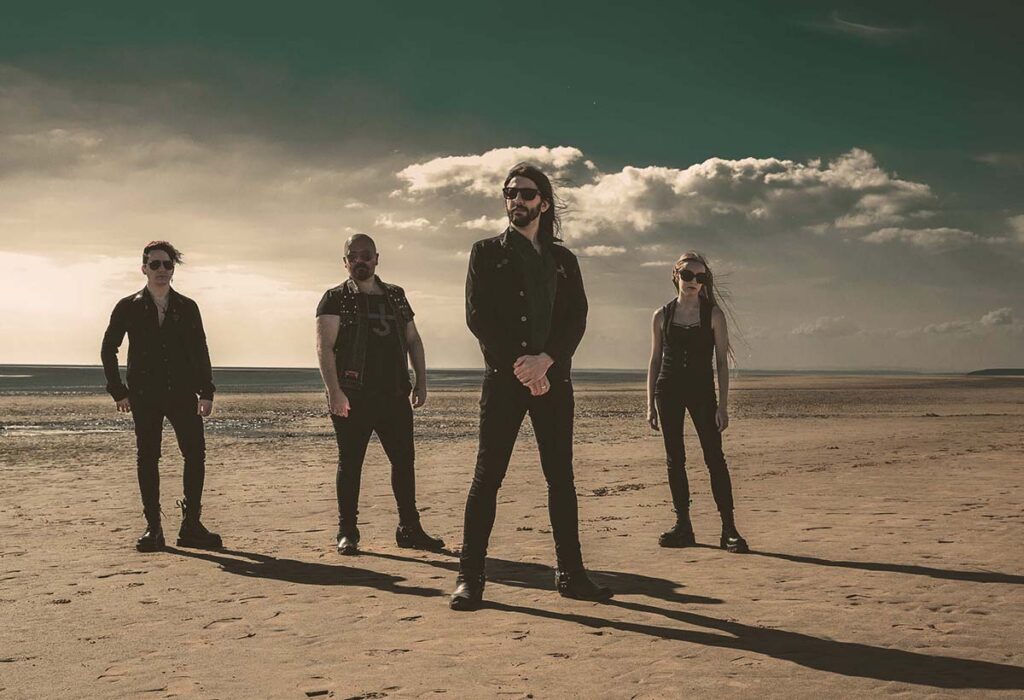 However Naut remained active below the surface, »Threads« and »Hand In Hand« were released as a double A side 7” in June 2020. With this release Naut further gained the attention of fans from across the spectrum of dark music. Word spread further around the scene adding fans to the ever growing following, with »Hand In Hand« featured in Kerrang! Magazine’s Kerrang! Rock Chart and a number of other high profile goth and post-punk playlists and the music video, creatively produced under the restrictions of a strict lockdown, garnering a strong reception.

Not content with releasing these new songs, work on a debut album was also underway. Over the long months of restrictions and lockdowns Naut crafted the demos for their debut album, making the most of the dormant state of the music world, something special was being fashioned. The turmoil of 2020 also opened other opportunities and Naut struck a partnership with Doomstar booking agency, ready for whenever the venues open.

Now Naut are excited to have signed with Seasons Of Mist for the release of their debut album. The label has come to represent all shades of musical darkness and feels like a strong pairing for Naut, as although the band are less extreme in their musical approach, dark music in all its facets underlies all that they do.

Naut can’t wait to share this upcoming slab of infectious and pulsing drum machine rock with you all.

The band comments: “At last! It has been a long time coming but finally we can reveal the first single from our debut album. We feel that »Unity Of Opposites« best sums up our sound and the approach we have taken with »Hunt«: dancefloor hits mixed with our blend of knife-edge rock and post-punk. It was inspired by the writings of Heraclitus and how this still relates to our current world as a seemingly universal truth, the pendulum swings back and forth, to the same place but it’s never the same motion. To top it off, Chris ‘Stig’ Miller from legendary UK band Amebix/Tau Cross lends his talents to a short spoken word section in the song, and it was wonderful to have him do so.”

»Unity Of Opposites« was inspired by the writings of Heraclitus and how this still relates to our current world as a seemingly universal truth. Now as then, it takes one part to define another, ugly is required to establish beauty, chaos is needed to contrast order, to have left there must be right. It can be seen in nature, physics and the minds of the masses. The rise and fall, things that are both different and yet part of the same. This can also be said of the actions we take, you can repeat it but it can never be that same action you took. You can capture a moment in a memory or by some technological means but it can only ever be a recreation when revisited. The pendulum swings back and forth, to the same place but it’s never the same motion.

“The singles we have selected demonstrate different facets of the band and »Dissent« is a perfect track to highlight certain things we think are key to Naut’s sound. »Dissent« is »Hunt«’s opener and one of its ‘heaviest’ offerings, thematically and musically. The video is stark and works as a lyric video of sorts, where key words and phrases are splashed up on screen like a dissenting voice speaking its truth, daubed across a bleak corporate wall.”

»Hunt« will be released worldwide on February 24, 2023 via Season Of Mist. Pre-order the album at this location!