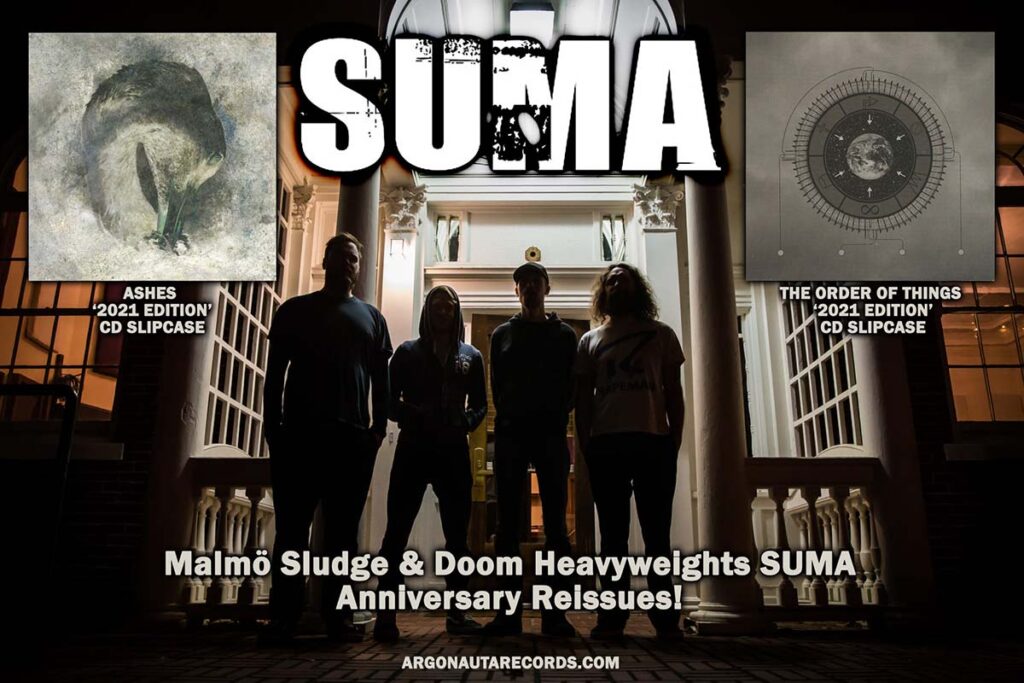 BOOM 🔊💥 Two new Suma 20th Anniversary Reissues are now available for pre-orders. Get yours now and save 10%: argonautarecords.com/shop

»Ashes« re-release comes as an anniversary jewelcase CD, containing the yet vinyl-only bonus track »Wornout… Marked for Death… Burn Your Flag!«, featuring both the original CD and vinyl artwork.

Recorded with Billy Anderson and released in 2016, »The Order Of Things« sold out in within just a couple of months. Re-released in the 20th Anniversary band series.

Hailing from Malmö, Sweden, Suma has been spreading the plague of their sonic weight, doom-ridden hallucinatory noiserock, on the world for the past two decades. To celebrate their 20th band anniversary this year, the band announced to reissue their impressive back catalogue through Argonauta Records, starting in June 2021 with Suma’s longtime sold-out debut and the 2006-magnum opus, »Let The Churches Burn«!

With a strong DIY-mind since their early days, SUMA has released most of their music through their own label imprint Speakerphone Recordings, they’ve managed to tour through their own booking manpower, but have always appreciated the support of the kindred spirits with labels and agencies along the way.

The heavy four-piece released four highly acclaimed full-length records, several splits and two live cassettes to date. They toured extensively around Europe through the years, parts of the US and Russia, sharing stages with bands alike Entombed, Yob, Sunn O))), High On Fire, Electric Wizard, Bongzilla, Disfear, Big Business and Pallbearer, and played some of the renowned festivals of their genre such as Roadburn, Desertfest Berlin and London.