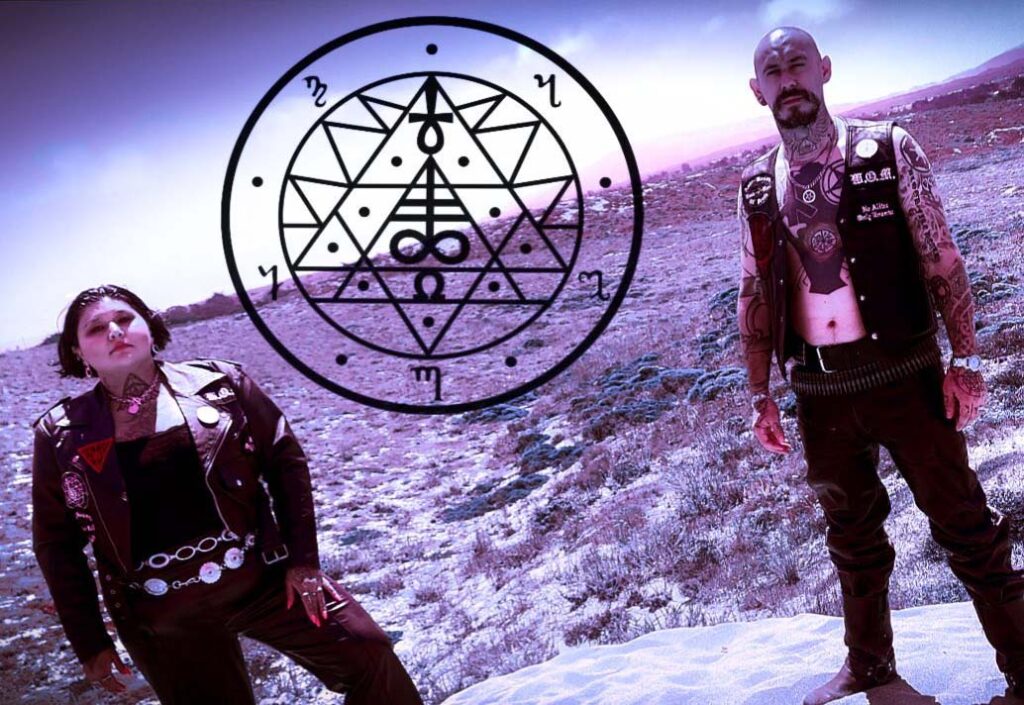 Californian occult rock outfit Thangorodrim share a music video for the latest single »Hanged Are The Bones Of Love And Death« taken from their debut album, »Liberation In Unbound Chaos 666«, out on November 5th, 2021 via Blood Blast Distribution.

Cvlt Nation is hosting the exclusive premiere of a new video for »Hanged Are The Bones Of Love And Death«, a track from San Jose, California occult rock coven Thangorodrim. The song is found on the band’s recently released psychedelic debut album, »Liberation In Unbound Chaos 666«, out now through Nuclear Blast’s digital subsidiary, Blood Blast Distribution.

The mission behind Thangorodrim is to pay homage to the Devil and bring chaos back to rock n’ roll. Prepare to witness the band’s testimony and worship. On »Liberation In Unbound Chaos 666«, the band delivers fire and fury with their unique blend of soulful, Satanic hymns, matched with an intoxicating, chaotic groove. The band aims to spread their Anti-Kosmic Chaos far and wide, channeling mysticism with a psychedelic edge. Drawing on influences such as legends Roky Ericson of The 13th Floor Elevators and Jon Nodtveidt of Dissection, this commanding collective demonstrates a sound, direction, and devotion unlike no other. »Liberation In Unbound Chaos 666« was engineered, mixed, and mastered by Ryan Perras, and completed with cover art created by Seventh Bell Artwork.

With the »Hanged Are The Bones Of Love And Death« video, Thangorodrim proclaims, “Death for death blood for blood mind for mind, devotion in absolution.”

Writes Cvlt Nation with the visual’s premiere, “When I read the words ‘The Devil’s Rock ‘n Roll’ on their Bandcamp page, I really thought I knew what to expect from Thangorodrim. It turns out I was wrong. Instead of Sabbath-worship, I hit play on ‘Hanged Are The Bones Of Love And Death’ and found myself cruising through the desert on the black wings of a fallen angel with a voice so soulful I might have called it alluring if it wasn’t so ominous. This San Jose band sold their souls to the Devil in exchange for a groove that just won’t quit, and they went back to the roots of rock by incorporating a heavy dose of blues along with a driving rhythm section and psychedelic riffing. Whatever blood magick rituals you have planned for the coming solstice, let Thangorodrim serenade you as you lacerate your flesh.”

»Liberation In Unbound Chaos 666« is out now on Nuclear Blast’s digital subsidiary Blood Blast Distribution, streaming on all platforms including Bandcamp where a limited physical edition is available HERE. Also watch the »Through The Devil’s Door« artwork video HERE and the »Thirst For The Bleeding Womb« visualizer HERE.

In 2020, Thangorodrim entered District Recording Studio in their hometown of San Jose to summon and create their maiden full-length release, »Liberation In Unbound Chaos 666«. With eleven spellbinding movements, the band delivers a massive record which beholds more than eighty-five minutes of »The Devil’s Rock N Roll«. The core members, bassist/guitarist S.K.B. and vocalist C.G. BloodCrown, were joined by drummer C.C. in the studio for the recording of »Liberation In Unbound Chaos 666«.

Watch for additional videos, live dates, and much more to be posted over the weeks ahead.