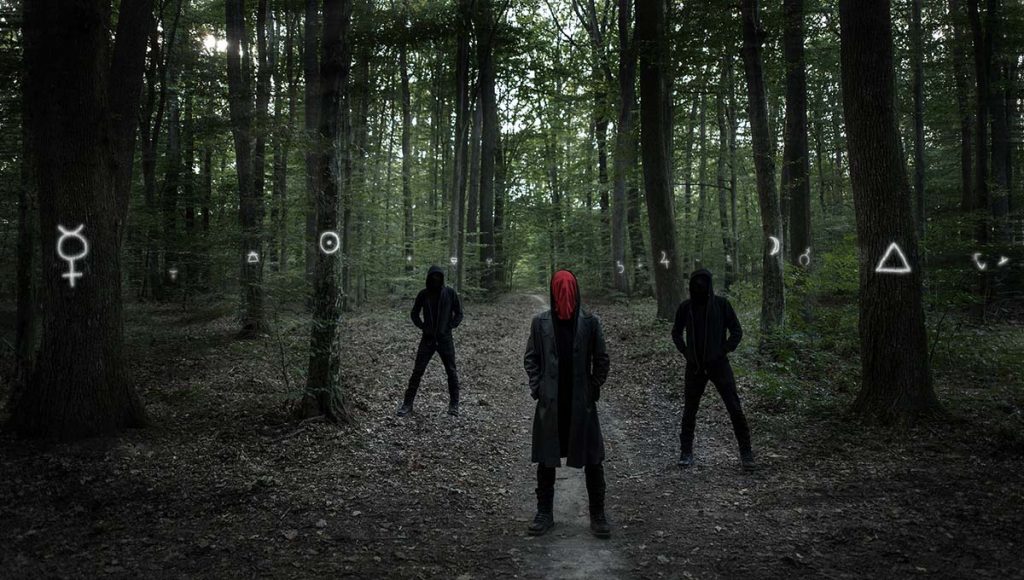 The band’s intention is to express their creative visions through slow, heavy and atmospheric music. Metal as they see it is over the top, mysterious, layered and it takes much more than superficial listening or consuming to delve deeper into the very message that music conveys. It also has a strong visual imagery that, along with the musical part, represents two sides of the same coin which cannot exist without each other.

What can you tell me about Elusive God? What is the concept behind the band? You seems to be very mysterious and not much information are available about the band.
Elusive God: First of all, greetings to you and all Doomed Nation readers and thanks for giving us an opportunity to present the band. Elusive God is a doom metal band from Croatia founded in 2018. We play music that we would normally like to listen to as fans. It’s dark, heavy and atmospheric with strong traditional metal influence. Also, we believe that visual imagery gives music another dimension, so we put a lot of effort in video creation. So far, we made two videos – first one for the song »Silence Is Our Doom«, and second one for the song »Dream Within A Dream«. From the beginning we kept identities of band members a secret in order to completely shift the focus of our fans and listeners to our musical creations. In this way we’re bringing back mystery and mysticism back into metal music.

Your sound is very traditional and my first association would be Candlemass, Manilla Road or Memento Mori. What are your main influences?
Elusive God: Our main influences are classic metal bands – mostly heavy and epic stuff, but we also like extreme metal as well. When it comes to doom metal, Candlemass reference is always a huge compliment because it’s great to be compared to one of the greatest doom bands of all time. We’re also influenced by some newer bands, Dread Sovereign and The Devil’s Blood for example. Basically, everything you’re listening to is probably influencing you on subconscious level so it’s also important to find music you’re listening inspirational.

In »Dream Within A Dream« for example there is also a little part before the solo comes in that could be considered as typical “Balkan rock” moment. Was that your intention or it happened spontaneously?
Elusive God: Yes, this melody is heavily influenced by traditional Balkan music. There is something unique in these types of melodies, they carry a special type of haunting melancholy and epicness. Also, we can’t, and we won’t escape from our musical heritage, so more of these influences can be expected in the future, both in riffs and melodies.

Is Elusive God strictly studio project or you also play live shows?
Elusive God: So far, we’ve been engaged only in studio work. But, to be honest, there weren’t any chances to play live shows anyway due to a current situation. We’ll see what the future holds.

Your debut EP »The Darkest Flame« was released in December 2020 via Russian label Solitude Productions. How did you get in touch with them?
Elusive God: Once our first video for »Silence Is Our Doom« was done, we contacted some labels, Solitude Productions included. We decided to try with them because we needed a good and reliable introduction to the doom metal scene and Solitude Productions seemed like a perfect fit. Also, they’re the biggest doom metal label in the world. So far, we’re very satisfied with our cooperation.

Solitude Productions is mainly focused in doom metal. Were you familiar with some other artists from their wide branched catalog before?
Elusive God: Yes. Fvneral Fvkk and Obsidian Sea are the bands we were familiar with. Also, Doom:VS is a very impressive band.

How are you satisfied with your first official release? Do you have a favorite song(s) on »The Darkest Flame« EP?
Elusive God: Our first release made a very good introduction of Elusive God to the metal scene. Everything sounds punchy and big, emphasising the overall atmosphere of the songs, so we’re very satisfied with the overall sound of the EP. Reactions, reviews and feedback have been great.
It’s difficult to pick any song as a favourite. Each one has its own story and meaning and therefore is special in its own way. Let’s leave this one to fans.

What do you consider to be the most insightful moments while writing and recording this EP?
Elusive God: Well, from the start we knew what we wanted to achieve and had the means and will to achieve it. The thing is, ever since Elusive God started, the whole atmosphere around the band and people included in various musical and visual aspects has been phenomenal. The whole story more or less resembles some sort of an art collective in which everybody contributes with their passion and skills. So, with that kind of creative and musical madness of everybody included, every step of the way is a pure delight.

Where do you get the inspiration for your music?
Elusive God: It varies. Sometimes the best inspiration for making music can be other music. Sometimes introspection can get you very far in the creative process. Sometimes it can be your thoughts, dreams or just an escape from everyday routines. Mythology, occult and spirituality are also great sources of inspiration. The key is to be open and familiar with what comes from within and then channel it to music. Also, you must listen to the music that’s playing in your head and try to transfer it to an actual song.

What is more important for you in the writing process, music or lyrics?
Elusive God: It’s equally important. Both music and lyrics are a part of an overall unit – a song. So it’s really important to focus on both of the aspects.

How was »The Darkest Flame« received in Croatia? I mean, there are not so many doom metal bands, beside Elusive God and Old Night…
Elusive God: We mainly get positive reactions and feedback, but up to this point it seems that most of the reactions came from abroad. This is not something unexpected because we based our promotion mostly on foreign channels and contacts since there really isn’t much of a chance to promote metal music in Croatia. However, metal enthusiasts who stumbled upon Elusive God’s work in Croatia were pleased with what they’ve heard and thanks to our videos we even got very positive reactions from non-metal listeners.
Also, there are a few more Croatian doom metal bands that you should check – Lord Drunkalot and Hrmülja for example.

What can you tell me about Croatian metal scene in general? Are there any artists that you would like to point out?
Elusive God: There always were and always will be metal enthusiasts who keep the metal flame alive in Croatia thanks to their determination. On the other hand, these enthusiasts are having a really tough time to begin with since every step of the way has many obstacles. Also, the current pandemic situation is not helping at all to art and culture. However, the impression is that Croatia always had many local micro-scenes that somehow failed to unify on a national level. Despite all that, there were always good bands throughout the years with more to come hopefully.
It’s difficult to point out to certain artists because you always leave somebody out. But, a good overview of Croatian scene would be bands like Frozen Forest, Narednik Lobanja i Vod Smrti, Stimulans and Seven That Spells.

You have also released music videos for »Silence Is Our Doom« and »Dream Within A Dream«. What can you tell about this experiance? How important are for you the visuals to present your music?
Elusive God: We put a lot of attention and energy into music videos because if done properly, they can add additional layer and meaning to the music. That’s why we encourage everybody to take a close look at our videos for all the hidden and subtle details that take our music to the next level.
Both videos were done by Kontraliht (www.kontraliht.com). Every second of making these videos was truly a remarkable experience intertwined with hunger for expression.

Are you working on any new songs? Can we expect your next release soon?
Elusive God: Yes. Actually, right now we are in the middle of the recording of our first full-length album. We expect to release it hopefully in the first half of 2022.

How did Covid-19 lockdown affect you as a band?
Elusive God: We were fortunate enough to finish the production of the EP and have it released as planned. We also made a video for the song »Dream Within A Dream«. Besides some minor delays and extra effort to get everything done, lockdown didn’t affect us as much as many other bands. Most of the last year we spent composing and pre-producing new songs anyway.

What music is currently on your playlist?
Elusive God: Excellent 2021. releases:
Wheel – »Preserved In Time« – one of the best DOOM metal releases in a last few years.
Dread Sovereign – »Alchemical Warfare« – instant classic – they’ve managed to take their style to the next level with a high level of doomness still present.
The Stone – »Kosturnice« – Balkan metal institution that never disappoints – one of their best for sure.
Besides that, classic metal is always somewhere on the playlist. It’s important to stay true to your roots.

Do you have a memory of a song or an album that got you into doom metal and slow & heavy music in general?
Elusive God: Candlemass – »Nightfall« and Solitude Aeturnus – »Beyond The Crimson Horizon«.
Of course, there were a bunch of other bands and releases, but these albums, and especially the golden era of Candlemass (with Messiah Marcolin) opened the door of DOOM 🙂

What do you think is the most important thing a newcomer band should do to get attention?
Elusive God: Make music as best and honest you can for the pure sake of making music and creativity.
Be realistic with your expectations and don’t let some minor disappointments, bullshit or obstacles stand in your way.
Then, if you’re persistent and consistent in making quality music, attention should come all by itself.
And most important – don’t forget to enjoy every step of the way.

Do you have any plans for the future at this moment?
Elusive God: The plan is to have the new album finished by the end of this year and hopefully have it released in the first half of 2022. This is our main focus at the moment.
Along the way we’ll make a new music video and try to take things to a next level when it comes to visuals.

Thanks for this interview! Do you have any last words?
Elusive God: Thank you for giving us space on your web site and introducing us to your readers.
Silence is our DOOM \m/