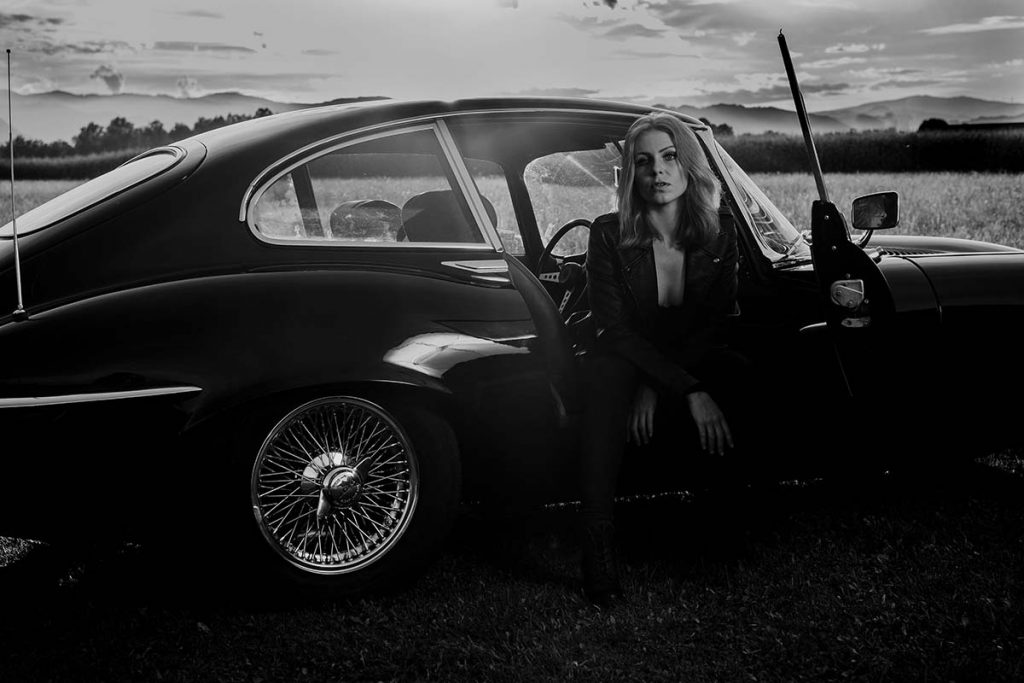 Dusk is a heavy rock band from Austria, formed in 2018.

Flaming riffs meet fast drums and gnarling bass. Dirty but soulful voice on top. Focusing on heavy riffage their songs guide you through the dusty realms of rock music.

I had a chance to chat a little bit with charming lead vocalist Denika Denkmair about forming the band, upcoming debut album, singing progress, W.A.S.P., musical influences, her guilty pleasures and more!

Let’s begin at the start. Tell me about forming Dusk and how everything began.
Denika: Well, it all started with our former band Black Lynx which was basically a doom metal/rock band. At a certain point some members including myself realized that we choose the wrong lineup over and over again so we barely had the opportunity to play gigs and work on new material. See, Peter and I decided to form a new and heavier band. At this certain point we all agreed that we wanted to work on music which is something between Black Trip (now Vojd) and Kadavar. In the end we sticked to more 70’s sounding material because it aligned better with my voice and enabled more variations for my timbre.

You were also going through some personal changes lately…
Denika: Unfortunately we lost Peter our former drummer. We hope he can fulfill his dream to form a successful punk band. Still we’re overly glad that Mano from Roadwolf joined us last summer. This change made us even more powerful concerning the cohesion within the band. Each of us has the same vision regarding the sound of Dusk and is overly motivated to bring our first LP to life.

Dusk is considered to be heavy rock/proto-metal band. So, what are your strongest influences?
Denika: We all agree that we’re pretty much influenced by Blue Öyster Cult, Roky Erickson, Pentagram, Black Sabbath, The Devil’s Blood and W.A.S.P. So it’s a kind of a mix in-between different musical decades. Nonetheless we’ve made the 70’s our favourite one.

What about you as a singer? Who got the biggest impact on your singing? I’ve read someone said that the raspiness in your voice on the first EP is close to Lemmy 🙂
Denika: Haha… That really honored me when I read the review about our first EP »High Radiation« but it was never intended to sound like Lemmy. Actually the biggest impact on my singing has W.A.S.P’s singer Blackie Lawless. To me he’s the god of rythym and rhyme. If you’re really into powerful songwriting and entertaining storytelling then he’s your man. On top of that he was a fantastic showman. Apart from Blackie I adore Farida Lemouchi’s voice. It’s so special and impressive. And on top of that I guess we all love Bonnie Tyler. Haha…

Have you ever seen W.A.S.P. live? I had a chance once in Maribor and at Metal Fest 2012 in Mining.
Denika: Wow, now I’m jealous. Haha…
Unfortunately not but we tried to get the support slot for their show in Vienna in 2020 but then Covid messed this plan up. 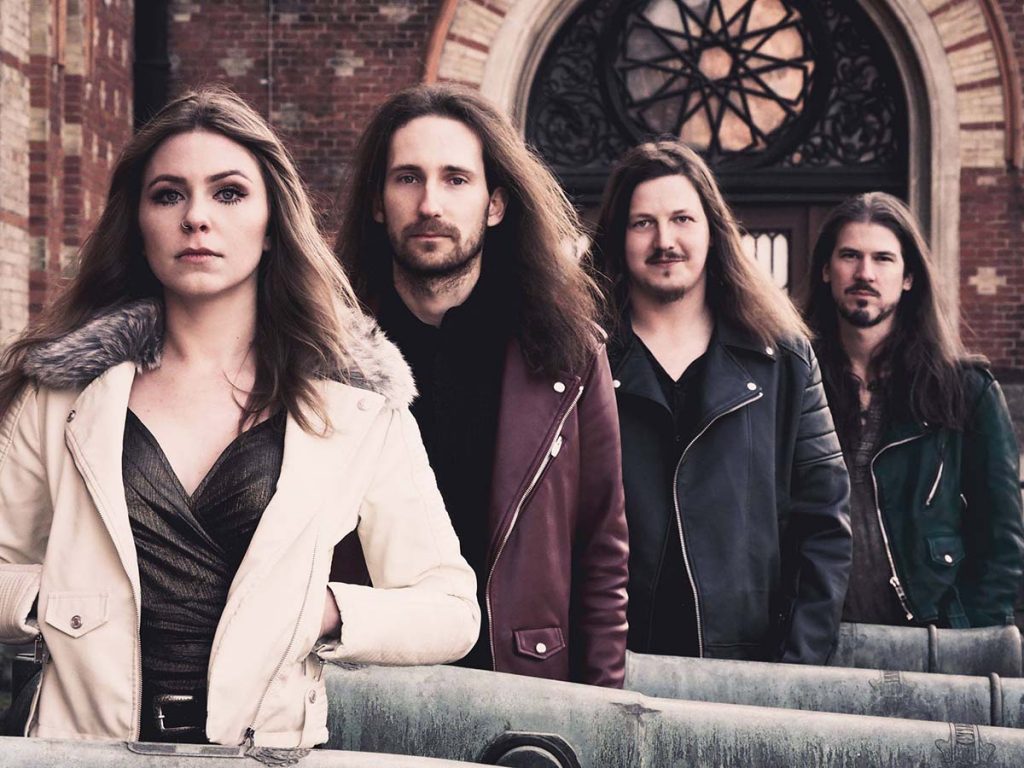 How your songwritting process looks like?
Denika: Mostly See and I are trying to find catchy riffs together and form it with vocal line ideas. Once we wrote a good basic version of a chorus and verse part we get the band together and work on these ideas. When it comes to lyrical songwriting I often write down some parts which come to my mind during the day. If I’m lucky and I’m inspired enough by my ideas I move on with writing. And of course the books I’m reading during songwriting processes have a huge impact on the outcome.

You already put out two EPs. When could we expect your first full-length album?
Denika: Well, we currently are trying to become more complex in structuring our songs and at the same time we are working on bringing in some melancholic vibes and tunes. So the LP will be a bit different to our EPs. But we expect it somewhere around the end of 2021 and beginning of 2022. Covid definitely slowed us down but we try to stay positive and focused in these times.

What do you think is the biggest progress that you made from »High Radiation« to »The Toll«?
Denika: For »The Toll« I forced myself to encounter some hidden facets of my voice including my head register and as you may know my voice in »High Radiation« you can hear that I don’t often use it. I definitely grew better in switching between head voice and chest voice.

And what would you say about the responses from the people?
Denika: After releasing a record, each of us is in a way nervously waiting on how the response of the audience out there will be. Online our new EP was warmly welcomed on NWOTHM full albums and Mr Doom 666 so we’re more than grateful and content with the community out there who is listening to our stuff. Thanks for that and Cheers!

You are signed to Electric Fire Records. Can you tell me something more about your record label?
Denika: Right. Electric Fire Records is a Viennese independent Label. Currently it holds 12 bands under contract but it’s growing fast and that’s great. Our label is mainly focussed on stoner rock and in general rock music.

As I’ve seen you played the most shows in your hometown Graz and in Vienna. Where else you’ve been touring til now?
Denika: Correct. We’ve also played in Carinthia (AUT), Salzburg (AUT), Linz (AUT), Malmö (SWE), Berlin (GER) and Budapest (HUN).

Can you share some thoughts about your trip to Malmö? How is Sweden in general?
Denika: It’s a pretty long way up there but it was definitely worth it. Although we stuck together in the van most of the time, we had a good time together. And we learned that it’s very important who you choose as a mercher but we now know better.
For me Sweden – concerning our experience I can only talk about the South – is overly gorgeous. The folks we met were hospitable, open-minded and very supportive. Unfortunately we didn’t had that much time in Sweden.

You already supported some bigger bands, such as Lucifer, Radio Moscow and Demon Head. What could you say about these shows? Did you get along well with bands like that?
Denika: Yes, definitely. We had a great time with Radio Moscow and Demon Head. These two shows were definitely unforgetable nights. And of course we were super excited to meet Nicke Andersson and Linus Björklund when we supported Lucifer in Vienna.

And what was your best show ever?
Denika: Definitely the one with Demon Head! We can’t wait to have the opportunity to share the stage with them again. This band is so unique and inspiring and hey three guitarists on stage! Wow I would love to have that in Dusk too. Haha… Furthermore we enjoyed an event called »Women of Rock« in Vienna. The lineup consisted of local bands and friends from Vu Garde and Bird Of Prey. When you looked down to the audience it didn’t feel like a local show. 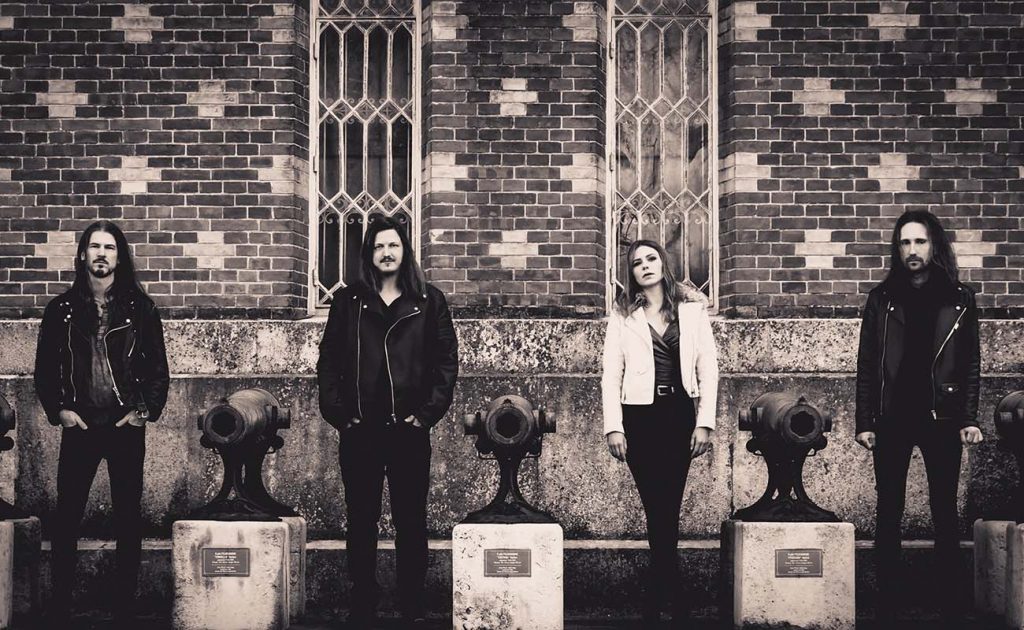 Do you maybe see yourself as role model for the younger girls or women in general?
Denika: Actually, I’d say no. I had never the intenion to be one but I have one thing to add here. if you want to achieve something as a girl/woman or boy/man just take constructive feedback serious. There will come a lot of negative chatterboxes across your way. Don’t let these people stop you, don’t even listen it’s useless. And it doesn’t matter if you are female or male aims are achieved by work and good ideas nothing else.

You will also be featuring on the new Ewïg Frost album (black’n’roll band from Vienna). How was that collaboration for you?
Denika: Since Ewïg Frost planned backing vocals, we’ve been pretty quick with the recording session. I think it just took one and half hour if I remember correctly. Working together with Nitro was great and inspiring and it was definitely a lesson for me to. I wasn’t well enough prepared for the pace with which Ewïg Frost comes along.

Can you tell me about the stoner/doom community in Austria? It seems that the scene in your country is growing pretty big.
Denika: I was into stoner rock 5 years ago. I’m not longer part of the community since I’m more into heavy metal and rock music so I really don’t know but I guess it had its peak 3 years ago. Anyway, Vienna has a small doom metal community. I really appreciate event series like Doom Over Vienna.

Do you still remember how you got into heavy music?
Denika: Yes it actually started with the Wolfmother hype. I my opinion still a gorgeous band and encountering Blue Öyster Cult whilst watching my back then favourite series Supernatural. Then I moved further to bands like Kadavar, Orange Goblin, Ghost, Electric Wizard and Ruby The Hatchet and finally sticked with Demon, W.A.S.P. and In Solitude and many more. But this doesn’t mean that I just listen to heavy metal or rock music. I think you need a good mix of different genres to keep your creativity going.

Have you ever sacrificed anything in your life for a better future of your band?
Denika: Yes, indeed. Time haha. A lot of time. Concerts and festivals cause we had to hit the studio or played a gig ourselves but I still don’t regret any sacrifice I made to keep Dusk alive together with the boys.

What’s the best advice you’ve ever been given as a musician?
Denika: I can remember a friend of mine giving me the advice to change the style of my singing a bit not it’s sound itself just the style for since we wanted to sound more old school and in the beginning I tended to sing with a too mordern sounding phrasing. So, thanks for that Mammut!

What are your guilty pleasures? 🙂
Denika: When it comes to music, I’d say Huntress, Lady Gaga and the musical Dance Of The Vampires.
With food and drinks I can say before Covid I often had way too much Whisky Cola. On top of that I love french fries and adore avocado sushi.

How did Covid-19 lockdown affect you as a band?
Denika: Actually, it slowed us down a bit but it was necessary since we wanted to work on new styles and two of us finished their study degree course and started to work in fulltime employment. The problem in times of Corona is that you don’t really work fulltime you work all time if you still have your job. And yes we grew old. Haha… We’re really pleadingly waiting for this period to end.

Can you reveal some of your future plans?
Denika: Our first LP is in progress and there will be a video release in 2021.

Thank you very much for this interview! Any last words?
Denika: Thank you too, it has been a pleasure.
In nomine Patris et Filii, et Spiritus Sancti.