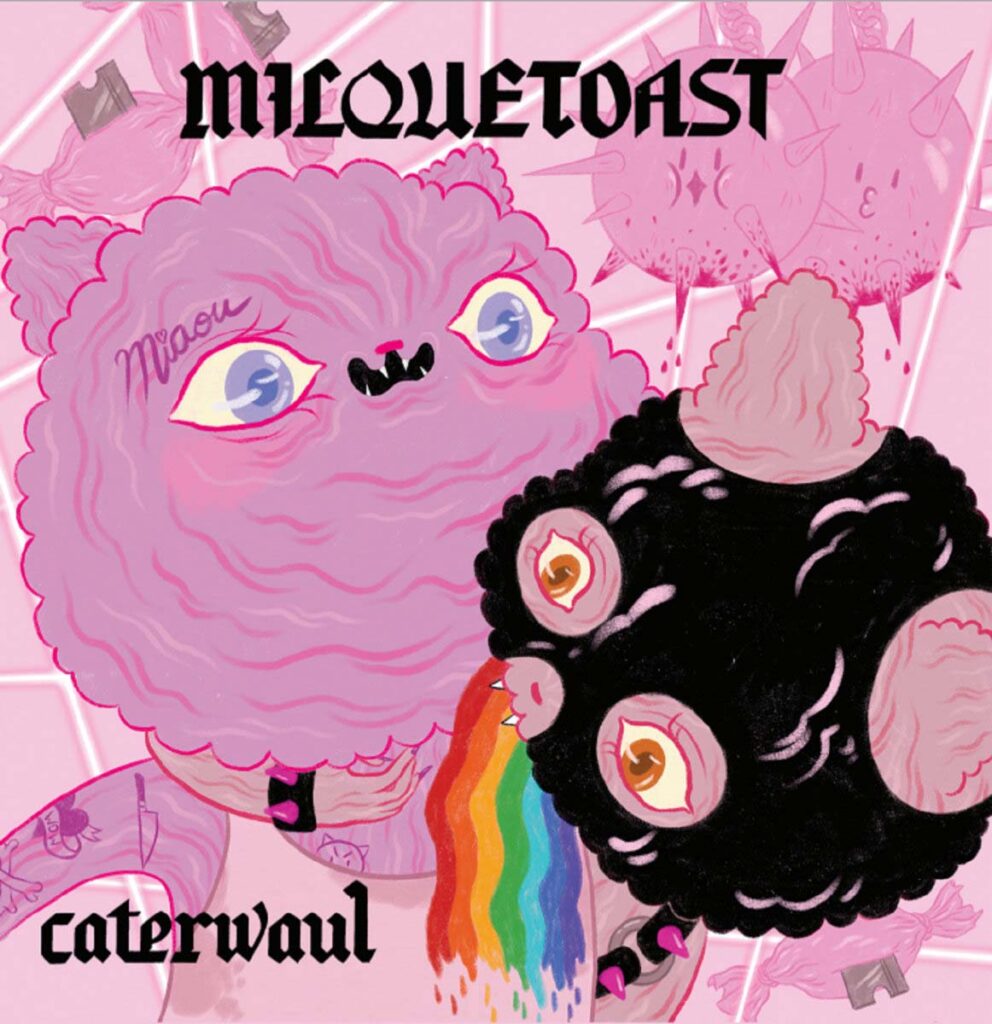 Indianapolis, Indiana based sludge punks Milquetoast are gearing up to release their debut album, »Caterwaul«, which wil see the light on January 28th, 2022 via Wise Blood Records.

All songs written and performed by Milquetoast.
Engineered and mixed by Tucker Thomasson at The Megadungeon.
Mastered by Chris Fielding at Skyhammer Studio.
Album artwork by Ellie Shvaiko.
Album layout by David Jaggar.

Indianapolis sludge punks and lords of the funderground Milquetoast bring the ruckus on their debut album, »Caterwaul«. Mastered by Chris Fielding of the mighty Conan, Milquetoast’s heavy punk fuzz and party sludge will appeal to fans of west coast anarchy like Dead Kennedys and Black Flag, the thicc riffs of Electric Wizard, and early grunge like Melvins, Mudhoney and Nirvana. Mix all those wily influences with Mike Judge’s irreverent satire and you get Milquetoast.

On stage, Milquetoast climb anything in sight and truly make the venue their playground. The trio is similarly adventurous on »Caterwaul«. Song to song, they mutate from the primal thrust of hardcore punk to cosmic stoner doom and surf rock and a thousand other weirdo microgenres. The recording and mixing by Tucker Thomasson (Throne Of Iron) captures their raw live energy. The deranged artwork by Ellie Shvaiko speaks to the album’s jubilant chaos. I mean, look at that god damn artwork. Punk rock? More like PINK ROCK, amirite? This is one of those bands and albums you use to bludgeon a jaded friend who thinks punk is too predictable. Press play and get weird ‘n’ wild with Milquetoast.

»Caterwaul« is out January 28th from Wise Blood Records on digital, CD, and cassette. Order a copy or stream Milquetoast’s singles on Bandcamp: milquetoastpunk.bandcamp.com 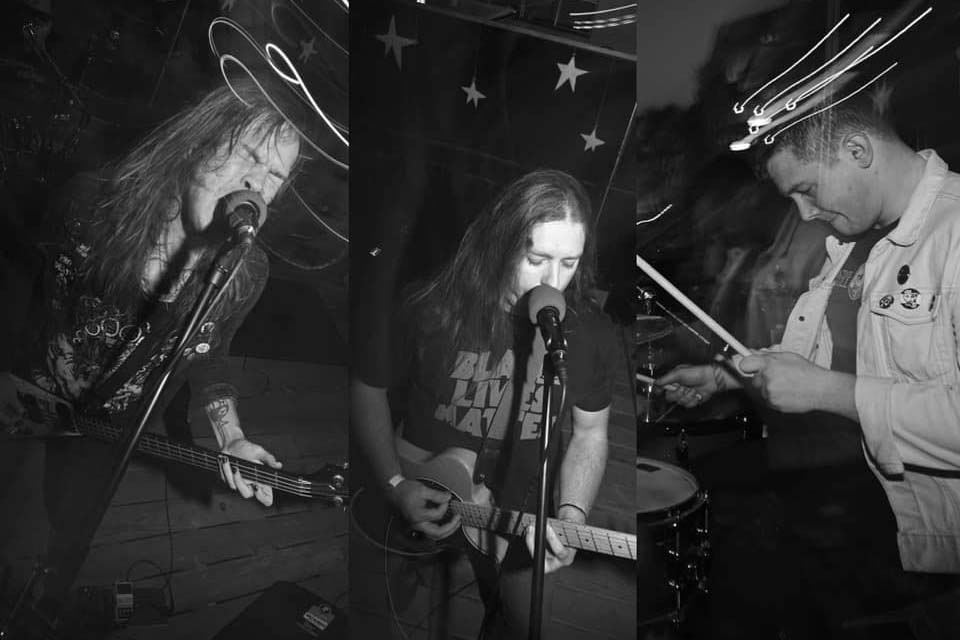 When Milquetoast (milk-ˌtōst) is used as an adjective, it means timid, meek, or unassertive. But you only need a single distorted power chord or unhinged howl from the Indiana trio’s punked-up party sludge to get sucker-punched by the band name’s irony. Milquetoast will kick 2022’s front door off its hinges with their debut LP mastered by Chris Fielding of the mighty Conan, appropriately named »Caterwaul«.

Formed in 2018 by vocalist/guitarist Ty Winslow, Milquetoast was devised as an expression of weirdo punk fury. In fact, it was Winslow’s penchant for loud riffs and cheeky vibes that initially lured vocalist/bassist Andy Bowerman as a collaborator.

“In a church 2.5 hours in the middle of nowhere,” Bowerman recalls, “I was looking out into the melee [of a mosh pit] and seeing crossdressing members of [Winslow’s then-band] Battersea riding each other around like jousting mounts. So the friendship came easy-and came often.”

After recruiting drumming dynamo Nick James, the band’s unique impish energy took shape. Gather the mops that soaked up sweat and blood from stages in the ’80s west coast punk and Seattle grunge scenes. Squeeze the fluids into a shot glass with Mike Judge’s satire distilled into whiskey. Add in the doom and heavy metal pedigrees of the band’s dual-screamers, and you get »Caterwaul«.

Winslow describes Milquetoast as “raucous heavy rock with the simplicity and irreverence of punk.” Think genre-burning bands like Melvins and Mudhoney, along with the sneering punk of Black Flag, Child Bite, and Dead Kennedys. 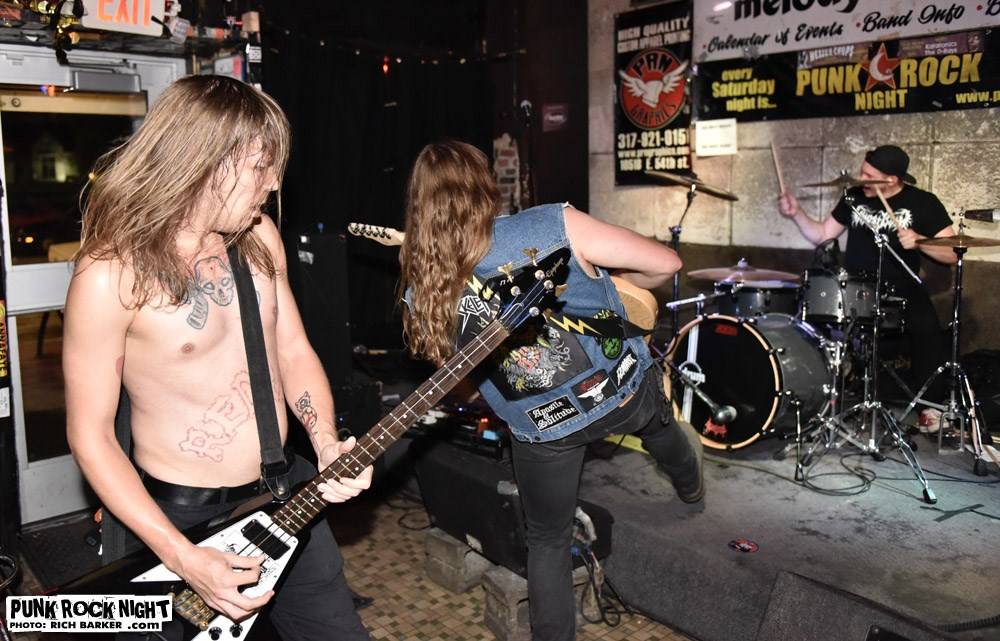 Bowerman adds their own colorful summary: “Minutemen and Fu Manchu wearing Celtic Frost t-shirts.” Top that off with James’ observation that “most folks will be able to tell that we’re a bunch of stoner doom metal nerds attempting to play punk.”

Mostly written during the pandemic and the last turbulent presidency, »Caterwaul«’s lyrical focus is a snapshot of political incompetence and social decay. Despite grim subjects ripped from the headlines, Milquetoast laugh through the absurdity. The cover art by Ellie Shvaiko captures that dichotomy of grimy heaviness and pastel-pink levity. The recording was tracked by band ally Tucker Thomasson of Throne of Iron in one insane day to achieve fast ‘n’ loose performances true to the band’s manic stage energy. Because at the end of the day, Milquetoast is first and foremost about the live spectacle.

“Our approach to live shows is all about having fun,” Winslow confirms. “Fans can expect over-the-top outfits, some light-hearted razzing of the other bands, and loud rock ‘n’ roll.”

Once Covid stops being such a menace, Milquetoast may troll a town near you. Until then, Wise Blood Records will release »Caterwaul« on January 28th, 2022. Get weird. Get wild. Get ready for Milquetoast.