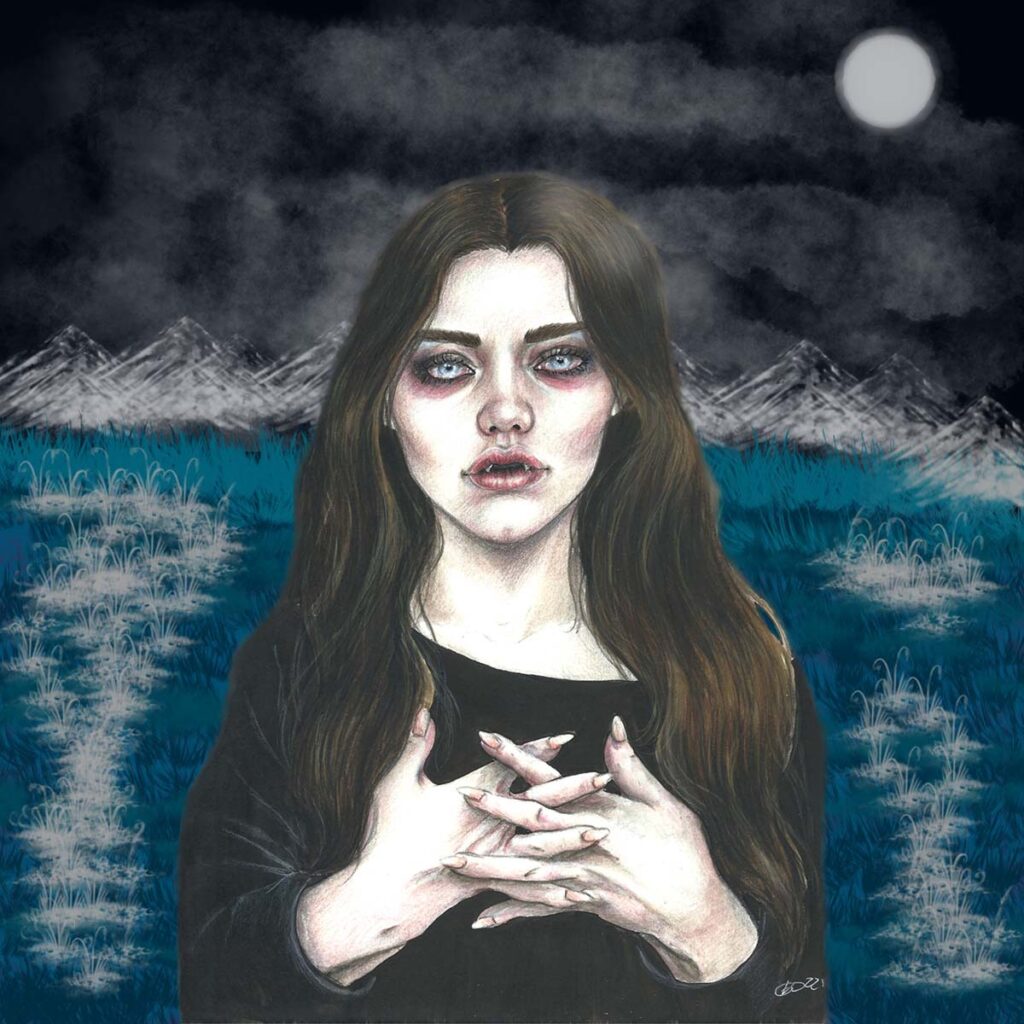 »Wilhelmina« is a concept of five gothic/doom tracks, with strong influences in raw black metal as in the soundtracks of old Italian horror films. This work, which in some of its points cites Beethoven’s famous »Moonlight Sonata« and the traditional Judeo-Spanish song »La Prima Vez«, tells the story of a man who falls in love with the woman who sadly discovers she is a vampire thirsty for blood.

The project was carried out entirely in-house, from its conception and writing to the processing of the final product. A non-casual choice that betrays the desire to propose an artisanal product through a DIY ethic.

Mastermind Omar Jarid adds: “I started conceiving my first EP at the end of 2019 as an outlet for some personal events, but due to the pandemic and so many things that happened in my life, only last year I found a way to finish writing it.

I think it is important, for anyone who makes art and has something to shout out to the world, to stop for a moment to give life to that nagging idea that can’t wait to go out and, just like a craftsman who shapes his works, to create it step-by-step a musical dress for it.”

Scurìu started to conceive his first EP at the end of 2019 as an outlet for some personal events. The first track he composed was the dark ambient outro at the end of the release. It came out while he was in front of the computer in a free moment, only to decide as he composed all the work that this would be the final track. Although it is not his main genre, he likes from time to time to compose instrumental songs that are not metal but fit with the proposal.

In the concept he decided not to start the story exactly from the beginning, but from the end, in which the dying character (“This my last dawn in this life”) presents a short background and then, track by track, tells his story.

He is a huge fan of the DIY ethic and for this reason he decided to personally take care of his music as far as he could. Scurìu likes that sense of “craftsmanship” that he found in genres such as punk or black metal, as he also likes old Italian horror films, in which there was no computer graphics but where you could find credible effects with little budget, and a lot of imagination. In particular, one of the films that most inspires him is »Death Smiled At The Murderer«, a 1973 film directed by the late Joe D’Amato.

Scurìu (Cagliari’s dialect word for “dark”) is a one-man blackened doom metal band created in 2018 to give voice to its founder’s personal interests and issues. In 2020 Scurìu releases its first work »Demo V1.1«, embryo of a will to blend doom metal’s slow and gloomy atmosphere to black metal and (to a lesser degree) dark ambient’s rawness, along with other influences.

In 2021 Scurìu joins the artistic collective Carcerem Lupi Underground Resistance, contributing to their third split album »From The Deepest Mist Of The Underground« with the dark ambient track »Score For A Scene Ov Death Underneath A Starry Night«.

In December 2021 Scurìu also releases a digital single in collaboration with Naples-based dungeon synth artist Black Flame. In the same Scurìu partecipated to the compilation »Eurodance, The Metal Way” with a cover of Corona’s hit »The Rhythm Of The Night”.