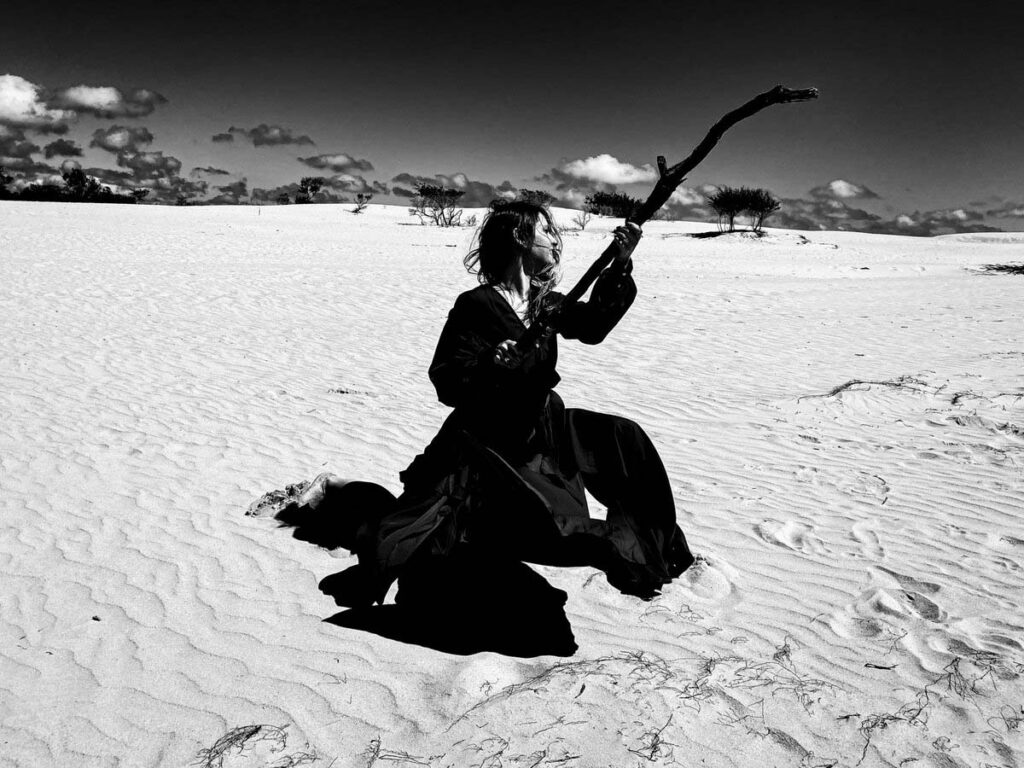 Melbourne, Australia based ambient dream folk artist Plum Green has revealed her latest in a series of stirring videos with »Eyes Shut«. The track is taken from her new full-length album, »Somnambulistic«, which was released on September 17th, 2021 via Nefarious Industries.

Green comments: “The video for »Eyes Shut« is premiered today by Treble. »Eyes Shut« is a very important song to me personally, it reinforced the importance of giving yourself space to become mentally strong. The video was filmed in the forest beside my house. We also have 6 dates booked for the tour of Europe! It’s a good day.” 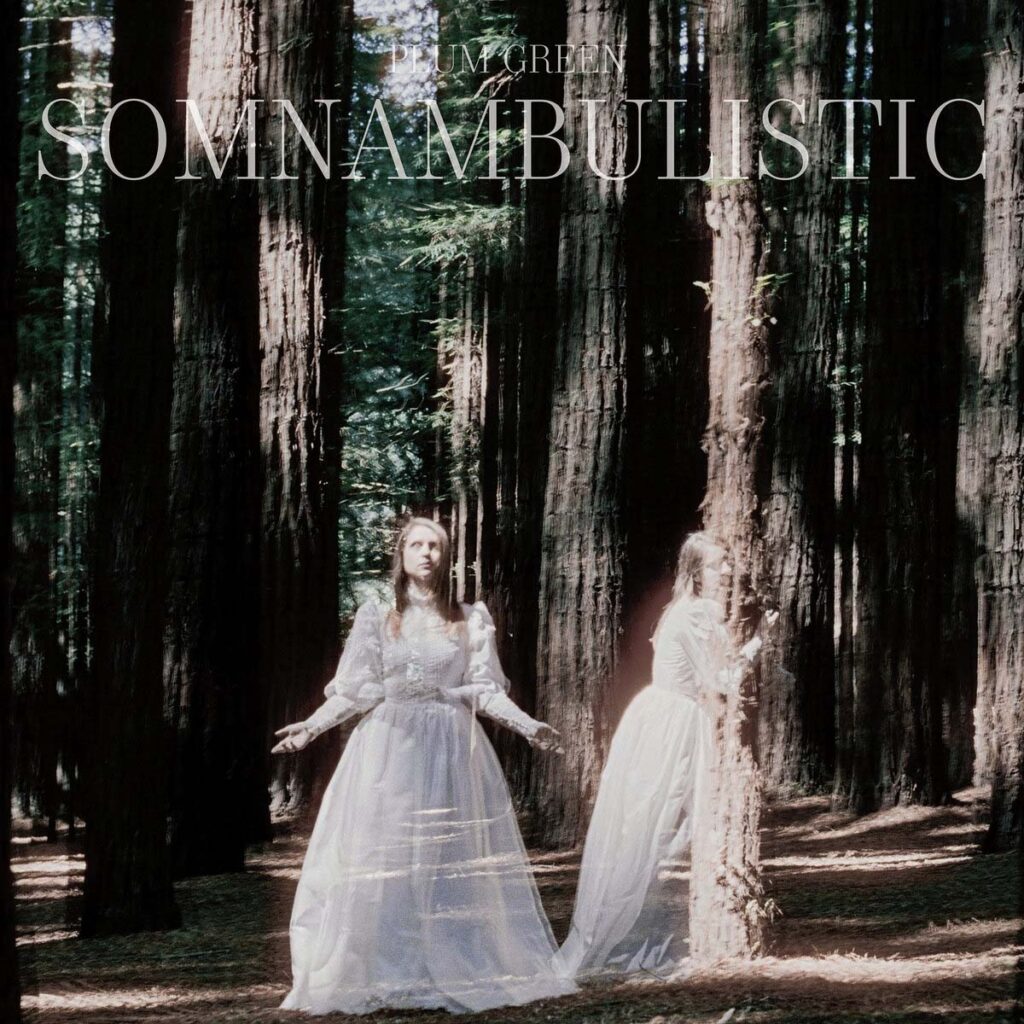 Melbourne-based ambient dream folk alchemist Plum Green has revealed her latest in a series of stirring videos with »Eyes Shut«. Now playing at Treble, the hymn comes off her captivating »Somnambulistic« full-length, released earlier this Fall via Nefarious Industries.

»Somnambulistic« is a rousing collection of dark lullabies. Each of its nine stirring tracks ebb and flow with otherworldly grace manifesting one pulsing dream narrative. Guided by guitar, Plum Green’s voice travels through walls of bowed soundscapes. Offers Green of the latest track, “A nocturnal initiation, coaxing the restless towards sleep. The song and video are woven together in a calming enchantment to slow the mind and guide the attention inward before lifting the veil between this realm and the unconscious empire of the dreamer.”

Adds Treble, “The track is a stark and chilling psychedelic folk track with gothic overtones, shimmering electric guitar leads juxtaposed against a simple minor-key strum and Green’s voice, while accompanied by a video of a shadowy figure moving between trees. It’s an appropriately chilly track and dark clip to pair with the season.”

Produced and mixed by Daniel J. Cross at The Pool Room in Melbourne, Australia with string quartet engineered by Jesse Oberin at Crosstown Studios, s variety of different instruments are featured including classical string arrangement and the Melbourne Town Hall Grand Organ, which is said to be the largest musical instrument in the Southern Hemisphere. »Somnambulistic« also features collaborators Tonal Noir from Macedonia and Valentina Veil (VV & The Void) from Berlin.

»Somnambulistic« is available on LP and digital formats. Find ordering options at THIS LOCATION where the record can be streamed in its stunning entirety.

Born in a squat in England, raised in New Zealand, and presently residing in Australia, Plum Green combines elements of folk, grunge, goth, and post-rock with her dark and moving lyrical prose. Green’s voice aches with the ocean’s desire to connect and divide. Summoning ghosts, lovers, and other creatures of the night, Green’s poignant hymns are at once deep, haunting, and alluring.

However, it is within the live setting where Plum Green truly comes into her own. Performances take on the quality of a ritual journey into darkness, delivering listeners safely back in the sunlight on the other side. Her shows are intimate affairs where time seems to draw to a standstill, her sheer ability to hold an audience with just her voice and a guitar something that must be witnessed in person to truly comprehend. Accompanied by guitarist Daniel Cross, there is an intensity to the proceedings with the pair often working together in a subconscious state of euphonious symbiosis.

“Dream Like ethereal and intangible. »Somnambulistic« is a genuine labor of love where nothing is overlooked and everything is intentional, it adds to the mythos that is Plum Green, mysterious, deeply personal, and epitomizing power in its silence, presence in its restraint, and a unique talent that is in complete control of its destiny.” – Metal Roos

“This is a great effort from Plum Green to create a sound space of dark beauty. »Somnambulistic« has such a wealth of quiet, powerful moments that really feel like you’re being steered through a dream of a strange and gorgeous place by a guide who has a tender care for the smaller places, both inner and outer body.” – Distorted Sound

“»Somnambulistic« is for anyone who appreciates great songwriting or music which hits the rare mark of being both ethereal and wholly engaging. A sprawling, inescapable black and white watercolor, this is an album which will beguile you and send you willfully stumbling into its twisting arms.” – Moshpit Nation

“With cinematic sound design, eerie vocals, and intimate lyrics, »Somnambulistic« by Plum Green is a dreamy and pleasantly nightmarish folk masterclass.” – Everything Is Noise

“…by far Plum Green’s best effort to date. It’s dark, poetic, alluring. A tempting yet slightly sinister listen. It will beguile you. The music is exquisitely crafted and seeps into the soundtrack of your subconscious.” – Ambient Light

“The passage from discomfort through catharsis is insistently intimate, largely featuring acoustic arrangement and a short-distanced vocal which is unadorned, unmanipulated for the most part… The artist plays the role of confidant well but doesn’t forget to sustain her performative folk cadence, pushing things along and keeping the vibe malleable from song to song for the sake of a larger emotional progression.” – Grizzly Butts

“…a haunting, dreamlike folk song in the vein of Marissa Nadler and Hope Sandoval, which comes with an equally hypnotic video.” – BrooklynVegan on “People Of The Snow”

“Adjectives such as bewitching and spellbinding can be used to describe this listening experience such is its impact. I recall a contributor to the stoner rock/doom metal documentary Such Hawks, Such Hounds claim that the more politically turbulent the world is, the more otherworldly the music tends to be, and when it comes to »Somnambulistic« she is spot on in her analysis.” – The Sleeping Shaman