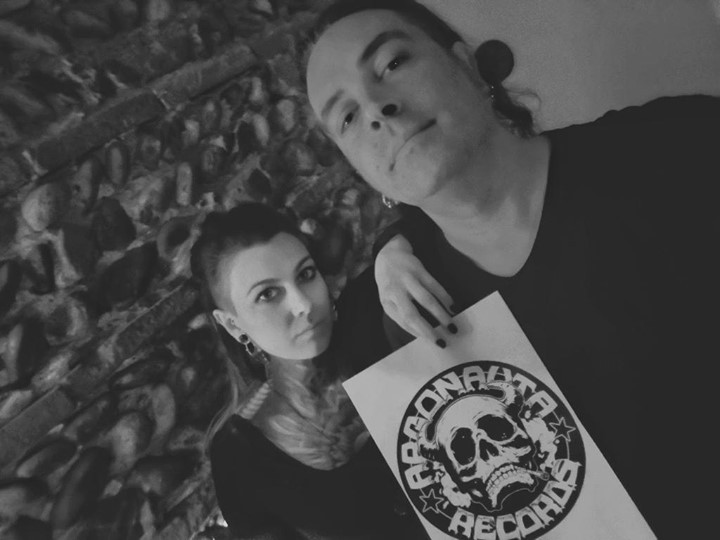 French doom metal duo Indigo Raven signs with Argonauta Records for the release of their debut album, coming out in 2021. To kick off the new year and the signing, the band just released a cover version of the Mazzy Star classic »Into Dust«.

“Picking the right words to describe why we chose to make a cover of »Into Dust« is quite tricky, there’s a lot, and nothing to say really.” Indigo Raven states.

“Maybe just because it is a beautiful song, a haunting one, a discreet classic, in which words can be understood and felt, in a very personal and intimate way. It is talking for sure about love and death, never overrated poetic themes, universal ones that everyone can understand in his way. The perfect balance of this song gives enough space to make you dream along with enough emotion to arouse inner melancholy.

Our choice of approach is darker and heavier than the original version, but we respectfully gave it a different shade. Moreover, it was an interesting exercise to work on something really different from its original music genre.”

By the end of last year, heavy doom duo Indigo Raven announced their signing with powerhouse label Argonauta Records, who will proudly release the band’s debut album during 2021!

Indigo Raven, who formed in 2019 in Toulouse, France, emerges from the Peaceville Three’s influence with a modern sludge approach. The simple but not unsophisticated instrumental foundation of the duo, coloured by a shamanic sound and these occult, haunting vocals, immediatly caught the attention by the Italian record label.

“We are very proud and grateful to announce our recent partnership with our friends Argonauta Records!” the band comments. “That’s the beginning of an important adventure for us, the first step promoting our raging enthusiasm to go deeper and explore new gloomy paths on the album we’re working on at the moment. It feels awesome being supported that way, having people around the world believing in our music and vision.

Now more than ever, it is crucial to support each other, share in any way we can, about art, culture, music, poetry, spirituality, to debate and question. To think and feel. To remember what is truly important, to remember who we are and what reunites us.

We cannot wait to doom further together!”

To kick off the new year and Indigo Raven’s signing with one of the leading underground labels of all that is heavy in style, the band just released a cover version of the Mazzy Star classic »Into Dust«!

Furthermore, Indigo Raven’s 2020- debut EP is now also available as cassette, with a full-length album to follow through Argonauta Records later this year. Make sure to give ear, highly recommended for fans of Windhand or Cocteau Twins.